Renaissance Aliens: Fazio Cardano's 1491 Close Encounter Content from the guide to life, the universe and everything 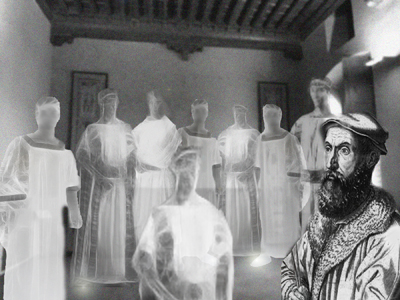 The question of whether there are, or are not, extraterrestrials among us, is a debate that far predates the invention of the tinfoil hat. Take Fazio Cordano, a 15th-Century Italian jurist and mathematician who was also a good friend of Leonardo da Vinci's. Cardano claimed – many times, according to his son – to have had a three-hour gab session once with some very bright aliens. Cardano's son, the equally brilliant and eccentric Gerolamo Cardano, told his father's story in his famous book, De subtilitate rerum (1552)1. A century later, Cyrano de Bergerac was inspired by Cardano to write his own science fiction work, Voyage dans la lune (1619).

Comparison between Cyrano's account and Cardano's throws up discrepancies: Cyrano says Cardano met 'inhabitants of the Moon', whereas Cardano was not clear where his mysterious visitors came from. Were they aliens from another planet, or supernatural beings from another dimension? That distinction seems to have been less important to the early-modern mind than to modern investigators. Still the story is intriguing, and if we believe Cardano, he had a close encounter of some kind.

A Close Encounter in Milan

According to the Cardanos, the meeting with the aliens took place on 13 August, 14912. Fazio was at home at about eight o'clock in the evening, when seven men materialised in his kitchen. The men were wearing Greek-style robes, or 'togas', of silk, and 'shining shoes'.

Fazio failed to be alarmed at this alien intrusion, but we should point out, as Gerolamo did, that Fazio had been talking to invisible people for 30 years. He claimed to have a 'familiar spirit'. Fazio seems never to have been arrested for this. Either Milan was awfully broad-minded in 1491, or Fazio was extremely well-connected.

Fazio was impressed by the well-dressed, good-looking strangers, who seemed to be between 30 and 40 years old. When he asked them how they got there – since they obviously hadn't come in the door – they explained that they were 'made of air'.

Ufologist's question: Could this be interpreted to mean that they were holographic projections? It is tempting to speculate, but the early-modern text leaves all the good bits out.

Fazio had a long conversation with these people. They told him that they lived about 300 years, were advanced intellectually, and were more closely related to 'the gods' than to humans. They appeared to hang around Earth, however. The two leaders claimed to be holding public lecture series. They laid claim to superior intelligence and inside knowledge, such as where important rare books and lost treasures were kept.

Internet observer's note: A claim to inside knowledge of lost treasure is always a handy attention-getter. But was this the E.T. version of the Nigerian prince scam? At least, they didn't ask Fazio for money.

Fazio asked them why, if they knew so much, they didn't just share the information with the rest of the planet. At this point, they explained about what we might call the Prime Directive. They weren't allowed to interfere, they claimed, under penalty of law. And then, of course, they admitted to what might seem like cheating, by sending people information in their dreams, and through inspiration and such. They also claimed to have taught world leaders:

...the basest of them were the guardian spirits of the noblest of men, just as men of low degree are the trainers of good dogs and horses.
– Gerolamo Cordano, De subtilitate rerum, Book XIX, quoted in translation in Anon., Comte de Gabalis, 1913.

Fazio doesn't seem to have been insulted by this. But then, he must have been used to it. After all, he'd spent 30 years talking to spirits. What Fazio wanted to know, though, was who made the Universe, how, and why – the usual sort of question. This is when the aliens got into an argument.

The tallest of them denied that God had made the world from eternity. On the contrary, the other added that God created it from moment to moment, so that should He desist for an instant the world would perish.

Fazio found all this fascinating – he was a philosopher, after all, and this was great after-dinner conversation. They talked on and on, and the aliens turned out to be huge fans of the 12th-Century philosopher Averroes. Eventually, they left the way they came. Fazio, apparently, dined out on his acquaintance with the aliens for the rest of his life.

The observer is left with a question. Why did scientists in the 15th and 16th centuries have so little problem with such phenomena as familiar spirits and alien visitations? Perhaps it would be better to ask: why do we have so many problems with this account? Is it because we parse our knowledge and experience so differently?

Fazio Cardano was a jurist and a mathematician. He made some important discoveries about algebra. In addition, he was fascinated by perspective, and discussed it with his friend Leonardo. Fazio's son, Gerolamo, was even more famous as a mathematician. In addition to mathematics and physics, Gerolamo studied medicine. He had an excellent reputation as a doctor. He had a less excellent reputation as a gambler, but he did do pioneering work in the science of probability. Gerolamo's book on system gambling wasn't published until the 1660s.

These early modern thinkers were polymaths by inclination and in practice. Perhaps that is why they failed to have a problem with paranormal phenomena. To them, the world of knowledge was all one giant, multifaceted puzzle. Could aliens beam into your kitchen to chat about Averroes? Why not? A fact like that either was true, or it wasn't. It was not false simply because 'that sort of thing doesn't happen.' Superstition and pre-conceived notions were not part of the equation. At least, not for the Cardanos.

On the other hand, there is a conspicuous lack of corroborative evidence of these extraterrestrial visitors. If they did show up, they were remarkably discreet about it. Only Fazio seems to have met them. It would be a while before more people reported meeting aliens. It seems a shame that Albert K Bender and Fazio Cardano never met. They might have had a lot to talk about.

For a free copy of Gerolamo Cardano's De subtilitate rerum, go here. You'll have to read it in Latin, though.

Cyrano de Bergerac's A Voyage to the Moon is available online. You can read this work in English, lucky you.

1The book was famous in the 16th Century. We're not claiming it's on the New York Times' best-seller list.2This was little over a year before Columbus' landmark voyage. This is not to imply correlation, or even causality – merely to place the incident in historical perspective.