Mozart's Clarinet Concerto Content from the guide to life, the universe and everything 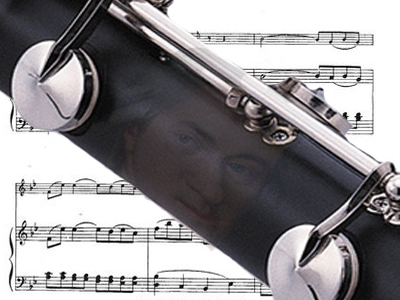 The Clarinet Concerto by Wolfgang Amadè Mozart1 is an outstandingly beautiful piece of music and one of the most popular things he wrote. You may remember it from the film Out of Africa, in which the big game hunter Denys Finch-Hatton (Robert Redford) played it on the savannas of Africa on a wind-up gramophone.

Since it is the only concerto for clarinet that Mozart produced, it doesn't bear any title other than 'Clarinet Concerto in A by Mozart'. It does, however, have a catalogue number: K622. All Mozart's works were catalogued by musicologist Koechel, who numbered them to prevent confusion over the titles.

A concerto is a piece of music for a solo instrument backed by a small orchestra. Concertos give plenty of scope for the solo player to show off their skill. They tend to be anything from about 20 minutes to about 40 minutes in length. Most concertos are divided into sections, known as movements, with a break in between. There are usually three movements, although concertos with anything from two to ten movements have been written. The movements are supposed to contrast with each other.

The Clarinet Concerto has three movements, and follows the quick-slow-quick pattern, with a slow movement sandwiched between two quicker ones. It is the slow movement that is best known, with its serene melody, but there is some very fine music in the other two movements as well.

The Concerto is one of the last things that Mozart wrote. He is reckoned to have written it in the autumn of 1791 a couple of months before he died. The Clarinet Concerto was written for Mozart's friend, Anton Stadler (1752–1812), who was a professional clarinettist.

Stadler had a rather unusual clarinet. Like many clarinets of the day, it was pitched in A, but it was extra long, allowing it to play extra low notes. The standard A clarinet can play down to C#. Stadler's instrument could play an extra four semitones below that, down to the keynote of A. Stadler loved low notes and his clarinet allowed him to fully exploit the lower ranges of the instrument. The clarinet also looked unusual: you can see a rather crude picture of it at Mark Charette's Woodwind.org site. Mozart's writing used the extra low notes to the full.

Because no one else had a clarinet like Stadler's, somebody (it is not known who) adapted the Concerto so that it could be played on a standard clarinet. This adapted version was published in 1802 and has survived to the present day, but unfortunately the original score that Mozart gave to Stadler has been lost. According to legend, Stadler pawned his briefcase with the score inside when he was strapped for cash.

Up to very recently, only the adapted concerto was known and it was this that was always performed, on a standard A clarinet.

In the late 20th Century, scholars produced a 'reconstruction' of the original Stadler version. This is basically an educated guess at what Mozart originally wrote. It takes patterns in the music which are slightly odd, and changes them to make sense by using the extra low notes of Stadler's clarinet.

For example, in the first movement, starting at bar 331, the same phrase is played six times: twice in a high register, then four times in a medium register. This would sound much better if played twice in the high register, then twice in the medium register and finally twice in a low register. Unfortunately, the low register is below the range of the standard clarinet, but it was possible on Stadler's clarinet, so this is probably what Mozart wrote.

In other places, a run of notes downwards suddenly jumps up an octave when it reaches the bottom note of the standard clarinet. It is clear this would have continued downwards on the clarinet capable of playing the low notes. You can see this in the following example from the second movement, bars 45-46. Click on the musical notes to hear how they sound2.

Whether you read music or not, you can see that the first phrase does a sudden jump upwards in the middle of a downward run, which is inelegant. The second version continues down into the notes that only Stadler's clarinet could play. This is the reconstructed version.

There are significant differences between the clarinet part in the Winterthur Fragment and the standard version. The reconstruction uses these differences to guess what Mozart would have done in the version he wrote for Stadler.

Performance of the Concerto

Just about every clarinettist worth their salt has performed the concerto. It's actually quite an easy piece to play - this is one of the great things about Mozart; he could make simple music which sounds amazing. If you are familiar with the big violin or piano concertos, you will know that you have to be a very experienced player before you can perform them. By contrast, any clarinettist would expect to be able to perform the Mozart Clarinet Concerto before finishing his or her studies.

For those who want to perform the reconstructed 'original' version of the concerto, a clarinet is available which can play the special low notes. This is known as a Basset Clarinet to distinguish it from the standard A clarinet. Such clarinets are made specially to perform this work, and one other work by Mozart which was also written for Stadler, the Clarinet Quintet3 in A.

If you are buying a recording of the work, it may not be clear whether it is the 'standard' or 'reconstructed' version. If you are used to one version, you may be slightly surprised by the other. It's generally accepted that the reconstructed version is better. In either version, there's no doubt that Mozart's Clarinet Concerto in A is a beautiful piece of music.

1Mozart invented the name Amadè for himself. This was an Italianised version of one of his baptismal names, Theophilus in Greek or Gottlieb in German, which means 'beloved of God'. He never spelled it Amadeus except when he jokingly wrote Wolfgangus Amadeus Mozartus.2The music should play as a midi sound. On some devices it will download a file which you will have to open. You may have to press the Back button to return to this Entry after the music has played.3A clarinet quintet is a piece written for the combination of clarinet, two violins, viola and cello.