The First Commercial Aeroplane Flight Content from the guide to life, the universe and everything 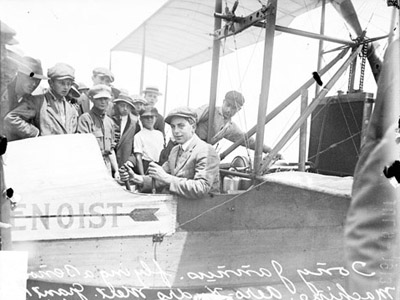 On New Year's Day, 1 January, 1914, several thousand people gathered on the pier at Saint Petersburg, Florida. A careful look to the north east would reveal the city of Tampa's skyline beyond the waters of the huge bay, a straight distance of 17 miles, 27km or 14 nautical miles away. Another group of thousands waited there for the historic event that was about to occur.

A small airboat1 waited floating nearby in the water, ready for its mission.

It had been only ten years since the Wright Brothers had made their historic first flight and the sight of an aeroplane was still a rare occurrence. Several manufacturers had started aircraft production and regularly sponsored promotional tours to promote sales. Thomas W Benoist2 of St Louis thought he could increase sales by establishing a scheduled air service between two cities with a set fare, similar to the services offered by the railways and steamship companies. His airboat design eliminated the need for expensive airstrips at each end of the flight. It only remained to locate two cities a suitable distance apart that both had sufficient harbour facilities, and a group who would agree to subsidise the venture.

Air transportation had been introduced several years earlier by the German company DELAG, which was an acronym for Deutsche Luftschiffahrts-Aktiengesellschaft (German for 'German Airship Navigation Company'), using lighter-than-air Zeppelins. This would be the first attempt to use heavier-than-air craft in a commercial venture.

About halfway down the west coast of Florida lies Tampa Bay. The city of Tampa was established on the north east corner of the lower bay at the mouth of the Hillsborough River. Steamboat service with Havana, Cuba, was established in the late 19th Century, and the city became a manufacturing centre for fine cigars.

An emigrant from Russia, Peter Demens took control of the Orange Belt Rail Road. In 1888 he pushed his line to the southern part of the peninsula that forms the western shore of the bay. The city he founded at the terminus of this line became a winter resort that catered to those who could travel south to spend the winter in a warmer climate; each spring most of them would return to their northern homes. The new city would bear the name of Demens' boyhood home, Saint Petersburg. One of the prominent features of the Saint Petersburg waterfront was a large pier3.

The railway journey between the two cities required almost 12 hours of travel; an automobile trip along the crude roads doubled the travel time. Even a steamboat would take two hours, if one was available. A flight by air was expected to require only 22 minutes.

When Benoist approached the city council of Tampa, his request for funds was rejected; however, the Saint Petersburg council saw another opportunity to entice tourists to visit. The airline would be based in Saint Petersburg.

The model IV Benoist Airboat was built of wood and canvas, the main fuselage was a boat hull, and a pontoon was mounted at the tip of each wing. The pilot and passenger shared a single board bench in the open cockpit, exposed to the air and spray from the water. Flights were scheduled for two times each day and the fare was set at $5.00 per passenger. Only one full sized person could be accommodated for each flight, although many later flights would carry two smaller passengers4.

For the privilege of being the first airline passenger the ticket was put up for auction. The winning bid was $400.

The plane flew at about six feet (2m) above the surface of the bay and followed the coastline for most of the trip, crossing the open water at its narrowest point (about three miles or 5km). At one point on the first flight the engine began to run roughly, and the plane set down on the bay for a brief repair. The plane, pilot and passenger were soon airborne again, arriving in Tampa after only 23 minutes. After a news conference and suitable photo opportunities they made the return trip across the bay.

Anthony Habersack Jannus, more familiarly known as Tony Jannus, was born on 22 July, 1889. He became intrigued by aeroplanes and taught himself to fly5, becoming a test pilot for Curtis Aircraft. His flying experience made him the logical choice for the inaugural flight at Tampa Bay.

He had joined Benoist and began setting records for passenger miles travelled. While demonstrating an early war-plane in Russia, he lost power and crashed into the Black Sea on 12 October, 1916. He did not survive the incident.

The winner of the auction was former Saint Petersburg mayor Abram C Pheil. He wore a raincoat for protection from the expected water spray. After they had arrived in Tampa one of the reporters asked him about the grease that was on his hands. He replied he was 'assisting Mr Jannus to adjust some machinery'. A brief telephone call to his home confirmed the success of the first flight.

The fledgling airline began regular operations, adding two more aircraft to its fleet. Along with the scheduled flights between the two cities, charter flights were also offered for other destinations in the Tampa Bay area. The Tampa Port Inspector insisted that the pilots be properly licensed for the service. On the licence issued to Tony Jannus the word 'steamboat' is crossed out and replaced by the title 'aeroplane'. Issued on 17 February, 1914, this is often considered the first commercial airline pilot's licence awarded.

The contract with the city was for a three month period, expiring on 31 March, 1914. The service continued for another five weeks after that, but as the residents began to return to their homes in the north, demand for flights declined. The service was terminated, but the seeds of a new industry had been sown.

Today air travel is the obvious choice for any long-distance journey. On 13 June, 1995, the one billionth passenger to travel by air was recorded. The modern jet-liner with reclining chairs, pressurized cabins and flight attendants to serve food and beverages are a far cry from the open cockpit and chain-driven propeller of 1914. Before you complain about the discomforts of travel, remember Tony Jannus and Abe Pheil.

1A seaplane, or more precisely a flying boat with the passenger/cargo area providing the main flotation.2Pronounced 'Ben-Wah'.3The future of the pier is a major political issue at the time of writing (early 2014).4The passenger size was based on a weight of 200 pounds (90kg) - a 120 pound (54kg) adult and a 60 pound (27kg) child could travel together.5Formal flight lessons were still many years away.