Felicette the Cat: A 1963 Space Odyssey (Well, A Short Odyssey) Content from the guide to life, the universe and everything 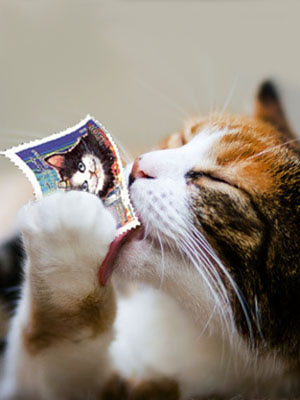 What was the first biological life form in space1? If you said 'dog' or 'monkey', you're wrong. It was fruit flies. Aboard a V-2 rocket flung by a hyperactive US Air Force in 19472. They landed fine, thank you very much, hale and hearty and doing what fruit flies do. One giant leap for insectkind.

The problem was, although fruit flies could demonstrate to early spaceflight technicians that it was possible for a biological organism to survive weightlessness and atmospheric re-entry, when it came to other questions, Drosophilia melanogaster wasn't very informative. After all, before Yuri Gagarin survived that first hair-raising manned flight into Earth orbit and returned to eat his sausage, scientists were not 100% sure that blasting into microgravity like that wouldn't make you go crazy. (That's why they didn't let Gagarin steer his own capsule.) There were a lot of things scientists needed to know before risking a fellow human out there. The result? Many, many brave astronauts of various species – mice, guinea pigs, monkeys, dogs, chimpanzees, some ill-fated frogs – were launched, totally without their informed consent, into space. Some were even lucky enough to survive.

It is a well-known fact that Laika, the first canine in space, did not survive. Ham the NASA chimp got back okay, having made headlines in 1961. Ham prepared the way for Alan Shepard's flight three months later. Shepard pulled some of the same levers Ham did, only without the banana pellet reward. (We assume Shepard's contract precluded the electroshock conditioning, as well.)

Yes, humankind owes a debt of gratitude to our zoonauts. But when preparing our roll of space-animal honour, we should stop to consider the interesting case of Félix and Félicette, the French cat-onauts. There's a minor puzzle here: just who did what out in the Algerian desert back in 1963? And why do the postage stamps tell another story?

In 1963, French rocket scientists3 decided to be the first (and so far, only) people to launch cats into space. Their reason appears to have been that cats were small and fit nicely into the monitoring 'suits'. It is to be assumed that sooner or later, even rocket scientists figured out that safe-handling practices involved wearing gloves. Cats being the splendidly adapted creatures that they are, it was unnecessary to seek out pedigreed specimens: a few dozen strays were picked up around town, and 'training' began.

Being placed in a centrifuge is bound to annoy a cat. Apparently, though, it does its appetite no harm. About ten of the moggies were washed out of spaceflight candidate school for overeating. One guesses they got too big for their spacesuits. Cats will do that. Finally, one streetwise kitty from the back alleys of Paris emerged as the frontrunner for First Feline in Space: Félix, a very clever fellow indeed. Félix was shipped off to the rocket base in the Algerian desert...

...where he proved his cleverness by escaping.

Félix may be the only astronaut in history to have gone completely AWOL. At any rate, it was necessary to use the Backup Kitty.

On 18 October, 1963, in the absence of Félix, no doubt on his way to the Casbah, a somewhat slower female cat named Félicette was strapped into the Véronique AG1 rocket and launched into her 15 minutes of fame. She sported an electronic transmitter in her forehead that not only gave her a rakish 'space alien' look, but also transmitted neurological data to the scientists below.

Fifteen minutes was the length of the flight, which reached an altitude of 130 miles. Félicette arrived safely home, no doubt meowing loudly and demanding treats. On 24 October, the French sent up an unnamed cat, which was unfortunately lost, a martyr to the space race.

Félix and Félicette, however, went down in history – and left us a bit of a mystery.

The Centre d'Enseignement et de Recherches de Médecine Aéronautique were proud of 'their' accomplishment4, and produced 'autographed' photos (with pawprint) of the lady astronaut. Therefore, we can presume this is a picture of Félicette, and that she was the black-and-white kitty on the left in the 'cat spacesuit' photo. The commemorative stamps, however, look different.

Thirty years after the landmark event, several postage stamps were produced by former French colonies to mark the remarkable feat of Félicette. On the first stamp, however – the one from the Republic of Niger – Félicette is called 'Félix'. Simple mix-up or unforgiveable act of sexism? Did they not want to admit that a female was the first in space? Besides, the Niger stamp shows a longhaired cat. Félicette was a shorthair.

Other stamps repeated these errors, and it is obvious that the picture of the cat has been clumsily retouched. The stamp of the Republic of Chad includes Laika and several human astronauts, but continues to call the cat 'Félix' and to use the retouched longhair photo. Was it a matter of 'on stamps, all cats look alike'? Or was there genuine confusion as to which cat did what? Perhaps we will never know.

Whether or not she is represented correctly by posterity, Félicette made her contribution to history by boldly going where no kitty had gone before – certainly not the cowardly (but intelligent) Félix.

1If you don't count space-borne microbes that may – or may not – have arrived here from elsewhere aboard comets or meteors.2US researchers had a lot of captured German V-2 rockets. They used them to stage high-altitude flights up to 144,000 feet, with mice, hamsters, guinea pigs, cats, dogs, frogs, goldfish and monkeys as passengers. The first flight to reach space contained the fruit flies.3In this case, the term 'rocket scientists' refers to their profession only.4As Henri le chat noir is fond of remarking, humans are always taking the credit.