The Beaulieu Dairy Content from the guide to life, the universe and everything 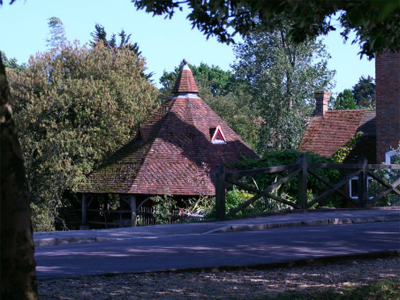 If you ever visit The New Forest in Hampshire you are almost certain to pass through Beaulieu. As you travel through the village, on the B3054 Palace Lane, you'll go over a bridge, across the Beaulieu River. As you cross this bridge, you may notice what appears to be a round building with a sectioned cone-shaped roof of red clay tiles.

If you take the trouble to park your car in Beaulieu and stroll through the village, go and have a closer look at this unusual and photogenic little building.

This building, dating from around 1820, is not open to the public, neither are there are any arrangements for viewing it. The dairy is situated to the rear of Mill House1, in the grounds of the Beaulieu Estate.

The first thing you will notice is that it is not round but octagonal, the tiled roof having eight sections finished with a conical finial around five feet high. The roof has two vents or inverted V-shaped windows on opposing sections of the roof, one facing the road and the other facing the river.

The overall height of the building is approximately 9m (30 feet). The walls are of red brick; the roof extends out beyond the walls providing a veranda that surrounds the structure. The eight posts that support the roof are timber construction supported on brick and concrete bases. The door and the diamond-glazed lead light windows open out under the cover of this veranda, and there is an inverted V-shaped porch over the door.

The northern and eastern sides of this curious structure are situated on a parapet ten feet above the river. All in all, it is an unusual and unique structure.

Although the dairy was built around 1820, in 1940 it underwent some quite unusual alterations. The bridge across the Beaulieu River at this point is the last crossing before the river reaches the sea. This made it a very important road to protect in the event of invasion during the war. Surprise and concealment were considered of paramount importance for defensive positions. It was decided by the military authorities to convert the dairy into a pillbox2. Great care was taken not to disturb the structure of the dairy, and the door and firing points of the pillbox were aligned with the door and windows of the dairy. The walls and roof were of thick reinforced concrete, with a stout inward-opening steel door to withstand attack.

Evidence of the care taken during construction of the pillbox can be seen. The windows were left in position and only the small glass panes were removed to allow clear view. This was an excellent job of concealment3. If this pillbox had seen any action it would have been very difficult to overcome.

There is little doubt the external fabric of the dairy would have been destroyed but the garrison of the pillbox would have survived for some time. The field of fire would have prevented enemy forces from using or capturing the bridge.

Beaulieu is in Hampshire on the south coast of England, and as such was very close to enemy-occupied France. It is located 14 miles from the important port of Southampton and 20 miles, as the crow flies, from the Royal Navy headquarters at Portsmouth. During WWII both Portsmouth and Southampton were strategic key German targets and among the top ten most-bombed areas of the United Kingdom.

Beaulieu's bridge is on an important east-west route across the river. That made Beaulieu itself a key point for any invasion force to capture and continue its advance to the west. A rapid advance could then be made onto Salisbury plain4 from the south. Also access to the west would enable the seizure of ports such as Bristol, Weymouth, Exmouth and Plymouth, all vital for lifeline supplies from the USA.

Although there had been a functional airfield to the west of Beaulieu from 1910, it was simply too small. So in 1942 the site of the airfield was moved and enlarged to cope with an RAF Bomber Command squadron, No 2245. Using B-24D Consolidated Liberator aircraft, from March 1944 Beaulieu airfield became a base for the USAAF 9th Air Force. The pillbox was incorporated into the defensive perimeter of this important airfield, which was just 2.5 miles to the west of Beaulieu.

Fortunately the pillbox was never used and is now just an interesting reminder of a more troubled past. It just goes to show that not everything is as it first appears. The Beaulieu Dairy is a Heritage Building and can be found on the Scheduled Ancient Monuments listing.

1Currently a private Guest House.2A pillbox was a concrete and brick guard post, with reinforced apertures for firing weapons through. The name pillbox was coined because these structures resembled Victorian pillboxes.3There were many such concealed pillboxes, some disguised as shops, and in London one was even built to look like an off licence (liquor store).4The home of the British Army.5Originally deployed in the Bay of Biscay against U-Boats.