Olivers Battery Hill Fort Hampshire Content from the guide to life, the universe and everything 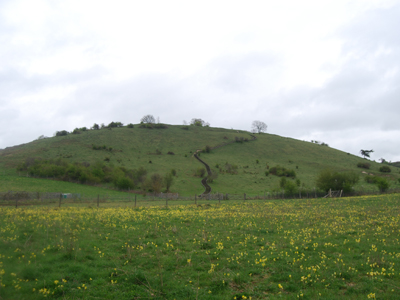 Olivers Battery1 is a splendid Iron Age hill fort2, built on a chalk hill overlooking the ancient city of Winchester in the county of Hampshire England. Unusually for a hill fort, it is defended on the western side by the River Itchen and its water meadows. In this position, it guards the north-south route along the river. The hill, properly known as St Catherine's Hill, is 318ft (97m) high and approximately a mile south of the city. The hill was once connected to Tyford down to the east, but has been cut off by the construction of the M3 motorway. The scars can still be seen around junction 11, where the chalk still shines white.

The hill is currently owned by Winchester College and marks the western edge of the South Downs National Park. The hill also forms a part of the East Hampshire Area of Outstanding Natural Beauty. St Catherine's Hill has been designated as a Site of Special Scientific Interest and has become a nature reserve cared for by the Hampshire Wildlife Trust.

The hill fort, now a Scheduled Ancient Monument was constructed in the Iron Age around 600-300 BC as a single bank with ditch in front. The fort had an entrance at the southern and northern end. Although it is not known for sure, the builders of the fort could have been the local tribe. At this time the principal tribe of the area were the Atrebates*, who at the time of the Roman invasion had a capital at Silchester.

The hill has a long history of use3 lasting nearly 3,000 years, from the Iron Age, Roman, and Anglo-Saxon. The fort appears to have been abandoned by the original builders around the middle of the Iron Age 150-100 BC. So it appears this was another of the many hill forts that was never besieged during the Roman invasion.

Although the fort has never been fully excavated, we know that there were several round houses built within it. The hill was then used as a Saxon cemetery after it was abandoned.

The finds of pottery and a spindle whorl show that the main period of occupation was the Iron Age and the homes were also the typical round houses of the period4 centred around the house of the headman or chief. The settlement would have been laid out with care with ordered lanes and paths allowing access to the homes. Livestock such as sheep and pigs were kept by individuals and so the round houses would have had pens to keep them from wandering. Storage houses for food have been seen around the site, grain would have been stored below ground in pits. The individual craftsmen would have carried out their work at their homes, however some trades, such as metal working, may have been practiced at the edge of the settlement or in sparsely settled areas because of risk of fire. Living in a hill fort would have likely been busy, noisy, not very private and probably, by our standards, smelly.

Later evidence of Roman activity is also shown by pottery finds and a coin. The Anglo-Saxons placed burials within the earthwork ditch and a fine Anglo-Saxon bowl was found in a grave. In the 12th Century a chapel was built in the centre of the hill fort in honour of St Catherine. Today there is a copse of beech trees that mark the site of St Catherine's chapel. During the Black Death of the 1660s, several plague pits were dug in the area to the west of the hill for the dead of Winchester and the surrounding area.

There is no known occupation after the Iron Age prior to the Civil War period, however records indicate that the fort was used as a military camp by Parliamentarian forces. Later between 1647 and 1710 a turf cut Mizmaze was made within the enclosure.

Why 'Olivers Battery' and not St Catherine's Hill?

The Olivers Battery name dates back to the English Civil War and is specifically associated with Oliver Cromwell's siege of Winchester in 1645. Although there is no evidence that Cromwell ever visited the camp, a map of 1780 refers to the area as 'Cromwell's Camp' and later maps show it as 'Oliver Cromwell's Battery'. The ancient earthwork may well have provided a suitable campsite for the besieging Parliamentarian forces. It has been said that cannon of the period would have lacked the range to fire on Winchester Castle and city walls from the so-called battery site. However it has been stated in contemporary documents that a standard field cannon of the period had an effective range of 1,500 strides5. Today a stride is calculated to be one yard*; this means a cannon placed on Olivers Battery with a range of 1,500 yards could easily reach to within 40 feet6 of the Cathedral. That means 60% of the city was in range of the Parliamentary cannon. The threat of this would have caused panic in a town with mainly wooden framed buildings. This could be why the fort was given the name of Olivers Battery and why it has stayed in local memory.

Later History of the Hill

During the centuries after the Civil War, Olivers Battery was left as open downland grazed by sheep. Permanent settlements only appeared in the early years of the 20th Century with the establishment of a military camp. During the First World War the army maintained an extensive Veterinary Hospital for horses. After the war, the camp was split up into small-holdings with army huts being used as dwellings. Gradually, a community developed as huts were replaced with houses and other homes were built.

This hill marks the western edge of the South Downs National Park, and it also forms a part of an area designated the East Hampshire Area of Outstanding Natural Beauty. St Catherine's Hill has been declared a Site of Special Scientific Interest as there are many butterflies that may be seen on the downs including the Adonis Blue, Chalk Hill Blue, Common Blue, Small Skipper, Silver-spotted Skipper, Small Heath, Essex Skipper, Meadow Brown and the Marbled White.

It is an excellent area for walking. The long distance footpaths include the Clarendon Way from Winchester to Salisbury and the footpath over the M3 to the top of the Twyford Down and the ancient trackway and earthworks known as the The Dongas. There are car parking areas near the hill, however they are isolated and there is the possibility of theft in quieter times so do take care.

It is also possible to walk up the hill fort from the footpath that follows the Itchen Navigation7. There is a wooden stair cut into the hillside allowing an easy climb to the top of the western side of the hill.

How to get to Olivers Battery Hill Fort

It is often difficult to find sites or points of interest mentioned, so map reference points are provided here relating to the text.

Just copy and paste the numbers into a computer search or map search bar and it will take straight to the site indicated. It also works on some sat nav systems.

1Not to be confused with Olivers Battery near Basing House Hampshire -- -- (51.2763, - 1.04652) also used in the English Civil War, during the siege of Basing House, and now beneath a housing estate.2English/Heritage official List entry Number: 235449.3 Not occupation or necessarily continual use, part of the time simple grazing.4Called round houses because they were round (as such they were simpler to build than buildings with corners), with simple wattle and daub walls and thatched roof.5Some heavy cannon had a range of up to 2,400 yards (2.2km).6Around half a football pitch.7The Itchen Navigation is one of the oldest canals in England and an super walk in its own right.