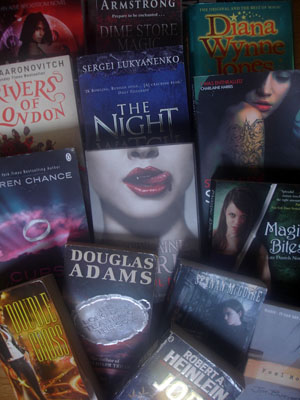 Once upon a time there were spaceships and hobbits and really scary things in the woodshed, and they were called Science Fiction, Fantasy and Horror. Sci-fi was the serious older brother spending five days a week on the steady job holding a mirror up to social issues, while at the weekend he would break out the really big tech and go and fight bug-eyed monsters on the red planet with the three moons in a galaxy far far away. Fantasy was the sensitive middle child, a bit prone to wandering off for months and coming back with the head of Evil on a pike and that ring he wouldn't show anyone, ever. And Horror, well, Horror pulled the wings off flies and yearned to chop innocent authors' feet off with an axe1. But they rubbed along fairly well and exchanged polite presents at Christmas and all until one day they found that they had a brash new younger sister, Urban Fantasy.

What is Urban Fantasy?

Urban Fantasy is a genre of fantasy stories populated by the supernatural creatures humans have been telling each other about for millennia. Especially, but not exclusively, the (Gothicly) Horrific ones. Vampires, angels, ghosts, werewolves, trolls, fairies, gods, demons, minor deities, dragons, witches and genies. Authors get bonus points the more obscure-but-established their otherworldly characters are, or if they can make us look at an old favourite in a new way2.

Fuathan don't come out until after dark. Sunlight kills them.
Like vampires?
Kind of. Very mean, sub-aquatic vampires who don't need to drink your blood, but might do it anyway, just for fun.
– Somerset McCoy, The Mirrored Gate

So far, so not that unusual you might be thinking. True. What has made Urban Fantasy develop a character of its own is that these tales take place in a largely urban civilisation3. Often this is a roughly contemporary Earth, although it is also increasingly common to find books where the setting is a few hundred years in the future or a few hundred years in the past. Sometimes the action even takes place in another universe or on another planet. Funnily enough, the lifestyles that have evolved there are really quite familiar and everybody carries a goblin-powered mobile phone. Sort of thing.

What happened to the alpha-wolf?
LEGOs.
'Legos'? It sounded Greek but I couldn't recall anything mythological with that name. Wasn't it an island?
He was carrying a load of laundry into the basement and tripped on the old set of LEGOs his kids left on the stairs. Broke two ribs and an ankle.
– Ilona Andrews, Magic Bites

What do the Muggles Think?

Either the magical world is hidden from the sight of ordinary humans, or the magical creatures are out of the wardrobe loud and proud. Frequently, and this is particularly true if the reveal happened recently or looks in any way imminent, the interaction between the magical and mundane worlds is a source of stress; the whole set up, in fact, is perfect for exploring the idea of what constitutes normal and how far we can co-exist with difference in our society. It is not surprising then that this tension is often one of the major sub-plots in the story.

I figured even the most jaded and cynical inhabitant might report a bloody girl in a party dress carrying a severed head by its hair.
– Faith Hunter, Skinwalker

What sort of Stories do they tell?

Despite this encroachment on Sci-fi's social commmentary role, by far the most popular plotline in Urban Fantasy is the detective story, the police procedural or even the spy thriller albeit one which is dressed up in funny ears and complicated by the Other. Often there is a strong noir flavour about it too. That said, some books are also quite prone to giving Fantasy's epic fights between Good vs Evil a spin and so Urban Fantasy denizens frequently save the world as well as catch the murderer. Questing, however, is not usually part of the deal. Physical questing that is. Many books, and especially many series, centre around the main character's personal journey to the centre of their psychological universe, especially when they start out by discovering powers they never expected to have. Which is quite often.

I don't want to live in a world where the strong rule and the weak cower. I'd rather make a place where things are a little quieter. Where trolls stay the hell under their bridges and where elves don't come swooping out to snatch children from their cradles. Where vampires respect the limits, and where the faeries mind their p's and q's. My name is Harry Blackstone Copperfield Dresden. Conjure by it at your own risk. When things get strange, when what goes bump in the night flicks on the lights, when no one else can help you, give me a call. I'm in the book.
– Jim Butcher, Storm Front

But this Still isn't Anything Really new, is it?

Not precisely. Many books written by many established names have covered at least some of these themes, from the dawn of Sci-fi, Fantasy and Horror and beyond, and yet nobody thought it was worth sub-dividing the existing categories to account for this. But by the late 80s the increasing number of writers such as Neil Gaiman regularly exploring the possibilities of embedding their stories in the here and now was gathering pace. The people most often credited with heralding the advent of the new genre are Charles de Lint, Terri Windig, Emma Bull and Mercedes Lackey, with their books Dreams Underfoot, Borderlands, War for the Oaks and the Diana Tregarde books respectively. And the first really established full blown series in the genre was the one about Anita Blake, Vampire Hunter by Laurell K Hamilton, currently at 20-plus books and counting.

It took a qualified wizard to detect a summoning in progress. It required only a half-literate idiot with a twitch of power and a dim idea of how to use it to attempt one. Before you knew it, a three-headed Slavonic god was wreaking havoc in downtown Atlanta, the skies were raining winged snakes, and SWAT was screaming for more ammo.
– Ilona Andrews, Magic Bites

That Doesn't Explain the Popularity

Undoubtedly the publishing boom which saw Urban Fantasy acquiring its very own labelled shelf in the libraries and bookshops of the world was encouraged by the runaway success of Harry Potter, the teenage wizard whose supernatural world mimics real life and sometimes interacts with it, and Buffy the Vampire Slayer, the TV tale of the high school student who battles vampires in the small American town of Sunnydale. The equally popular Twilight series, a three-book love story between a vampire and a human girl, must have helped tremendously too. This is unfortunate, because there is now an influential sub-genre of Urban Fantasy called Paranormal Romance. Actually, since this consists mostly of a woman having graphically-described sex with a vampire every third page, 'romance' is really quite the wrong word. Oh, ok, perhaps this is an exaggeration. It doesn't have to be a vampire4. In fact, the more exotic the lover(s) the better, and in Urban Fantasy, 'exotic' means clearly physically not human5. It probably sneaks in under the 'romance' title because despite the copious amounts of sex, the eventual goal is still the Happily Ever After climax6.

Straightaway, she'd called to the guard, 'Oh, boys?' She'd sauntered to the glass in only her black lace bra and panties. 'I need some assistance'. When they slowed, agog, she'd purred, 'Can one of you help me find my orgasm?'
– Kresley Cole, Dreams of a Dark Warrior

Whatever the reason, the result is that the bookstore chain Waterstones has labelled the whole category 'Dark Fantasy', and the libraries tend to shelve everything involving a leading female character and some supernatural beings under that 'Paranormal Romance' label. Along with the bare-chested smouldering heroes on the covers of the more romance-oriented books, or women bulging out of tight-fitting leather and forced into improbable but suggestive stances involving a lot of bare leg on the rest7, this has probably had a lot to do with fostering the impression that there is something a bit lightweight about Urban Fantasy books. 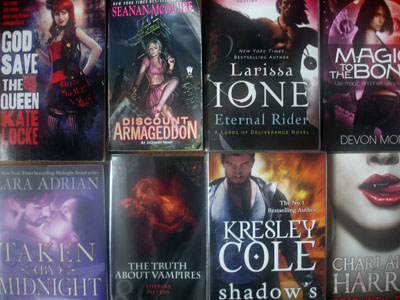 Not for men, then?

Nothing to stop them reading it. However, as well as the covers and the impressive amount of kissing that takes place even in many of the series which are not obviously knicker-dampeners, Urban Fantasy books are frequently written by women, and feature strong female leads. Strong as in tough-minded, of course, but also strong as in the fact that magic or supernatural powers allows women the almost unparalleled opportunity to kick male, female and monster butt. And so that is what they do. With extreme glee for the most part. For some reason this is assumed not to appeal to men.

That took balls.
'Please', I said with a snort, 'that took ovaries. Of which I have two.'
– Darynda Jones, First Grave on the Right

Male authors, or women writing about male lead characters, or anybody writing without giving their characters lengthy romantic time outs from sashaying confidently into a vampire stronghold and demanding information with menaces do now seem to be making headway. Not that the books about strong females with a werewolf boyfriend are necessarily bad, of course. Far from it, in fact. There are a number of writers out there who have garnered well-deserved critical as well as popular acclaim.

He wasn't that good looking, he had the social skills of a wet cat and the patience of a caffeinated hummingbird.
– Karen Chance, Curse the Dawn

However, now that saturation point has probably been reached in the less serious, more exploitative end of the market, it will be interesting to see how the Urban Fantasyists develop the genre further. A great deal of crossover with Steampunk seems to be one option. Currently there seem to be a large number of stories featuring a Queen Victoria, Sherlock Holmsalikes, goggles, airships and the difficulties of fighting vampires while wearing a bustle on the market.

Highland werewolves had a reputation for doing atrocious and highly unwarranted 'things', like wearing smoking jackets to the dinner table.
– Gail Carriger, Soulless

Another way might be through the cinema. At the moment there are some very in your face posters for films promising updated fairy tales, showing male and female characters in tight leather toting big guns, which certainly seems to tick most of Urban Fantasy's boxes. Could this be an attempt to suck in a more male audience?

Only time will tell.

Kelley Armstrong: Tales of the Otherworld

Gena Showalter: Lords of the Underworld

1There's one in every family.2Mind you, vampires who merely sparkle in sunlight is pushing it.3The name is a bit of a giveaway there.4It doesn't always have to be 'a' either.5Does everyone have a lovely mental image now?6If you want to read about romance without the eye-watering sex, try the Young Adult titles, which are many, varied and often excellent. Some of them don't even have any romance either!7This trend has been brilliantly satirised by the author JC Hines, which may account for the appearance of more... restrained covers lately. For a similar project involving comics, see The Hawkeye Initiative.