Who Was Rodolphe Toepffer, and Why Did He Draw Like That? Content from the guide to life, the universe and everything 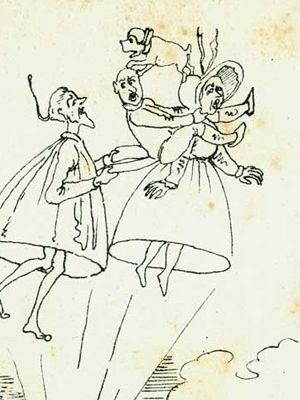 Swiss artist Adam-Wolfgang Töpffer taught the Empress Josephine how to draw. He must have taught his son to draw too, because when Rodolphe Töpffer became a teacher in 1823, he knew how to entertain his students: he drew caricatures for them1. He must have been one of the cool teachers. Then Töpffer did something that has endeared him to kids everywhere:

He invented the comic book.

What made Töpffer's drawings different from an illustrated book is the technique he used. Rather than producing an engraving, Töpffer used pen and ink on specially prepared paper. This gave him a fluid line. The process was called 'autography'.

The conventions of modern comic-book writing hadn't yet been invented. Instead of speech balloons, Töpffer used captions. His first 30-page book, Histoire de M Vieux Bois ('The Adventures of Mr Wooden Head'), was written in 1827. He didn't find a publisher until 1837 however; it takes time for innovation to catch on. In the meantime, Töpffer kept writing and drawing.

Originally, Töpffer intended his little stories merely to amuse his friends. Fortunately for posterity, one of his friends was Johann Wolfgang von Goethe. Goethe talked Töpffer into seeking a publisher for his work, although the great German poet did not live to see his friend's oeuvre in print.

Who Was Mr Wooden Head, and What Did He Do?

Mr Wooden Head does a number of interesting things:

Did people fuss about this sort of thing? Yes. Critics said – and Töpffer admitted – that this kind of 'literature' appealed primarily to children and the lower classes. There must have been a lot of kids and lower-class readers: Histoire de M Vieux Bois was also published in the US as The Adventures of Obadiah Oldbuck, in newspaper supplement form.

Töpffer went on to publish Monsieur Pencil, about the dangers of runaway artwork, Histoire d'Albert, the adventures of a journalist, Histoire de Monsieur Cryptogame, about a butterfly collector, and a mad-scientist tale, Le Docteur Festus, as a tribute to his buddy Goethe. It does appear that no motif is new under the sun. Besides being entertaining, Töpffer was influential. He is cited as an influence on Wilhelm Busch, the inventor of Max und Moritz. In that sense, Töpffer has a lot to answer for.

Geneva, Switzerland, seems to be proud of the man. They put up a bust in his honour, and there is an award for young comic artists, the Prix Rodolphe Töpffer pour la jeune bande dessinée genevoise.

If you don't find these terribly droll, blame your modern tastes. The art of cartooning has taken a number of different turns since then, and you may prefer webcomics. You may even be drawing your own.

1Rodolphe Töpffer wanted to be a full-time artist, but he had eye trouble. He studied Latin and Greek instead.