Quill Pens Content from the guide to life, the universe and everything 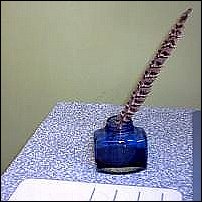 In the Middle Ages, monks throughout Europe needed to produce copies of Christian documents, but with the fall of the Roman Empire reeds from Egypt were no longer available. Goose feathers, hollow and similar in appearance to reeds, were then adapted by monks as writing instruments. There is a specific reference to a quill pen in the 7th Century writings of the Spanish theologian St Isidore of Seville, but pens fabricated from bird feathers probably date from a much earlier period.

The quill pen was the principal writing instrument used from the 6th Century until the mid-19th Century. By the late Middle Ages, the quill had become the most frequently used instrument for applying liquid mediums, usually dark paint, onto surfaces.

Monks made bird feathers into writing instruments by splitting and shaping the hollow end. The hollow 'reservoir' held the ink and the split end was used as the nib. Writing pressure produced thick and thin strokes. The writing life of the quills was extremely short and so they needed to be frequently re-trimmed.

Development of the Quill

As the quill developed, it became easier to sharpen, more flexible and broke less frequently under the writer's hand pressure. According to painters' manuals available at the time, there were detailed instructions about the fashioning of pens. The strongest quills were obtained from living birds in their new growth period, in the spring. Only the five outer wing feathers were considered suitable for writing, while the second and third were especially preferred. Thus, each bird could only supply ten - 12 good quills. Quills from the left wing were favoured, because the feathers curve outward and away from a right-handed writer. Goose feathers were the principal source of quills, though the scarcer, more expensive swan were preferred, but for making fine lines, quills from crows were better than either. Quill feathers from the eagle, owl, hawk and turkey have also been used.

The supple tip of the quill, available in varying strengths, allows different thicknesses of lines to be applied, ranging from soft and thin to broad lines. This type of pen provided a degree of writing ease and control never realised before.

Quills attained popularity quickly throughout Europe and the use of them gradually spread worldwide. The quill was of such importance that it is said that geese were specially bred by the US President Thomas Jefferson to meet his pen needs. Throughout Europe, goose farms were prevalent and thousands of geese were reared on large farms. At one point St Petersburg in Russia was sending 27,000,000 quills a year to Britain.

However, the quill pen had several disadvantages. It took a long time to prepare the quill. After plucking and sorting the birds, one technique was to bury the feathers in hot sand so that they dried off and the point became hard. Other finishing processes involved hardening feathers in acids or alum. There was an art in cutting the quill, as the more precise the cut, the finer the nib. The quill needed to be frequently dipped into the ink. Often, when applied, the ink would drip, splatter or smear. After a couple of pages of writing, the quill required sharpening with the use of a special knife, a forerunner of the penknife. Pupils in schools were taught quill preparation. As with the reed pen, the quill held little ink, so needed to be constantly re-dipped. In addition, the quill had an expected life span of only one week.

The End of an Era

By 1850, quill pen usage was fading as the quality of steel nibs improved and the development of the fountain pen accelerated. However, the main reason that the quill declined in use was that children were no longer taught how to cut quills in free public education schools. Education emphasised the teaching of writing skills rather than on the preparation of the instrument to write with. In time, the quill was forgotten and the fountain pen became the implement of choice.