Dame Edith Evans - Actress Content from the guide to life, the universe and everything 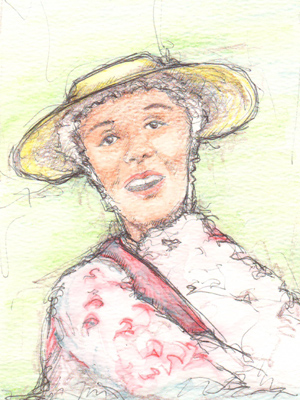 Edith Mary Evans was born on 8 February, 1888, in Pimlico, London. Her father, Ned Evans, was a civil servant and her mother, Caroline, was a nurse. There had been an older brother, sadly he died at the age of four when Edith was only two years old.

For much of her life, Edith was known as 'Ned's Girl' which would become the title of her official biography written by the actor/director Bryan Forbes.

Forbes was the only person Edith trusted with her life story. She steadfastly refused to authorise any other official biography, nor would she allow details of her personal life to be written. Forbes and his wife Nanette Newman were personal friends, so Edith agreed to allow Forbes to write her biography. This he did by coaxing her story out after many visits to her home during her later years. Ned's Girl was published in 1978, two years after her death.

After a standard education for that era, Edith's mother encouraged her daughter in her early career as a milliner. During the day, Edith went to work for a quality ladies hat maker on Buckingham Palace Road, at night she studied acting. Edith made her professional début as 'Beatrice' in William Poel's version of Shakespeare's Much Ado About Nothing at the King's Hall, London, on 10 December, 1912, although the Encyclopaedia Britannica has this as being 'Cressida' in Poel's version of Troilus and Cressida in the same year.

Whatever her beginnings, Edith was to become famous for her love of the classics, yet she also enjoyed a lot of the modern plays of that time. Her future performances went on to be very well received on the British stage and also on Broadway. Edith preferred to play interesting and difficult roles rather than starring in a production. Not being a great beauty, she needed to be noticed in some other way. Edith perfected her 'stage presence' with her famous withering look, her voice and her perfect timing.

At this time, the film industry was new and Edith was tempted. She made her first film The Welsh Singer in 1915, with another two or three others between then and 1916. Edith knew her main strength was her voice and silent movies could not do justice to her abilities, so she returned to the stage until the film industry had developed further. The Queen Of Spades saw her return to the screen in 1948.

In 1925, Edith joined the 'Old Vic' theatre company. It was also the year she married the love of her life, George (Guy) Booth. They had known each other since before the War, and became engaged just prior to him being called up for service. They decided against marrying earlier due to the uncertainties of those war years. Upon his return, Edith was working on both sides of the Atlantic, and Guy was quite happy to travel with her. When they returned to London, Edith and Guy agreed it was time for them to marry. They had ten happy years together, until his death from a brain tumour in 1935. Edith was later to regret not marrying him sooner. They never had children and when asked, Edith would reply:

Actresses would not perhaps make the most ideal parents.

Edith was drawn back to work, when she played the Nurse in John Gielgud's production of Romeo and Juliet. The entire production was well received, with Edith's 'Nurse' singled out by the critic W A Darlington:

... as earthy as a potato, as slow as a cart-horse and as cunning as a badger...

Then came her 'Lady Bracknell' in The Importance of Being Earnest, which was unleashed to the theatre-going public in 1939. Edith was to repeat this performance for the silver screen in 1952, although she didn't like the experience of being directed on set in Hollywood. 'Lady Bracknell's' formidable voice could be heard unleashed off the set when her displeasure reached its limits. Bryan Forbes said the character was her:

In 1954 Christopher Fry wrote the play The Dark Is Light Enough especially for Edith, in which she played the role of the 'Countess'. It is a tragi-comedy set against the backdrop of the Hungarian Revolution of 1848.

Edith went on to play strong characters in the films The Nun's Story with Audrey Hepburn and also John Osborne's Look Back In Anger.

A classic novel from Henry Fielding. Set in the 18th Century it tells the story of a foundling taken in by the local squire. Tom falls for the daughter of another squire and, with the help of her maiden aunt, Miss Western (Edith Evans), Tom sets out to make his fortune. Albert Finney and Susannah York star as the young couple. Edith received an Academy Award nomination for Best Actress.

Adapted from the play written by Enid Bagnold. Mrs St Maugham (Edith Evans) attempts to find a governess for her granddaughter (Hayley Mills), who manages to dispose of all contenders. Has she met her match with Miss Madrigal (Deborah Kerr)? Edith received another Academy Award nomination for Best Actress.

Taken from the novel by Robert Nicolson, Bryan Forbes wrote the screenplay and directed this powerful film. Mrs Ross (Edith Evans) is a frightened elderly lady living in dilapidated flat. Suffering from paranoid fantasies she thinks there are creatures listening to her from the dripping tap. She also believes herself to be a member of the aristocracy awaiting her inheritance. The Golden Bear Award for Best Actress was given to Edith at the Berlin Film Festival. She was also nominated by the Academy Awards for Best Actress.

Adapted from the 1879 play by Henrick Ibsen and directed by Patrick Garland. A housewife committed fraud to save the life of her husband. Many years later her secret is discovered, and she is being blackmailed. Clare Bloom stars as Nora, with Anthony Hopkins her authoritarian husband Tarvold. Edith plays Ann-Marie. The cast also includes Ralph Richardson, Denholm Elliott and Anna Massey.

Edith plays the Dowager Queen in this star-studded film of the classic fairytale of Cinderella. Gemma Craven, Richard Chamberlain, Kenneth More, Margaret Lockwood and Annette Crosby are just some of the stars in the film.

Adapted from the novella 'The Abbess of Crewe' by Muriel Spark. Directed by Michael Lindsay-Hogg. This comedy is set in a Philadelphia convent. As the elderly Abbess Hildegarde (Edith Evans) lies dying, Sister Alexandra (Glenda Jackson) is determined to become the next Abbess. That is before the arrival of Sister Felicity (Susan Penhaligon), who decides things should be changed. The battle to win the election begins!

DBE and Other Awards

Edith was honoured to be awarded Dame Commander of the British Empire in the King's Honours List in 1946. During the early 1950s she was also granted three honorary degrees from the universities of London, Oxford and Cambridge.

The name of Edith Evans must surely rank with the greatest of her sisters in the history of our theatre.

1Completed and released after her death in 1976.