Fairyland - the Internet Game Content from the guide to life, the universe and everything

Fairyland1 is an Internet-based game with 42 levels in which players from around the world plant virtual gardens to attract virtual wildlife for their fellow players to spot. 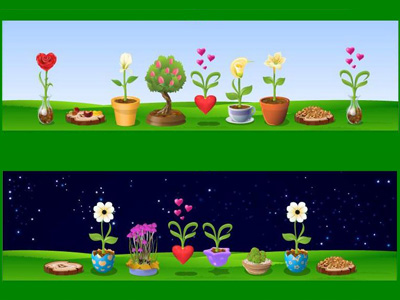 Fairyland is a simple game, with no flashy graphics or sound effects, but there is something in it for most, if not all, gamer types. As the game originated as a Facebook app, an account is needed, but it is free to play2.

The first thing a player needs to do is name their garden, then set it up by using virtual gold to purchase some plants and food for the wildlife they would like to attract. The garden simply consists of a rectangle into which two-dimensional images of plant pots and feeding tables can be placed in a row. The seeds that are selected for each pot develop over a few days into realistic portraits of plants and flowers such as herbs, roses or lilies. Several days later, they become 'Ready for Harvest' and the flower heads turn into items such as musical notes, lollipops or jewels. At that point, the plants can be harvested and new seeds can be planted in the pots.

Once the garden has been set up with plants and food, a link to the garden name appears in lists so other players can find it and water the plants (by choosing the option that appears when a plant is selected). If a creature is feeding in the garden at that time, an animated picture of the animal appears in the space underneath the garden.

A wide variety of wildlife can visit the gardens, from common garden creatures such as mice3 and small birds4, to more exotic animals like elephants or kangaroos, and even fantasy creatures including dragons and unicorns.

Different combinations of plants and food are required to attract each type of wildlife, such as Bird Mix to attract feathered friends, Tropical Fruits for creatures like gibbons and Veggies for animals such as badgers and lions5. Each player has a wildlife spotter's guide to tell them which combinations to use for each creature, and the animals are automatically ticked off in their guide after one is spotted in the player's garden and the player spots one in someone else's garden.

There are 42 Garden Levels, with different seeds being made available for purchase as you level up. For every plant that is successfully grown and harvested, a donation is made to Nature Conservancy's 'Adopt an Acre' Rainforest protection programme. The (non-virtual) donations are paid for from website advertising revenue and from players' purchase of virtual currency. Donations were first made in 2008, when $1,400 was raised between July and August of that year. In 2012, $14,300 was donated.

As well as the Garden Levels, there are also other levels and mini games to encourage people to keep playing. Each animal that is spotted gives the player some virtual diamonds, which count towards Wildlife Levels - each level that is completed introduces different creatures that can be attracted to the player's garden, to earn even more diamonds. Magic seeds of various kinds are occasionally dropped by the wildlife as well, and they grow into plants for attracting still more different creatures.

The mini games help players to earn more gold - there is Alchemy where the player adds ingredients to a cauldron to turn a rock into gold, a Hunt the Ladybird game, and also a Magical Mushrooms guessing game where the player selects three mushrooms from five to see what is underneath them and hopes to match a pair in order to win gold, diamonds or Alchemy ingredients. There are two mini games that can be added to players' gardens in exchange for some diamonds. Mini Mushrooms is also a guessing game, where garden visitors can choose just one mushroom from five and hope to find a diamond underneath it. Snail Racing offer visitors the chance to get more gold or other virtual prizes if they can guess which snail will win.

It is possible for the plants in a garden to die if they are not watered often enough, but it rarely happens in Fairyland6. Plants wilt before they die, and they are usually quickly sorted out because players can revive them with a diamond to get a bonus of gold (if the garden doesn't have a game and it is at least three hours since they last revived a plant) or a chance to win a prize (if there is a game in the garden). Nothing bad happens if a player can't play the game for a while, either - the garden is frozen after a week of inactivity (or can be frozen by the player if they know they won't be able to tend the garden for several days) and on their return, the garden is unfrozen to exactly how it was before.

Facebook Friends who also play the game can help players keep their gardens watered and send them gifts. However, there are options to buy your own gifts and to bookmark 'favourite' gardens and build up rapport with other players while looking after each other's plants. Therefore, unlike some other Facebook games, it doesn't affect gameplay too much if you have no Friends.

As a further encouragement to keep playing, everyone receives a Birthday Plant on the anniversary of creating their garden, which produces a balloon that turns into 100 gold pieces when it is harvested. Other plants also yield golden bonuses when they have finished growing, including the magic seeds and the plant that completes level 42.

Each player has a messageboard in their garden where visitors can leave a note to say hello or send thanks if they find some wildlife. This has led to a Fairyland jargon springing up - people write messages to send 'sprinkles' when they water a garden, and could be 'stalking' in order to find 'critters', or just 'swooping'7.

Many players also use ASCII Art in their messages, or send poetry or little stories to add variety to their garden visits. There are communities within the community, such as a 'Deb Club' for all players called Deb, LGBT friendly gardens, or groups associated with fansites like ALFF Love, Freedom Fairies United or Fairy Garden.

The original developer Mike Pope has garden number 1, and people can post feedback on the messageboard there, as well as watering his garden. There is a News section where the developers post information and also a Forum within Fairyland for players to ask questions or share their hints and tips with each other.

Starting life as a Facebook app in January 2008, initially Fairyland was just a social game allowing people to send virtual spells to their friends and play Alchemy and Magical Mushrooms to earn gold. Gardens were introduced in June 2008 and wildlife was added in March 2009. The gardens attained their design with green grass and blue sky (rather than their previous all-white background) in May 2009.

The game is being updated regularly, with new creatures and plants being added to keep existing players interested and to attract new players. In 2013, for example, to celebrate its fifth birthday, Fairytale toadstools and Fairytale characters were introduced along with a new virtual currency. There are also zodiac plants that are grown in the appropriate astrological months, plus special plants for Valentine's Day, Halloween and other key events during the year. As well as different plants to grow and pots to grow them in, many plants and pots create different background effects such as a night sky, or a desert landscape, so there are thousands of ways for people to design their gardens.

Simple and unflashy the game may be, but for many people around the world, with its mix of things to do and its friendly community of players, Fairyland the Internet game is a compelling bit of fun.

Image courtesy of the Fairyland Developers.
1Created by Play and Connect Ltd.2Although players have the option of paying for extra game currency to buy more virtual stuff if they so wish.3Who sit up in their animated pictures.4Who flap their wings in their animations.5All Fairyland creatures are vegetarian.6And even if it does, the plants can be resurrected with a sprinkling of Gold Dust (which costs six pieces of gold, compared to just one piece for watering a plant when it is alive).7Spotting a critter in a garden with their first sprinkle when other players have been stalking for some time.