From Ballets Russes to Ballet Noir: The Specter of the Rose on Stage and Screen Content from the guide to life, the universe and everything 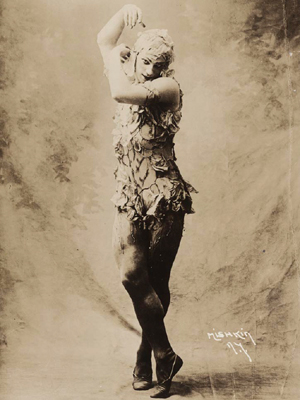 Ballet is for sissies and 'toffs', right?

Do you have any idea what it takes to be able to perform these wonders? Have you seen Baryshnikov doing eleven pirouettes in White Nights? In what way are these incredible leaps and physical manoeuvres, done over a lifetime in a way that sculpts the body more thoroughly than a weight regimen ever could, different from the sort of performance that sets millions cheering at the Olympic Games?

Why, that it's set to music, of course. And tells some sort of a story. We're suspicious of all those tutus. Real men don't do pliés.

Where do we get our 'twinkle-toes' idea of ballet from? And what would happen if somebody did a mashup between ballet and film noir?

Writer Ben Hecht seemed to be asking himself those questions in 1946. We're about to see what came out.

Back in 1909, a director by the name of Sergei Diaghilev organised Russian emigré dancers into a travelling troupe called the Ballets russes. Their number swelled after the October Revolution chased decadence out of the new Soviet Union. The Ballets russes dancers were influential: they spread Russian dance discipline and Russian aesthetic ideas throughout the West. For many people, Anna Pavlova and Vaslav Nijinsky embodied what ballet was supposed to look like. They could have done worse: the two dancers were superb practitioners of their craft.

Not that ballet wasn't a hard sell in some quarters. Even French audiences, long considered to be broad-minded and forward-thinking when it came to the arts, balked at some of Nijinsky's performances. There was scandal when the Faun in L'après-midi d'un faune got up close and personal with a lady's scarf. To music by Claude Debussy, no less. When Nijinsky and composer Igor Stravinsky went neo-pagan on them, they actually rioted. If ballet got this sort of reception in cosmopolitan Paris, how was it going to fare in Boston or New York?

Well, for one thing, there wasn't going to be any of that carrying-on in the Faun number.

You see, it was her first ball, and, like Eliza Doolittle, she could have danced all night. However, the flesh is weak, and our ballerina collapses gracefully into a fauteuil (that's an armchair, to you). Then the magic begins: the rose comes alive, in the form of a male ballet dancer in a rose costume – Nijinsky looked a bit like the Sprout in an old Jolly Green Giant advert, but more colourful. The Rose, it appears, quite likes being mobile, and demonstrates this at length, by cavorting about1. Finally, the Rose astounds the audience by leaping out of the window   – of the stage, of course, but remember this detail, as it will come in handy later. The debutante wakes up, and alas, it was all a champagne-fuelled dream. Happy audience, and no riots.

The music to Le Spectre de la Rose is jolly and innocuous, being an 1841 orchestration by Hector Berlioz of a piece called 'Invitation to the Dance', composed by Carl Maria von Weber in 1819. The choreography is by Michel Fokine, and the story is taken from a poem by Théophile Gautier which begins:

A study of various dancers taking on Fokine's choreography might make you notice one thing: pretty much every ballet cliché you grew up with, you philistine, is present. There is that leaping-up-and-slapping-the-feet-together manoeuvre. There's a lot of posing. The ballerina travels gracefully across the stage en pointe. And it's all about romance with inanimate objects. You may love this sort of thing, or hate it. But no matter how you parse this ten-minute excursion into the imaginary, it is unlikely to make you think of murder. Not even if, like Rainer Maria Rilke, roses make you think of gloomy topics:

So how did Ben Hecht get a film noir out of this?

The Specter of the Rose

Ben Hecht was a genius. Everybody said so: he was called 'the Shakespeare of Hollywood'. Hecht rescued more screenplays from oblivion and bad lines than a critic could shake a shtick at – he even rewrote Gone with the Wind for David O Selznick, on condition that Selznick pay him $20,000 and not tell anybody Hecht wrote it. Hecht was witty, intellectual, and scathing on the subject of Hollywood producers and directors, whom he considered a bit, let us say, aesthetically challenged. Hecht often wished he could direct his own film. He'd show them.

In 1946, he got the chance. Republic Pictures gave him a budget of $200,000 and the services of some good cameramen and a few first-class actors, such as Judith Anderson. Three weeks later, he had a film: The Specter of the Rose.

It had ballet in it. It had arch humour. It also had madness and the threat of murder. It was, in short, a bit weird, and predictably, this was not a box office success. But it's worth watching if you like ballet. Or film noir. Or if you're just curious. And it's the only known film appearance of Ivan Kirov.

Ivan Kirov was born Ivan Kashkevich in 1912, in Newark, New Jersey. Stricken with polio as a child, Ivan took up swimming to recover, and later became a dancer, performing on stage in Oklahoma!. As is clear from the film, Kirov had no formal acting training to speak of, and – as he came to the dance later in life than usual – less than an abundance of ballet credentials. Whatever he lacked in polish, he made up for in physical beauty, natural grace, and sheer verve. His performance as Sanine is startling, to say the least, but then, the very off-beat quality of his line readings lends credence to the idea that this ballet dancer is seriously distracted.

The plot of The Specter of the Rose is almost as simple as that of the ballet: two ageing ballet impresarii, played by Judith Anderson and Michael Chekhov4, set out to revive their flagging fortunes by staging a ballet tour with Sanine. Unfortunately, Sanine is suspected of having murdered his first wife, although the ballerina died onstage during a performance of Le Spectre de la Rose. To make things worse, Sanine has eloped with the next ballerina to play the part...

Sanine truly loves his second wife, but the ballet causes him to hallucinate. He and his wife take refuge in a fleabag hotel. When his exhausted spouse falls asleep, Sanine begins hearing the music again. Maddened by the image of the Rose's thorn as a deadly dagger, Sanine dances in a frenzy, dashing himself against the walls of the room. Finally, in desperation to avoid harming his wife, he leaps – you've guessed this by now –   out the window.

Sad, puzzling, but somehow satisfying, in an artistic sort of way. The audience stayed away in droves.

What Was He on About?

Where did Hecht get this idea about mad ballet dancers? From Vaslav Nijinsky, of course. Nijinsky was a genius, but he suffered from schizophrenia. He spent many years cut off from society, unable to communicate. No, of course he didn't try to kill anyone. Most schizophrenics are harmless people. But the connection between artistry and mental illness must have intrigued Ben Hecht.

Male ballet dancers are not all gay5. They are not all insufferable snobs6. They certainly are not all schizophrenic. And not all ballets involve animated roses, nutcrackers, or sugar plum fairies. Ballet, however, is an art form involving strenuous activity, set to music, that often explores liminal experience and speculation on the boundaries of human understanding. After all, if what the artist is saying could better be said in a comic book, why not draw a comic book?

Can ballet venture into film noir? Why not? Those toe shoes have boldly gone where no playwright had gone before. Why not there7? Unfortunately, we can only appreciate the Ballets russes from still photographs. Diaghilev, rather short-sightedly, it would seem, distrusted film as a medium. Recently, a rare piece of British Pathé footage was discovered, which gives us a brief glimpse. It is probably best to go youtubing again, to watch those who came after – Baryshnikov, Nureyev, and others – and to imagine what stirred up riots in Paris in the early 20th Century.

1The version linked to is a modern rehearsal. The reader may want to explore more traditional interpretations of Fokine's choreography by means of Youtube. Baryshnikov jumps the highest, while Nureyev probably looks most rose-like.2Translation of this passage from the poem 'Ghost of the Rose':

Open your closed eyelid
Which is gently brushed by a virginal dream!
I am the ghost of the rose
That you wore last night at the ball.

Rose, oh pure contradiction, desire,
to bring sleep to no one
among so many
lids.

Rilke can be excused: This poem is on his gravestone, because he died, allegedly, of blood poisoning contracted from a rose thorn.4Michael Chekhov was the nephew of playwright Anton Chekhov, and a student of Stanislavsky's. One commentator on the IMDb remarks that Chekhov's impresario 'outdoes even Clifton Webb in trying to break down the celluloid closet's door.'5We hope we do not need to add, 'Not that there's anything wrong with that.' Readers here know better. We are merely pointing out the fatuity of clichés, not playing booster for heteronormativity.6See Mikhail Baryshnikov enjoying good, proletarian vodka and pickled herring in White Nights.7The theme of psychological trouble and ballet is still a viable one for audiences, as evidenced from the 2010 film The Black Swan.