The Ray Harryhausen Sinbad Films Content from the guide to life, the universe and everything 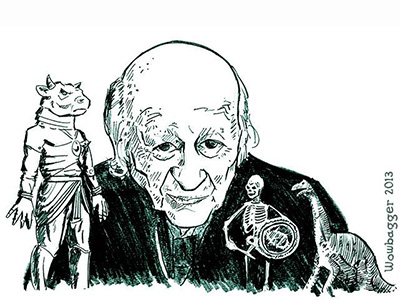 Ray Harryhausen's three Sinbad films are among the greatest and most fondly remembered adventure films of the 20th Century, and have heavily influenced many films that have come since. Although they were not the first Sinbad films to be made1, they are the pictures that have defined the character of Sinbad for many people.

Harryhausen was the stop-motion animator who created the creatures seen in the Sinbad films. Films are normally created and devised by a production company, or in some cases particularly powerful directors and screenwriters; Harryhausen was unusual in being a special effects expert able to create films around his own personal visions and self-imposed challenges.

As a child he was inspired by the films of Willis 'Obie' O'Brien, 1925's The Lost World and of course 1933's King Kong. He later worked with Willis O'Brien on Mighty Joe Young (1949). Another key influence was the Oscar-winning British Arabian Nights classic The Thief of Bagdad (1940), the film Disney's Aladdin desperately wanted to be. These influences, stop-motion animation and the magic of the Arabian Nights stories would perfectly combine in the fantastical adventures of Sinbad the Sailor, a man who could quest to explore the unknown. Each of the three Sinbad films would include a sorcerer character, inspired by The Thief of Bagdad's Jaffar2, and would feature lost lands inhabited by mythical creatures, as found in The Lost World and King Kong.

More than a mere model maker, though highly skilled at moulding life-like creatures, Harryhausen was the man who came up with the concept and outline for each of the three films, the screenplays subsequently being developed by professional writers. He decided what the storyline would be, and what creatures Sinbad would encounter, and dictated to the director how the scenes in which these creatures appeared must be filmed in order for the effect to work. The man whose absolute faith in Harryhausen made these films possible was his long-standing partner Charles Schneer.

Schneer was the head of independent production company Morningside Productions. As a producer, he was the one responsible for raising the necessary money to make the films, and he had the final say on which films would be made. Schneer had such extraordinary faith in Harryhausen that he allowed him to make the films he wanted. Schneer put his own professional reputation on the line within two years of first meeting Harryhausen, by making The 7th Voyage of Sinbad at a time when every major film studio believed that Sinbad films would fail at the box office3.

It is true that Schneer was occasionally forced to prevent Harryhausen from animating some sequences that time or budget wouldn't permit. It is also true that Schneer's ophidiophobia meant he would consistently refuse to allow Harryhausen to achieve his ambition to animate giant snakes4. However these minor points pale into insignificance when compared to the unprecedented amount of trust and freedom Schneer gave him, allowing him to bring his imagination and visions direct to the screen, unadulterated and pure. This was the reason why their professional relationship lasted from 1955 to 1981, and their friendship much longer.

Harryhausen's concept of a film about Sinbad began in 1952, after he had filmed The Beast from 20,000 Fathoms. He had always wanted to illustrate a living skeleton, and, realising it would look out of place in a contemporary setting, he needed a mythical setting to put it in. His fondness for the Arabian Nights tales provided this, and he wrote a two-page outline entitled Sinbad the Sailor, drew key drawings5 (the first of which was of Sinbad fighting a skeleton at the top of a spiral staircase) and had discussions with numerous producers including George Pal and Jesse Lasky Senior. They showed no interest, however. Harryhausen abandoned the project and instead agreed to work with producer Schneer on It Came From Beneath the Sea. Thus began a creative partnership that continued throughout his career.

After having successfully made three films together6, in 1956 Harryhausen persuaded Schneer to pursue his Sinbad film, despite the recent Son of Sinbad's failure at the box office. Schneer received backing from Columbia Pictures, and so The 7th Voyage of Sinbad, his first colour film, went into production. On its release in 1958 it was a completely unexpected success. The effects lessons learned during its making led to Harryhausen making The Three Worlds of Gulliver. This was followed by Mysterious Island, after which he considered making a second Sinbad film.

One of the Sinbad films' greatest appeals is the way so many impossible creatures are brought to life – all the work of one man. Harryhausen always emphatically insisted that the beings that appear in his film are creatures, never monsters. He defined monsters as being evil, malevolent and horrifying, such as Dracula. His creations are usually large animals who come into conflict with humans when Sinbad and his crew trespass into lost worlds; occasionally they are beings under the spell of sorcerers, with the evil and corruption belonging to the evil sorcerer, not the creature concerned.

Unlike today, where special effects films are made costing millions, the Sinbad films were made on the smallest possible budget, as it was the only way that Morningside Productions could get the films made at all. The effects were all the work of Harryhausen, who spent months, sometimes over a year, working alone morning to night in his studio. Because of the very tight budget when making the films, Morningside Productions could not afford to hire well-known established actors but relied on new talent and relative unknowns. Nor could they afford lavish sets or scenery, and instead filmed what nature had provided in beautiful locations seldom seen in Hollywood. Scripts were basic and the shooting of the film on location was done quickly, within weeks, all to keep the costs as low as possible.

By rights, under these circumstances, these films should not have made much impact on their original release. That they did, transcended their humble origins, stood the test of time and continue to inspire audiences throughout the world is a testament to the hard work, heart and care that went into each and every frame of film.

Sinbad in the Age of Muses

This was the title given on the first notes Harryhausen made in 1960 for the project that would become Jason and the Argonauts. In this earliest concept, Sinbad would be one of the characters to accompany Jason on board the Argo in search of the Golden Fleece. Sinbad was written out of the film, as were the griffin and Medusa, both mentioned in these first notes.

Sinbad and the Valley of Dinosaurs

After making the very successful One Million Years BC, starring Raquel Welch, in 1966 Harryhausen briefly considered making a Sinbad film featuring dinosaurs, probably set in Mexico. The idea met with little interest, however, and instead he made The Valley of Gwangi, about a valley in Mexico populated with dinosaurs, based on a story his mentor Willis 'Obie' O'Brien had proposed in 1941 but had failed to get filmed.

In early 1977, the year Star Wars was released, Schneer began work preparing a script for a fourth Sinbad film, in which Sinbad would be transported to Mars from the Great Pyramid of Giza. The idea behind the film was that Egyptian civilisation was based on that of Mars7, where Egyptian deities such as Anubis and Horus lived in pyramids among the canals of Mars. There were plans for creatures such as a three-armed genie, a man-eating tentacled plant, a Roc, an aquatic canal creature and most prominently a sphinx to appear, as well as obelisk-shaped spacecraft. It may even have tied in with the pyramid seen in Hyperboria in Sinbad and the Eye of the Tiger.

Sadly, no film companies were interested, and it was abandoned in favour of Clash of the Titans.

Sinbad and the Seven Wonders of the World

As this would require filming in Egypt, Greece, Turkey and South America (standing in for Babylon), the costs involved were quite high, so the idea was shelved.

Many of the images involved in the Seven Wonders had inspired Harryhausen previously:

The Ray Harryhausen Sinbad Films | 'The 7th Voyage of Sinbad' - The Film
'The Golden Voyage of Sinbad' - The Film | 'Sinbad and the Eye of the Tiger' - The Film
1In 1947 Richard Wallace's Sinbad the Sailor appeared starring Douglas Fairbanks Jnr, and in 1955 came Son of Sinbad, directed by Ted Tetzlaff and starring Vincent Price as Omar Khayyám and Dale Robertson as Sinbad's descendant of the same name.2Jaffar in The Thief of Bagdad was played by Conrad Veidt.3RKO Pictures' Son of Sinbad was a flop in 1955.4Harryhausen was able to slightly circumvent this by animating snakewoman Sadi, and later Medusa.5Sadly many of these no longer exist.6It Came From Beneath the Sea, Earth Vs. The Flying Saucers and 20 Million Miles to Earth.7Links between pyramids and alien civilisations have, of course, been the subject of many science fiction and fantasy tales. These include the original Battlestar Galactica, Aliens vs Predator and Indiana Jones and the Kingdom of the Crystal Skull, but perhaps the film and television series Stargate has covered the theme best.8This would be guarded by skeletal horses.9Such as the gardens of Hyperboria at the North Pole.