Potato and Beetroot Salad Content from the guide to life, the universe and everything 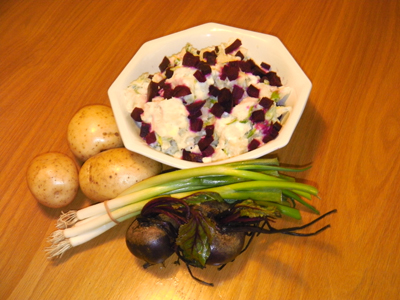 Researcher Deke shares a family favourite with us:

This is a recipe given to me by a family friend at a barbecue party, a long time ago. She said then that it had been a favourite of her family for as long as she could remember. It became a favourite of our family and it is the dish most often requested to be brought along to a buffet as our contribution at friends' or family get-togethers. In fact it has turned into something of a family joke to find the potato and beetroot salad.

But it is popular, perhaps only because it is colourful or perhaps because it is tasty, but there isn't usually much left at the end of the day. It is inexpensive as it uses only a few basic ingredients and requires minimal preparation and cooking time. It serves as either an accompanying dish to cold meats and leafy salads, or as a stand-alone lunch-box snack. This recipe will serve at least six individual portions, and will keep for a few days if refrigerated.

Peel the potatoes and bring to the boil in a pan of lightly salted water. Reduce heat and simmer until they are just cooked. Using a separate pan, wash the beetroot and put in whole, including stalks, into lightly salted water. Bring to the boil and reduce heat to simmer until cooked. The point of a sharp knife should easily slide into the centre of the potato or beetroot when ready. As soon as potatoes and beetroot are cooked, remove from the heat and drain off the water. Allow to cool sufficiently to handle, then peel the beetroot's outer skin, remove stalks and any root. Keep them separate from the potatoes.

Dice the potatoes and beetroot while still warm into similar-sized pieces, keeping them in separate bowls. Top and tail the spring onions and peel off any damaged outer leaves, but keep as much of the green leaf part as possible. Chop the onions finely across the stalk and leaves into ringlets.

Add the mayonnaise and onion to the potatoes and season as required. It is preferable to use white pepper as this will not show in the mix. Gently stir until the potatoes are evenly covered by the mayonnaise. Place a layer of the potato-onion mixture in a serving bowl, then sprinkle a layer of the beetroot over that. Continue adding alternate layers until all the ingredients are in place, but... DO NOT STIR.

Place in a refrigerator to chill before serving.

It is said that any potato salad is best prepared warm and served cold. I can't disagree with that. The potatoes should be only just cooked or very slightly undercooked when the heat is turned off. Pick a brand of potato suitable for boiling that won't collapse to mush when cooked.

It is important for this dishes' appearance that the potatoes, onion and mayonnaise are mixed first without the beetroot, and once the beetroot has been added as little mixing as possible is done. To do so will result in an overall pink blancmange-like appearance, instead of the attractive red, white and green of the individual ingredients. If you still feel the need to mix the ingredients simply use a serving spoon from the bottom of the mix to fold it once. But... DO NOT STIR.

The above quantities make a 'party-size' bowl of the salad. The quantities of the principal ingredients can be halved or reduced proportionally if a lesser amount is all that is required, but it is suggested that if halving the amount, the result is better if the quantity of mayonnaise is maintained at three tablespoons.

You could also produce your own mayonnaise but that is something of a chore. Using a quality brand of ready-made, full-fat mayonnaise is much easier.