Coventry Cathedral, Coventry, UK Content from the guide to life, the universe and everything 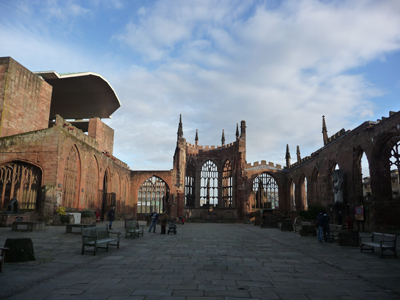 With its spire dominating the city, Coventry Cathedral is a church turned cathedral turned symbol of peace and reconciliation between nations.

The building is nestled in the city centre among the modern structures of Coventry University and the Herbert Museum and Art Gallery to the front and other medieval buildings, including Holy Trinity Church, to the rear.

The cathedral is actually two buildings. The original structure was badly damaged by German bombing during World War Two and is no longer used for religious purposes, though it still stands and remains consecrated ground. The damaged building has been left as a monument and a modern building constructed alongside for use in services.

To the west of the modern cathedral are the remains of a much older building, the original Priory Cathedral of St Mary, which dates back to the 11th Century. This is mainly now just foundations and low walls. These are displayed at the Priory Gardens and Visitor Centre, on Priory Row.

A church has stood in the area of the cathedral since the days of King Henry I. In 1102 the seat of the Diocese of Lichfield, of which Coventry was a part, was moved to the city. As a result the Priory Church of St Mary became a Cathedral and was the first Cathedral in the city. This structure had been built by Leofric, the Earl of Mercia, and his wife, the famous Lady Godiva. It was founded in 1043. Not much is known about this early cathedral, but we do know that it was a massive building, longer than the current modern cathedral.

During the Middle Ages Coventry became a prosperous town and the Church of St Michael was enlarged over time. This was partially funded by a local family, the Botoners, who were successful merchants. The church was rebuilt from 1373 and the tower finished in 1394. Its spire, the third highest in England, was added in 1433.

There were also 14th- and 15th-Century chantries, which can still be seen in the side of the remains of the building. These were small private chapels, in this case paid for and maintained by the local guilds. The guilds which had a chantry in the church included the Dyers and the Mercers. Their members paid for a chantry priest whose role was to say masses for the soul of deceased guild members, to ensure their smooth passage into Heaven. However, the guild chantries were dissolved in 1548.

In the Dissolution of the Monasteries in 1539, the seat of the Diocese of Lichfield was returned to Lichfield itself. The Priory of St Mary, now no longer a cathedral, was abandoned. The building began to decay. It seems likely that the stone of the church was removed to be used for other building projects. Excavations in modern times have revealed the original foundations, but very little of the walls. Gradually, the city of Coventry grew on top of the site of the original cathedral, and it was forgotten.

In 1918 it was decided to make Coventry a diocese in its own right, rather than merely part of the Diocese of Lichfield. As a result, the parish church of St Michael was elevated to become a cathedral, the second Coventry Cathedral, although it is now known as the 'Old Cathedral'. The original Priory Cathedral of St Mary was long gone by this time.

As a centre of British manufacturing, Coventry was the target of a number of bombing raids during World War Two. This became known as 'Coventration'. During the course of the war there were 41 raids, which killed over 1,000 people in the city. The worst of these was 14 November, 1940, which alone killed at least 554 people. Large parts of the city were damaged by firebombs in this attack.

This included the Cathedral. A modern visitor will note that the building has not been repaired but has been left standing as a monument to the bombing and the folly of war. The glass was blown out from the windows1, leaving the stone frames intact, and the roof collapsed. The tower and spire were left undamaged. Today, the building is open to the elements, which is very pleasant on a nice day but less so in the wind and rain.

Following the destruction, it was decided to leave what remained of the original structure standing and to construct a new cathedral (Coventry's third cathedral). This new building, designed by Basil Spence, took six years to build and was completed in 1962. It is connected to the old cathedral by a covered area open to the sides. The new cathedral was constructed in a contemporary style, which nevertheless blends quite well with the original structure.

Under the leadership of Provost Richard Howard, a public commitment was made, via a national radio broadcast on Christmas Day 1940, that after the war the Cathedral would work with their wartime enemies towards reconciliation. He said he wanted to work with them 'to build a kinder, more Christ-child-like world'.

This commitment has continued ever since. After the bombing, several medieval nails were found which were then welded together to form a cross. After the war, similar crosses were sent to the German cities of Kiel, Berlin and Dresden which themselves had been badly damaged in Allied bombing raids. This began the Cross of Nails Society.

After the war, Coventry twinned with Dresden, which suffered even more severely from bombing than Coventry. In 2005, the Bishop of Coventry preached a sermon at the reconsecration of Dresden Cathedral.

The theme is continued throughout the buildings. 'Reconciliation', by Josefina de Vasconcellos, a statue depicting two former enemies hugging each other, stands in the old cathedral. It was donated in 1995 by Sir Richard Branson to mark the 50th anniversary of World War Two. An identical statue was donated to the Peace Gardens at Hiroshima on behalf of the people of Coventry. The sanctuary also has a theme of reconciliation. In this area is a large wooden cross made from two roof timbers which were found after the bombing to have made the shape of the cross where they landed. Next to this is an altar inscribed 'Father Forgive', another symbol of the Cathedral's commitment to peace and reconciliation.

In the new building is a bell given to HM Queen Elizabeth the Queen Mother by the President of Germany to mark the 50th anniversary of the bombing. The bell is inscribed in English and German: 'Peace - Friede'.

Benjamin Britten's War Requiem, about the futility and violence of war, was commissioned to mark the opening of the new Cathedral. It had its first performance there on 30 May, 1962.

The Coventry Litany of Reconciliation is still given in the old cathedral at noon every Friday.

Visitors can attend a service in the new building, or can pay an admission fee to have a look around. There is a coffee shop for those who are peckish and a gift shop if there's money burning a hole in your pocket. Guided tours are also available.

The new cathedral has several interesting features. For example, one large window is inscribed with images of angels and saints. There is a maple leaf inlay on the floor to mark the funding of the organ by Canada. The baptismal font is a boulder from a hillside near Bethlehem, a gift in 1960 from the government of Jordan. The top of the boulder is hollowed out into a bowl in the shape of a scallop shell, the traditional symbol of pilgrimage. The font is overlooked by a large coloured glass window representing the rising of the sun and 'truth breaking through darkness and confusion', according to its designer, John Piper. The high altar cross includes the original cross of nails, made after the bombing. Behind this is an enormous tapestry showing various religious scenes including the Crucifixion. This took twelve people three years to complete! Around the cathedral are several small chapels, including one intended for prayers for prisoners of conscience2. The new cathedral is oriented north to south rather than the more usual east to west which means if conditions are right, the inside is bathed in light.

All visitors are able to look around the old building for free and this is recommended. There are benches to sit and take in the view. The large clock tower at the rear of the structure houses a small tourist information centre and for a small fee, you can climb to the top of the tower. On a clear day this provides excellent views over the city and surrounding area, but for safety reasons it is not open when it is windy.

1One window which survived the bombing was shipped to Iceland and can now be seen in the Church of Akureyri.2People who are imprisoned for 'offences' such as their political views, rather than a crime as such.