Bagging the Wainwrights: Appreciating England's Mountains Content from the guide to life, the universe and everything 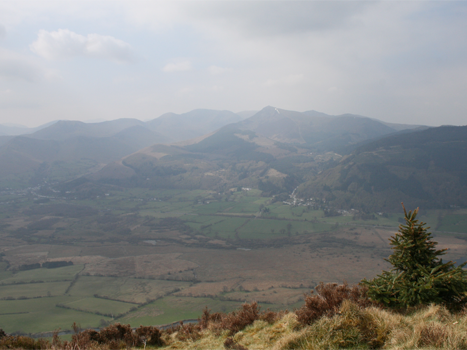 In the 1950s and 1960s, Alfred Wainwright spent his free time walking the fells of his beloved Lakeland, and his nights painstakingly hand writing and illustrating his pictorial guides to those fells. These seven volumes have become the definitive guide to the mountains of England's Lake District1.

To climb all the Wainwrights is no small undertaking, but with a little organisation and application is more than achievable for all but the most timid and unfit.

Ironically, perhaps, Wainwright himself could not lay claim to having fully bagged all the Wainwrights. He had little head for precipitous heights, and so never gained the very summit of Helm Crag, which requires some use of hands as well as feet and overlooks a significant drop to the valley below. While it does demand some nerve, it is by no means a rock climb, and on a still, dry day should be doable by anyone.

There is a certain type of personality that is attracted to the challenge of bagging summits. It would be easy to fully love and appreciate the Lakeland hills, and spend one's life walking among them, and yet never climb or perhaps even see some of the fells in Wainwright's guides. The bagger, however, despite the apparent sterility of their quest, cannot help but reach a deeper appreciation of the geography of the area by virtue of having visited every significant part of its skyline at some point.

All the Wainwrights are located in the Lake District, an area of northwest England about 30 miles (48 km) wide and 40 miles (64 km) long containing all the largest natural lakes and highest mountains in the country. It's easily accessible from the M6 motorway, the best points of access being junctions 36 (if you're heading in from the south) or 40 (if you're approaching from the north).

All but one are over 1,000 ft (304.8m) in altitude at their summit and are therefore technically mountains rather than hills. None, however, reach 1,000m (3,280 ft) high, which makes them all achievable. Not all have clearly defined (or easily located...) summits, being in some cases rather flat plateaus. Others, like Angle Tarn Pikes and Mellbreak, have two or more closely-located summits of almost identical height. Hence the Norse-originated word 'fell' is used as a convenient word to encompass them all2.

To be classed as a Wainwright, all that's required is that a fell has a chapter to itself in one of the seven Pictorial Guides to the Lakeland Fells. It's an entirely subjective definition - there is no requirement of height, prominence, location or anything else. There are, and forever shall be, exactly 214 Wainwright Fells. No amount of more precise surveying can add to or detract from their number.

There are some strange selections among Wainwright's fells - fells whose presence in the guides seems unusual or downright perverse, and omissions that seem inexplicable.

The Nab was a controversial inclusion given that when the guides were written it was, strictly speaking, private. It's not any more, although during deer stalking season it's apparently best to check with the Dalemain Estate in Pooley Bridge to see if walking is allowed there.

Armboth Fell is a boggy plateau and it's unclear which specific point Wainwright considered the summit. The best advice to baggers is to visit everything that looks like it could be the top.

Mungrisdale Common is a baffling inclusion, being as it is a practically flat field with just a few stones marking its 'summit', which is nothing more than an arbitrary point where some vague footpaths meet.

Meanwhile, when one is making the walk from Blake Fell to Burnbank Fell, one's eye is drawn irresistibly east to the peak of Carling Knott overlooking Loweswater. Despite its prominence, and despite its being of higher altitude than the summit of Burnbank Fell, you'll search in vain for it in Wainwright's guides, so the bagger in a hurry will miss it out.

Castle Crag in Borrowdale rises less than 1,000 ft (304.8m) above sea level at its summit, so it can't even call itself a mountain. Despite this, it's a rugged, strenuous walk to the top, and definitely worth it for the view over Borrowdale and for the war memorial on top.

Could I Climb a Wainwright?

Yes. It's a simple question, and the answer is equally simple. If you wish to conquer just one Wainwright, it's perfectly possible to do so, almost regardless of what physical challenges you may face. Overlooking Keswick and Derwent Water, Latrigg's summit can be approached from Keswick in just a few minutes by car to within less than a kilometre, and the gentle sloping path from the car park to the top, climbing only 60 metres or so, is perfectly feasible with a pram or even potentially a wheelchair. While Latrigg is one of the easiest, several others such as Binsey, Great Mell Fell, Hallin Fell and Loughrigg Fell pose little difficulty to anyone who can get round the shops.

Could I Climb ALL the Wainwrights?

Probably. All the tops are accessible on a day's circular walk - none require rock-climbing or mountaineering skills (unless you attempt them in snow or ice and/or by unconventional routes). Some will require a good deal of fitness and determination, however, and one should never underestimate the seriousness of going into the mountains.

The largest challenge for the prospective bagger, though, is one of organisation and planning. Wainwright ordered his guides alphabetically rather than geographically, so planning requires some time with a map if one is to link fells together into a selection of logical day-long circular walks or point-to-point expeditions. As you might expect, this task has already been done, and additional guidebooks are available that list routes and details for you if you lack the skill, will or time to do it yourself.

A common question is 'How long will it take?'. The answer is dependent entirely on one's commitment, fitness and organisation. If you walk only on weekends, only in the summer, and only when it's sunny, it could take years. If you're prepared to set aside work or any other commitments, walk in any weather and go out every day without a break, you could potentially do all 214 in a month without ever breaking into a trot. There exists the reasonable question of why you would try to do such a thing so quickly, however, since a large part of the pleasure of the experience is looking around and taking in the surroundings.

The weather in the Lake District is notoriously changeable, and although distances and altitudes are less than those you might encounter when trying to bag Munros, navigational challenges should not be underestimated. In particular, while there can be little doubt you're in the right place when you're on the top of Skiddaw (clue: there's a trig point) some of the 'summits' you may be aiming for are minor prominences on otherwise relatively featureless high mountain plateaus. Unless you're very good with a map and compass, in poor visibility GPS may be the only way of verifying that you're heading towards the 'top' of Thunacar Knott or Ullscarf.

It's perfectly possible to race round all the Wainwrights in a month or less, ticking them off a list before moving on to the next. This is very much against the spirit of the books, however. The Pictorial Guides are nothing if not an extended love letter to a landscape, a landscape it would do a disservice to ignore as you race through it. Wainwright's selected fells should not be looked upon as a task to be completed, but rather as a body of knowledge to absorbed. Without his guidance, there would surely be far fewer people who took the pleasure of the views from Caw Fell, fewer who came to know the isolation of Selside Pike, and fewer, perhaps, who would venture off the path on their way off Green Gable to visit the promontory of Base Brown. By all means tick off the fells you'll inevitably return to, the crowd pleasers like Skiddaw, Helvellyn and the Langdale Pikes. But use the rest as an excuse to visit the parts of the district most never see. Importantly, if you're going to bag them all, choose carefully which you'll do last, and with whom. It's an important moment, and deserves to be special.

Finally, before you begin or after you finish, no Wainwright bagger should omit a pilgrimage to Orrest Head, a ten-minute amble from the railway station in Windermere, and the place from which Wainwright caught his first glimpse of his beloved fells.

1Other English mountains are available, eg the Pennines.2The word 'fell' actually properly refers to the side of a hill, rather than the summit, but in Lakeland is generally understood to mean the hill/mountain in general.3Fell running is the ludicrously tough sport of running where most people struggle to walk, up and over the fells of Lakeland. The archetypal fell run in the Lakes is the 'Bob Graham Round', a roughly 65-mile (105km) route incorporating almost 27,000 feet (8,230m) of ascent over 42(!) fell tops which one is expected to complete within 24 hours. The record stands at less than 14 hours... and has stood for more than 30 years.