Disability Content from the guide to life, the universe and everything 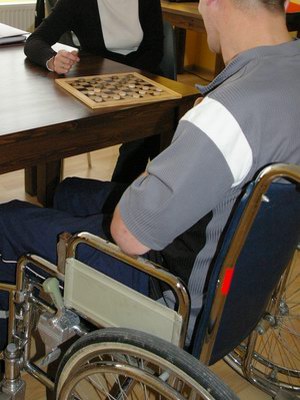 Not so long ago, anyone with a disability was shunned as a product of evil, displayed in a freak show, or locked away in a mental asylum. Humans like to belong to a group, whether it be family, social circle, workplace, or mutual interest group. Anyone who does not fit in may be rejected - perhaps because of a fear of the unknown or a lack of understanding.

What is a Disability?

The following definitions were drawn up by the World Health Organisation in a document called the International Classification of Impairments, Disabilities and Handicaps (ICIDH) 19801.

Disability:   Any restriction or inability (resulting from an impairment) to perform an activity in the manner or within the range considered normal for a human being.

This rather depends on what a society considers to be normal – what the average man, woman or child would expect to be able to do within the society in question. Expectations in a modern Western society will not be the same as in a traditional desert or rainforest tribe. The question of what is 'normal' is the sort of thing that courts will spend days arguing over. The effect of a disability may also be indirect: for example if you receive inadequate education as a result of a school having two storeys and no lift, then you will struggle to get a job in the future. There are other definitions and classifications found among people with disabilities themselves, in the medical and legal professions and in the world of competition such as the Special Olympics and the Paralympic Games.

Impairment:   Any loss or abnormality of a psychological, physiological or anatomical structure or function.

This definition includes permanent and temporary conditions, whether they are present at birth2, developed in early life, or were acquired later in life, such as paralysis after an accident. Impairments may not always be immediately obvious to others and a person may have more than one impairment. There are also psychological impairments, which are probably the hardest to measure and assess.

The loss of a leg leads not just to the impairment of only having one leg, but also to the disability of an inability to walk. In many situations the social context will, to a degree, determine whether the label of disability is appropriate or not. For example, in a deaf community, where signing is the norm, a hearing, non-signing person will be disadvantaged and 'disabled' because they cannot communicate. In an academic environment, a mathematically gifted person on the autistic spectrum may function successfully, but struggle in general society3.

Effect of Society on Disability

The more sophisticated a society, the more impact it has on anyone with a disability. Society creates problems as well as having the resources to alleviate them. There is also the matter of how a society cares for those less able to care for themselves.

Aristotle has often been quoted as saying you can judge a nation by the way it treats its most vulnerable citizens. US Senator Hubert Humphrey, in his last speech on 1 November, 1977, remarked:

This standard remains true, although the terminology wouldn't be considered acceptable today. It also encompasses caring for all people, disabled or not, according to their need.

It's important to remember that help does not always mean doing things for others; what's often more important is for someone to be independent. On an individual basis, you should offer help when you think it's needed but do not be surprised if it's declined. Also, allow the person accepting help to explain exactly what help they need.

Someone who is disfigured or has obvious physical abnormalities is more likely to be stared at or shunned in a society that values and strives for a certain ideal appearance. Sadly, humans do seem to have a perception that they are not perfect, but should strive for this state. This is fuelled by the media who promote individuals to a higher, manufactured state of ‘perfection’, called celebrity. This leads to a demand for plastic surgery, extreme dieting and so on. The very desire for perfection can itself be a psychological problem.

It's important for society that people co-operate, but it's also important that everyone is valued for whatever contribution they can make, not rejected as useless if they can't achieve the same things as the majority of other people.

There may be physical, social and financial barriers preventing someone with a disability being able to access all the essentials and luxuries in life as easily as other people. Recent years have seen some progress towards improving the situation. Changes to the legal framework and consultation with user groups and disability experts have led to improvements including integration in mainstream teaching, wheelchair access to buildings and easily visible signage. The complexity of modern society, compared with simple living in a small locality, means that there are an immense variety of problems faced by people with disabilities. Although necessary help may be available, for many people this is only possible after a battle of form-filling, intrusive assessments and challenging authorities.

People with a disability are as diverse as any group of people. They have their own personalities and abilities, individual joys and sadness, aspirations and fears, achievements and disappointments, disputes and reconciliations.

Society tries to impose certain values on its members, which can cause particular problems around medical ethics where individual choice4 is important. For instance, medical advances mean that parents with a genetic disorder in some cases can now select an unaffected embryo, but some parents may wish to have a child with the same disability as themselves.

There can be issues around medical treatment - the right to refuse treatment as well as the question of access to treatments that may be expensive or innovative and not available under National Health schemes. Many heated debates take place about euthanasia, which is currently illegal in many countries, including the UK. Debates around this highly controversial topic include the right to choose euthanasia as well as the need for protection for those who may feel pressured to choose euthanasia.

The human race has come a long way in terms of knowledge and technology, but in some respects, little has changed in terms of our basic functioning and interaction. All human beings have more in common than any or all of their differences – if this is ever universally recognised and acted upon, the human race might have a more peaceful and productive future.

1The UK has a similar definition under the Equality Act and the Disability Discrimination Act.2This is known as a congenital impairment.3Do remember that not all people who have a disorder on the autistic spectrum are gifted.4Or autonomy.