Fish Spas Content from the guide to life, the universe and everything 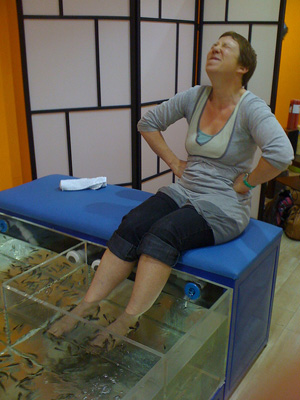 Springing up in shopping malls these days is a new type of spa treatment, known as fish spas or fish pedicures.

Am I Herring Correctly?

The premise is that you put your bare feet into a receptacle containing a small shoal of fish, which nibble or suck off the dead skin, and leave feet feeling smooth and refreshed. Satisfied customers claim that it imparts a sense of well-being, similar to that following a massage, as well as leaving the feet in improved condition.

The practice itself is not new: the Kangal Spa in Turkey has been using this treatment since the 1900s, and many spas in Asian tourist resorts have taken this on board. The fish used, garra rufa, are known as doctor fish. Similar treatments have been used in Turkey and other Middle Eastern countries. But it is only in the early 21st Century that this has become more widely known. It is claimed that sufferers of psoriasis or eczema can gain much relief from their condition, though no scientific verification has been carried out.

A typical experience goes as follows. The client obtains an appointment time from the receptionist – often these are walk-in places, and the client can be taken straight away. The receptionist checks that the client has no contra-indicators, such as recently applied nail varnish, or open sores or verrucae, and a short medical form is completed. The client removes their socks and shoes, and rinses their feet. Sometimes this is down to the individual client to carry out; in other establishments, a member of staff checks the feet and ensures they are sterilised. Crocs are usually provided, to allow the client to move to the treatment tanks, where they sit on a bench and gingerly lower their bare feet into the tank full of fish.

Some clients find the sensation of being nibbled by fish quite relaxing; others have described it as torture by tickling. After the allotted time (usually 10–15 minutes), the client can at last remove their feet, dry them off and replace their outdoor footwear. The staff change the water in the tank that has just been used. Cost is typically around £10 for 10 minutes. Since the checking procedures vary from establishment to establishment, new users are advised to check that they meet with their own standards before proceeding with the treatment.

Aside from the possible discomfort, a number of concerns have been raised about safety, in particular whether disease or infection may be passed from one customer to another. While some of the water is changed in each tank between clients, it is nigh on impossible to completely change it. Warnings have been issued by the UK Health Protection Agency, and fish spas have been banned in several US states. However, no instances of infection transfer have been recorded.

Concern has also been expressed by animal welfare groups as to the unnatural living conditions for the fish.