Mozzarella Cheese Content from the guide to life, the universe and everything 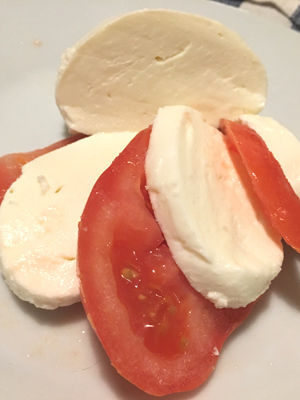 I could go on stage and make a pizza and they'd still come to see me.
- Singer, Frank Sinatra extolling the attractions of mozzarella in the UK's Independent On Sunday newspaper, 31 May, 1992

With its rubber-like characteristics, mozzarella di bufala is the quintessentially Italian, stringy-when-molten ivory-white cheese which makes it impossible to eat pizza with any ounce of decorum. Uncooked, the real stuff is mild and milky and somewhat salty, resulting in a taste not unlike a juicy 'white' butter.

Q: What's the difference between a buffalo and a bison?
A: You can't wash your hands in a buffalo1.

Authentic mozzarella is made from buffalo milk, primarily in the Italian provinces of Caserta and Salerno, and also in the neighbouring communes in the provinces of Benevento, Naples, Latina, Frosinone and Rome, which together constitute the single geographical area in which mozzarella is produced.

The history of the Mediterranean buffalo is vague, although it is thought to have originated in Eastern India. They may have been introduced by any of the series of invaders from the Greeks to the Normans. Alternatively, the breed may be aboriginal, having been there since the quaternary period. It is fairly certain, however, that the Romans made some use of the buffalo as a draught animal in the ploughing of watery terrains, because of its strength and the size of its hooves (which don't sink into moist soils). It is a fact that the buffalo found sanctuary in swampy Campania, the countryside beyond Naples, and perhaps that is why the tradition of buffalo-rearing in this region has been maintained.

'Industrial' cow's milk mozzarella, however, may still be manufactured and sold by all and sundry. This comparatively bland (sometimes yellow) imitation lacks the brilliant blue-white porcelain finish of genuine mozzarella. Due to commercial pressure for a longer shelf-life, it is compromised in terms of moisture content and (by definition) freshness. It will also never be able to compete, in terms of body and texture, due to the inherent differences between cow's milk and buffalo milk. Nevertheless, cow-milk mozzarella should not be considered an inferior product - just a different one.

Buffalo milk, obtained from a single early-morning milking, is heated to 35°C (95°F). Rennet2 is then added and the concoction is allowed to 'rest' for around an hour, after which the whey is drained off. The curd is then broken up into small pieces, immersed in boiling water (according to legend, mozzarella first came into being after some cheese curds fell into a bucket of hot water) and spun until long ropes of cheese form, which the blessed cheesemaker then kneads until he obtains a smooth shiny paste. Herein lies the skill... waiting too long will result in the production of a mushy cheese, while a tough dry cheese will result from stringing too early. After kneading, the lump is broken up and moulded into balls (ovoline or bocconcini), rolls, loaves or plaits (trecce), which are stored in cold brine so that they maintain their shape while cooling. Indeed, the name mozzarella is a derivative of the Italian noun mozza, a cut, and the verb mozzare, to cut off (you can learn more Italian here).

And thus the cheese is ready, just eight hours after extracting the milk from the buffalo's udder.

Genuine, fresh, mozzarella, prepared by evening is ready for consumption the next morning, oozing with freshness and flavour is ideal set upon a hunk of fresh bread. At room temperature it should yield pearls of milky whey (like a lactating nipple) upon slicing, and should squeak when in contact with tooth enamel after which it should melt in the mouth. Mozzarella's life span is only 3-4 days, if that.

Despite its obvious attractions as a standalone savoury, mozzarella is often added to a meal to provide texture, for example...

1A 'joke' demonstrating, by use of Estuary English, that William Cody should have called himself Bison Bill!2Vegetarians beware - rennet is an animal product.