The Execution of Thomas Harrison Content from the guide to life, the universe and everything 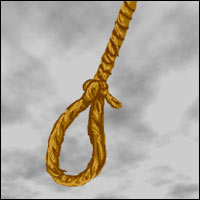 General Thomas Harrison had played an incriminating role in the execution of King Charles I. After fighting at several major encounters in the English Civil War, he was entrusted with the military escort that brought the king from Hurst Castle to stand trial in London. At the trial, Harrison was a regular participant and a signatory of the king's death warrant.

When Charles II negotiated his return to the throne in the months around 1660, it was made clear that a general reprieve would be issued to all those who had opposed his father. To not offer such a pledge was a political impossibility: Charles's return would have been vehemently resisted had he not clearly stated that the positions and lives of former rebels were secure. In the Declaration of Breda, outlining the conditions in which Charles II would return to the throne (written on 4 April, 1660), it was confirmed that:

...we do grant a free and general pardon... to all our subjects, of what degree or quality so ever, who, within forty days after the publishing hereof, shall lay hold upon this our grace and favour, and shall, by any public act, declare their doing so, and that they return to the loyalty and obedience of good subjects; excepting only such persons as shall hereafter be excepted by Parliament...

However, not quite everyone was guaranteed security from reprisals. As the Declaration made clear, anyone who shall hereafter be excepted by Parliament could be prosecuted for their previously treasonable crimes. On 29 August, 1660, the Indemnity and Oblivion Act was passed by the Convention Parliament, fulfilling Breda's promise of clemency. A small number of exceptions were made, however, to the general pardon. These exceptions comprised the group of men called the 'Regicides' - those who had directly brought about the execution of Charles I. Thomas Harrison was one of these men.

Harrison made little attempt to escape arrest - perhaps in the expectation of a pardon - and was admired for his stoicism in the face of violent death. At his trial, his religious faith and belief in the ideals of the English Revolution remained a source of strength in the face of his inevitable execution. Remaining unrepentant and refusing to submit to the authority of England's new monarch, Charles II, he was easily convicted.

On Saturday 13 October, 1660, Thomas Harrison was dragged on a hurdle through the streets of London from Newgate Prison to Charing Cross and executed. In his diary, Samuel Pepys wrote:

I went out to Charing Cross, to see Major-general Harrison hanged, drawn, and quartered; which was done there, he looking as cheerful as any man could do in that condition. He was presently cut down, and his head and heart shown to the people, at which there was great shouts of joy... Thus it was my chance to see the King beheaded at White Hall, and to see the first blood shed in revenge for the blood of the King at Charing Cross.

Harrison's 'cheerful' manner was admired by many attending his execution, including Pepys. A contemporary publication1 notes that 'All the way as he went he endeavoured to discover to the world the undauntedness of his spirit' although his true feelings may have been shown by 'the more than ordinary trembling and shaking of his joynts'. Upset by the scoffing noises made by the audience at this apparent weakness, Harrison interrupted his speech from the scaffold to explain that it was his old war wounds caused him to shake, not fear.

After the speech, Thomas Harrison was hung by the neck for a short time, but cut down before serious unconsciousness or death occurred. While some executions by hanging, drawing and quartering were made more merciful by allowing the prisoner to die at it its first stage, by all accounts, Harrison remained conscious and lucid throughout his horrific ordeal. After being briefly deprived of oxygen, he was cut down and allowed to breathe. Next, his abdomen was sliced open and entrails thrown onto a brazier - evidence suggests that Harrison remained in full consciousness at this point. Finally, his head was removed and body divided into quarters - all pieces were displayed at prominent sites around London.

1W.S., A compleat collection of the lives, speeches, private passages, letters and prayers of those persons lately executed (1661).