AIDS HIV - Global Epidemiologic Statistics Content from the guide to life, the universe and everything 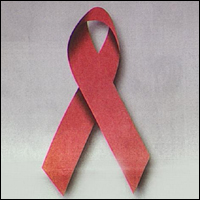 The acquired immunodeficiency syndrome (AIDS) is a serious disease caused by the human immunodeficiency virus (HIV). As there is no cure and no vaccine for the disease, the only way to confront it is to prevent it from spreading. The following sections will provide epidemiological information to show how the disease spread in the last few years. It is important to note that there are people that refuse to acknowledge that HIV/AIDS is a pandemic, and that precautions (such as the so-called 'safe-sex') should be taken. Normally their argument is that HIV/AIDS is restricted to the high-risk-groups. While it is a fact that the incidence of HIV in low-risk groups is significantly lower, one should be reminded that this attitude leads to an exponential growth of HIV-infections. And the problem of the exponential growth is that it rises slowly in the beginning and boosts when it's already too late. Accurate information is therefore the most valuable weapon we currently have to confront AIDS.

Even with the aid of mass communication the number of HIV infected people is still growing regardless of the socio-economic status of the countries. Between 1997 and 2001 the global growth stopped rising exponentially, and levelled off to a more or less linear infection rate of 5.3 million new cases per year. This is of little comfort if one notes that the growth is only receding where it has already done most harm, ie, among high-risk groups or in Africa, but that the virus has found niches where it can spread more than exponentially, as for instance among the not-so-well informed low-risk groups, or in countries that have been spared from the epidemic until the late 1980s.

Epidemiologic statistics compared with the AIDS epidemic updates at the UNAIDS and more data at the WHO - World Health Organization.

According to UNAIDS (the joint United Nations programme on HIV/AIDS), AIDS has become the most devastating disease humankind has ever faced. From 1980 to 2000, more than 60 million people have been infected with the virus and 20 million have died. AIDS is currently the leading cause of death in sub-Saharan Africa. On a global level, AIDS is the fourth biggest killer.

The current situation is far from comforting, particularly in developing countries, where the majority of new infections occurred in young adults (one-third of those currently living with HIV-AIDS are aged 15-24). To make things worse, most of them do not know they carry the virus. Many millions more know nothing or too little about HIV to protect themselves against it.

A very special problem in the developing world - especially in sub-Saharan Africa - is the demographic impact of the disease. In some countries the average life expectancy dropped to below 40 years instead of the projected 60. By 2000, 12.1 million children in sub-Saharan Africa lost at least one parent to AIDS (the forecast for the next decade is sinister, the number will double in less than 10 years). Adding to that, skilled professionals are leaving these areas, which leads to a further deterioration of life quality.

In retrospect, there have been isolated AIDS cases dating back to 1957, and positive serum tests (for HIV anti-bodies) from conserved samples from 1959. The oldest HIV-positive (not just the anti-bodies) blood sample dates from 1963. There were a few other cases in the 1960s where, in retrospect, the diagnosis would have clearly been AIDS. Apart from those few cases, however, the epidemic began only in the late 1970s.

The HIV most probably evolved from SIV (the simian-analogon of HIV). Studies point that this happened somewhere in the south of Uganda, Africa, in the west of Victoria lake. There, it probably remained dormant until the 1950s when that area started to become settled. The contraction of the HIV (eg, by coming into contact with the monkey's blood) did not take long from this point in time. Two major factors then contributed to the worldwide spread:

On 5 June, 1981, the Center for Disease Control (CDC), in Atlanta, USA, reported about a series of five pneumonia-cases caused by Pneumocystis Carnii (PC-pneumonia, or PCP is one of the typical opportunistic infections related to AIDS). At the same time, on the eastern coast of the USA four cases of an otherwise rare form of cancer, the Kaposi sarcoma (KS), started to alarm some physicians. On 3 July, 22 more cases of KS were reported. Meanwhile some of the PCP patients were found to have KS as well. The connection between all those cases, namely that all patients were young homosexual men, and that the common cause for the disease was a severe immunodeficiency, led to the first definition of a new disease, GRID - gay related immunodeficiency5. In the autumn of 1982 this term evolved to AIDS, and almost 1000 cases were reported.