Lolcats - Words, Pictures, Theology Content from the guide to life, the universe and everything 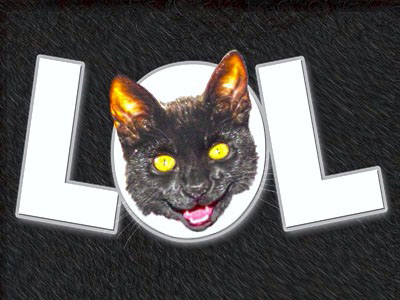 Large numbers of people, all doing the same thing at the same time, can produce repeatable social phenomena (and possibly alarm the authorities). Adding electronics to the mix can make events even more startling. The LED lights have seen queer sights, but the queerest of all may be the mushroom growth of interest in humorous cat photos, and the emergence of a new language to describe the doings, thoughts, and even theology of the irresistible moggies.

We are talking, of course, about Lolcats. Those who have not yet visited the 'I Can Has Cheezburger' site have yet to succumb to Lolcatmania. This, then, is an introduction to the madness.

A 'cat macro' is defined as a picture of a cat, usually doing something silly, with a badly misspelled and ungrammatical caption intended to incite hilarity. Cat macros on the internet follow the template of the popular 1970s motivational poster of a kitten clinging to a tree branch with the caption, 'Hang in There, Baby' – a poster which has been widely parodied by the less optimistic.

The first cat macro probably appeared inscribed in hieroglyphics on the walls of an Egyptian temple, depicting the cat goddess Bastet. In the absence of further research into this no doubt seminal field of inquiry, it would have to be said that the earliest documented cat macros stem from the year 1905, when photographer Harry Whittier Frees brought out a series of posed photos of cute kitties in period clothing with appropriate subtitles. From there, it was but a step, a mere click of the numinously-named mouse, to the advent of the iconic cheezburger-seeking kitty who spawned the website which attracts up to 1.5 million clicks per day.

It must be noted that the turn-of-the-century felines lacked one essential ingredient of Lolcatdom: they did not speak Lolcat. While these staid Victorian cuties were adorable, they expressed themselves in grammatical English. Grammatical English and refined teatime behaviour are anathema to Lolcats.

The 'Lol' in Lolcats: Meow If You Hates Goggies1

The Lolcat phenomenon is based on the idea of the meme2. WordNet defines a meme as 'a cultural unit (an idea or value or pattern of behavior) that is passed from one person to another by non-genetic means (as by imitation).' Both as an online exercise and computer-generated fusion language, Lolcat depends on a number of such non-genetically transferred cultural units. In other words, Lolcat is not hereditary. It is catching.

The first meme involved in Lolcattery is inherent in the name. A Lolcat is a LOL-cat, a cat that causes one to LOL, or Laugh Out Loud. The terminology invokes the meme of textspeak, a form of communication used on the internet and other electronic media, where time is of the essence, keystrokes sometimes cost money, and typists are too lazy to spell everything out.

Lolcats write the way humans think they would talk, if cats talked. The fact that cats do talk, possessing their own well-developed language3, is irrelevant to the creation of Lolcat macros. Humans design these things, humans post these things, vote on them, and fill email inboxes with them, and until Felis catus evolves itself a set of opposable thumbs, a change in this situation seems unlikely. The world will be stuck with such witty requests as 'I can has cheezburger?' and 'It is can be talk liek lolcat day nao plees?', and be forced to worry that 'I'm in ur kitchun eatin' ur salami'.

All Your Memes Are Belong to Us

In addition to textspeak (or 'txtspk'), the language of Lolcats draws upon other Internet memes of the 'you had to have been there' variety. Conspicuous among them are phrases arising from notable happenings4 such as the Zero Wing Incident. Zero Wing, a Japanese-made computer game, was so badly translated that its opening sequence, depicting an Earth invasion by incomprehensible aliens with a broken Universal Translator, spawned the legendary assertion that All your base are belong to us. No matter how many computer people complained that the joke lost a bit in the 10,000th telling, the saying continued to pop up on T-shirts, lunch boxes, chatlines, and cat macros. For Lolcats, 'All your X (socks, paperclips, cheezburgers) are belong to us', is an effective meme.

When Lolcats do not like something, they say so loudly. (They are cats, after all, for whom a delayed dinner hour is a crisis of apocalyptic proportions.) Lolcats express displeasure with the now-deathless meme 'Do not want'. A silly hat on an innocent kitty? Do not want. A large, snarling dog? Do not want. A day without cat macros? One gets the idea.

As a meme, 'Do not want' is the product of intellectual property theft. The employee who leaked a copy of Star Wars: Revenge of the Sith had a lot to answer for, not least because the back-translated (from Chinese) subtitles caused Lord Vader to exclaim, not 'Noooo!', but 'Do not want'. The rest is internet history – and an integral part of Lolcatspeak.

'In teh beginnin Ceiling Cat maded teh skiez An da Urfs, but he did not eated dem6.'

In teh...er, the beginning, there was Ceiling Cat, who became the Lolcat deity. Of course, if there was a Ceiling Cat, some would argue, there must be a Basement Cat, and that cat would be black. Then came Ceiling Cat's Kitteh, or Happy Cat, the son of Ceiling Cat. The Holy Trinity was completed with Hovercat. Now Lolcat speakers were ready to tackle the ultimate challenge – the translation of the Bible into Lolcat.

The Lolcat Bible – almost completely 'translated' at the time of writing – is the product of volunteer labour and individual initiative. As such, the quality varies from book to book, from chapter to chapter. According to the posted guidelines, the philosophy of these neo-Wycliffites was 'As fun as possible, no more misleading than necessary'. Translators were to remember that cats liked to have fun, had short attention spans, and had probably never seen a tent but were familiar with sofas. The resulting website outlines an often-amusing biblical epic whose theology aims to help kittehs find the way to forevuh-life in a heavun filled with cheezburgers.

A journal as august as Christianity Today took a dim view of the Lolcat Bible, at least on its blog page for Christian feminists. According to the Christianity Today blogger, such frivolity as 'translating' the Bible (done by laymen) into imaginary languages such as Lolcat and Klingon detracted from the serious work of the Wycliffe Bible Translators, who are still a few languages shy of their goal of global Bible literacy. The blogger apparently overlooked the fact that in order to translate the Bible, one must first read the Bible. It is possible that the Lolcat edition has contributed not only to laughter, but to the rediscovery of an ancient text.

I Can Has More Lolcatz?

As long as there are humans with digital cameras, computers, and willing pets, there will be Lolcats, and, as long as weary office workers need cheering up, these cat macros will turn up in everyone's email. If you need a quick Lolcat fix, there is the original site, 'I Can Has Cheezburger'. Another popular site is lolcats.com. There are archives for those who need to catch up on five years of frenzied cat photography.

Want to create your own Lolcats? The process is absurdly easy. You can use your computer's Paint program to edit your own winning moggy pics, and then add a sans serif caption – Impact is the font of choice. Those lacking cat access need not be deprived of the opportunity to display wit and creativity. Simply log on to the Builder portion of the Cheezburger site, follow the short directions, and your masterpiece of adorable cuteness will be ready to share with the other addicts.

The Lolcat Bible Translation Project can be visited, read, complained about, and wiki-interfered-with.

Can't speak Lolcat? Try the Lolcat translation engine. In 2008, disgusted Germans at Der Spiegel predicted there would be such an engine. They were right.

1For the non-speaker of Lolcat, a 'goggie' is a member of the species Canis familiaris.2The term 'meme' was introduced by Richard Dawkins in his 1976 book The Selfish Gene.3Cats do not, perhaps, possess a set of memes, as chattering at birds and insects (also known as 'making anti-aircraft noises') appears to be genetic rather than mimetic.4Notable to geeks, fanboys, and gamers, that is.5A 'wiki', from the online encyclopedia Wikipedia, is a user-generated content site using Wikipedia's open-source software.6Lolcat Bible, Genesis 1:1. Note: The spelling of the definite article as 'teh' is another common internet meme, now legitimised theologically.7Srsly=Seriously, Amen, or Selah.