Parkin - the Cake Content from the guide to life, the universe and everything 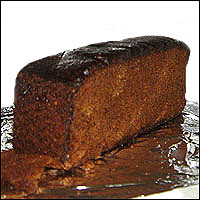 Parkin is a rather filling ginger cake made with oatmeal and treacle. It is traditionally eaten on Bonfire Night. Parkin is most commonly associated with the Northern English counties of Yorkshire and Lancashire, although it has traditionally also been eaten in many other parts of the UK. Of course today, supermarkets right across the country regularly stock this delicious seasonal cake.

Yorkshire parkin is normally baked in a rectangular tin and cut into squares. It is this type of parkin that is known throughout Britain. In some parts of Yorkshire, parkin has become so popular that 5 November is referred to as Parkin Day.

Because parkin was once made with little fat and no eggs, its texture depended on its high treacle content. The treacle hardened during cooking so the parkin would have to be left for a few days for the treacle to soften, before it could be eaten.

It is thought that parkin dates back to well before before 1605 and the Gunpowder Plot. In fact, it has been dated to Viking times. The Vikings celebrated the Feast of Thor (their god of thunder) with bonfires and something which was called a 'Thar cake'. This, like the early parkin, was baked on a stone heated by the fire.

Another type of parkin called Thar or Tharf cake is made in South Yorksire, Lancashire and Derbyshire. Parkin is often referred to as treacle parkin.

In York in 1860, schoolboys were often served parkin with their tea and it is still available in York today.

In Derbyshire there used to be a tradition called Tharf cake 'joining'. Throughout the year, neighbours would all contribute money towards the ingredients for making the cakes that were eaten in November. The joining itself was held at a different home each year so that everyone took a turn in hosting the feast. It was sometimes customary to keep a bit of the cake from one year to the next.

There were also similar joinings in South Yorkshire, where the thar cake would be divided between members of the family.

How To Make Parkin

Rub the ingredients well together, and then mix with the teacupful of milk and as much Scotch treacle as will make it lightly stiff. Bake in a seven-inch greased tin in a slow oven (180°C, 350°F, Gas Mark 4).