The Great Tambora Volcanic Eruption Content from the guide to life, the universe and everything 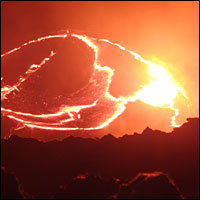 Every thousand years or so, a volcano erupts somewhere on the planet with enough power to significantly alter the global climate for years afterwards. Prodigious quantities of dust and sulphur aerosols are ejected into the atmosphere, preventing the Sun's rays from reaching the ground. Universal crop failures occur, temperatures drop dramatically, and living creatures across the globe die off in large numbers. Such an event occurred in 1815, on the island of Sumbawa in Indonesia - the explosion of the great Tambora volcano.

Tambora is just one of many volcanoes in the archipelago of Indonesia. It lies just east of the popular tourist destinations of Bali and Lombok, and once it was a mammoth peak - over 4,000 metres high. It is believed that Tambora had been silent for 5,000 years before the explosion occurred1. Then, in 1812, Tambora awoke from its slumber, when small eruptions of steam and ash began to emanate from the mountain, accompanied by significant earth tremors. This activity continued until 5 April, 1815, when the first great eruption occurred, generating a volcanic column 25km high. This blast was heard over 1000 kilometres away. The worst, however, was yet to come.

Five days later, on 10 April, a number of colossal explosions occurred, creating columns of volcanic material that stretched up to 40km into the sky. What goes up normally comes down, so when these columns collapsed, they formed pyroclastic flows - earth-hugging clouds of hot ash, rocks and pumice, that rampaged across the island killing everyone and everything in their path2. Almost the entire population of the Tambora province, over 10,000 people, were killed instantly by these flows. In addition, when these flows reached the sea, tsunamis up to 5m high were formed, that careered into neighbouring islands across the locality, killing yet more people in the immediate vicinity of the volcano.

The lighter ashes and dusts stayed somewhat longer in the skies, turning day into night for days across an area hundreds of kilometres from the blast. When this ash fell back to earth, it blanketed the ground so perfectly that all vegetation was killed off, subsequently killing as many as 80,000 people from famine and disease across many islands in the region. All in all, over 90,000 people died as a direct result of the eruption3 - the largest death toll from a volcano in recorded history.

The Year without a Summer

The longer term effects of Tambora were felt across the globe. In addition to the large quantities of ash, rocks and dust ejected by the volcano, over 200 million tonnes of sulphur dioxide gas were propelled into the stratosphere. This had the effect of limiting the amount of sunlight that reached the ground, so that temperatures, particularly across the Northern Hemisphere, began to fall dramatically4. Monsoon season was interrupted in India, possibly leading to a deadly outbreak of cholera that insinuated its way across the globe. Europe experienced widespread crop failures just as it was recovering from the effects of the Napoleonic Wars. Ireland had its first great famine. Devastating floods hit China. In North America, 1816 is remembered as 'the year without a summer', when snow fell during June and frost was still widespread during the month of July.

It is believed that the Tambora eruption occurred when ocean water, penetrating cracks and fissures, reacted with magma deep inside in the volcano, causing a massive build up of pressure to occur. Eventually the pressure became too much to bear and the mountain literally blew itself apart. Over 50 cubic kilometres of magma were ejected in the ensuing blasts, significantly more than any volcanic explosion since then.

Arising indirectly from the explosion of Tambora came one of the best known works of horror fiction in modern times. It happened that the poets, Lord Byron and Percy Bysshe Shelley were living by Lake Geneva in 1816. As a result of the bad weather, they spent much time that summer with their friends and family entertaining indoors. During one such meeting, Byron proposed that each member present attempt to write a ghost story. Shelley's wife, Mary, came up with a novel that is still remembered - Frankenstein. In this way, the legacy of Tambora persists to the present day.

1Tambora itself is believed to be around 50,000 years old.2Pyroclastic flows are, by far, the deadliest effect of volcanoes. They travel at enormous speeds, are filled with vast quantities of superheated rocks and ash, and will displace all air, suffocating a person in seconds. Not a nice way to go.3Some estimates put the death toll at 117,000.4The large quantities of sulphur aerosols in the atmosphere were responsible for incredibly beautiful sunsets across the globe. J.M. Turner rendered some of these sunsets onto canvas in the autumn of 1815