Daphne Sheldrick's Elephant Orphanage, Nairobi, Kenya Content from the guide to life, the universe and everything 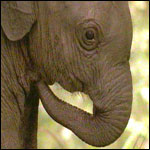 Daphne Sheldrick's Elephant Orphanage is located in the Nairobi Game Park, Kenya. It was originally started by David Sheldrick, and the work was taken over by his wife after his death. The park itself is too small to sustain any adult elephants, but they take in orphaned baby elephants from all over Kenya. Unfortunately, due to the rise in ivory poaching, most of the elephants are there because their mothers have been killed by hunters, but some have just got separated from their mothers for some reason. The elephants are raised with the intention of gradually re-integrating them into the wild.

You can visit between 11am and 12 noon every day, and see the elephants being fed and playing. In addition, there is a keeper there who will give a talk about the elephants, where they came from, how they are getting on, and how some of the previous orphans are progressing. Usually there are no more than 25 to 30 people there, so you can get really close to the elephants. They also take in rhinos as well, so if you are lucky you will get the chance to see a young rhino.

Top tip: if you go in an organised tour, the tour operator will probably charge you around $50 (£33) a head, of which only a very small percentage goes to the Elephant Orphanage2. However, if you make your own way there the entrance is by donation, so not only is it cheaper for you, but hopefully you will be able to give a lot more than $3.

It's a must if you ever have a few hours to spare in Nairobi, and is quite close to the Giraffe Centre, so you can easily visit both in the same day. If you are in Kenya for a few days and get the chance to go out on safari near Mount Kenya, you might want to see Morani, a black rhino.

If you want more information, you can visit the Sheldrick Wildlife Trust website.

1Shade is normally provided for a baby elephant by its mother, but in her absence a blanket has to suffice.2 Recently the donation to the Elephant Orphanage has been $3 (£2) a head.