Morani - a Kenyan Black Rhino Content from the guide to life, the universe and everything 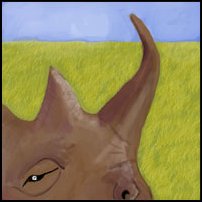 In the environs of Mount Kenya, there is a game reserve and safari lodge called Sweetwaters. This lodge is in itself a marvel - the accommodation is centred around 20 or so luxury tents with single camp beds and flushing toilets. The lodge is not fenced in but is protected by an underground electric pad which protects the guests and keeps animals out, but doesn't cause the fauna undue harm.

However, the real treat about visiting Sweetwaters is that it offers a once in a lifetime experience. If you speak to the owners of the lodge, they can arrange for you to meet Morani, a tame black rhinoceros1. The lodge owners will arrange for you to jump into a jeep and take the five minute drive to see him at a cost of about £5.

Morani is Swahili for 'Little Warrior' and is a fitting name for this truly handsome and proud animal. Morani was orphaned when he was very young and rumours abound as to what happened to his mother; some say she was poached but in fact she was killed by Masai warriors. Under Kenyan law, the only people who are allowed to kill rhinos of any species are the Masai and they are only allowed to kill a rhino if it is attacking cattle which are sacred to them. A cow is literally the lifeblood of the Masai and Morani's mother had killed several belonging to the same tribe. After having killed his mother, the Masai delivered Morani to the authorities.

Morani was introduced to a game reserve which had its own family of rhinos and it was hoped that he would integrate smoothly into the existing rhino population. Unfortunately, the most common cause of death among black rhinos, poaching aside, is attack from fellow rhinos. Morani was attacked several times and the decision was made to move him to his current location.

Morani lives in his own enclosure, near Sweetwaters, with other indigenous animals. He has a 24-hour armed guard who protects him from poachers. The best person to ask questions regarding Morani is the guard - he spends many hours a day in the company of the rhino and can answer any questions you may have on his habits, history and behaviour.

When you get closer to Morani you will see that he is covered in lesions caused by flies. The lesions look like huge weeping ulcers and are often bleeding slightly. Do not be distressed, this condition is endemic to the black rhino population of the region and causes the rhino no pain whatsoever.

I went to see Morani in December 1999 while making a holiday programme. It had just rained and the heat had started to rise rapidly. We were treading through the scrub when we were approached by a very tall soldier wielding a very impressive firearm. Having recognised our guide he led us to a patch of grass where, sprawled on the scrub was Morani - a two and a half metre giant - fast asleep.

Having talked to the guide about Morani, I went up to him and stroked him. It seemed a bit odd but the guard assured me that he loves human company. At this point, Morani heaved himself to his feet and inspected his new visitors. He had a child's inquisitiveness, and took great interest in the director and her camera and moved among us before rolling down and resuming his nap.

Morani is a splendid animal, still a cub, and deserves all the attention and protection the Kenyan government can provide. It just seems such a pity that he isn't free to roam in his own little enclosure for fear of being poached.

1The difference between a black and a white rhinoceros has nothing to do with colour and everything to do with the shape of their lips. A white rhino's lips have a more distinct shape with defined corners (the 'white' comes from anglicising of the Dutch word meaning wide) whereas a black rhino's upper lip is hooked and sometimes slightly curved.