Ho Chi Minh - the City and the Statesman Content from the guide to life, the universe and everything 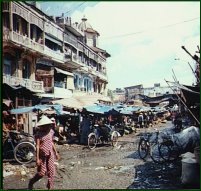 A quick glance around the web may serve to convince the casual Researcher that Ho Chi Minh is a place at least as much as a person. In fact, in the just-warming-up stages of the 21st Century, Ho Chi Minh (the city) is vast, sprawling and mostly made of bricks, whereas Ho Chi Minh (the person) would seem to have relatively limited significance, having been dead for almost four decades.

On what basis, then, is Ho Chi Minh (the person) still able to offer any sort of competition, at least in terms of search engine popularity, to a sprawling concrete jungle, the slightest part of which could easily reduce an ordinary human being to mere insignificance... even if he or she did happen to have the same name?

Ho Chi Minh is a bustling city of seven million or so people on a steaming plain in Vietnam. Hanoi, to the north, may be the seat of national government and where the decisions are made, but Ho Chi Minh City is definitely where the action is. It is a city of startling contrasts and constant motion, where frenzied commerce and suicidal traffic counterpoint exotic parks, wide boulevards and the architecture of Vietnam's languid French colonial past.

The city may be old, colourful and rich with history and myth, but its name is still quite new. Dubbed the 'Pearl of the Orient'1 by Europeans who felt that the French had done a remarkable job of transforming the city into a comfortably exotic oasis where the natives were safe and suitably grateful to have been turned into waiters and maids. Ho Chi Minh City used to be called Saigon.

Saigon had, in fact, been around for at least 200 years before a joint French and Spanish punitive expedition2 at the end of the 19th Century began the process which established its new and unsolicited role as the heart of French Indo-China. People had lived in the region for a lot longer than that in a well-established settlement in the heart of the Mekhong River delta, long before the Mongol rulers of China (or the competing uncles, aunties and cousins of European royalty) took an interest in steamy Southeast Asia.

Sooner or later, nearly all guests outstay their welcome; and so it was with the French in Vietnam. World War II had shown the Vietnamese people that the Europeans (who thought a lot of themselves and put on airs in the boulevard cafés) were rather less self-assured and condescending in the presence of large numbers of Japanese soldiers. In fact, they proved to be rather fawning and conciliatory; though, much to the chagrin of the Vietnamese, the Japanese soldiers were quite content to let the French continue to run things on their behalf.

When World War II came to an inglorious end in the pacific, astonishingly, life returned to a more or less European-style normality in Saigon. French colonial administrators continued to order cocktails in the sweltering Saigon evenings and Vietnamese waiters continued to serve them, albeit with a growing sense of dissatisfaction.

Eventually, this state of affairs proved to be altogether too much for the people of Saigon who, after a decade of increasingly bloody confrontations, finally persuaded the French that, after all, the real fun was to be found in Africa. Unfortunately, all this merely resulted in the less-than-satisfactory division of the country into two separate political entities in 1954; the imposition of increasingly corrupt and despotic puppet rulers in the newly constituted South Vietnam and, finally, following another long and bloody war3, the Communist Vietnamese in the North.

The French were finally defeated at Dienbienphu, despite America's best efforts to make sure that the contest was stacked heavily in favour of the old colonials. Vietnam was partitioned pending a referendum on reunification in 1956, which was not allowed to take place, of course, because the new colonial stake-holders in the South were in the throes of anti-Communist hysteria at home (where there was also a booming domestic market for cheap Vietnamese rubber).

As Vietnam's war with America dragged on, Saigon gradually became home away from home for more and more American servicemen and the city increasingly took on the appearance of a decadent and decaying capital under siege. This state of affairs finally came to an end in 1975 with the unconditional surrender of South Vietnam and the ignominious evacuation by helicopter of the last Americans from the rooftop of their Saigon embassy.

In celebration of their victory and in recognition that 30 years of bloodshed could have been avoided if the western world had looked more favourably on the aspirations of Ho Chi Minh (the person) and the provisional government he had formed in 1945, the victorious Vietnamese from the North promptly changed the name of Saigon to Ho Chi Minh City.

All men are created equal. They are endowed by their Creator with certain inalienable Rights. Among these are life, liberty, and the pursuit of happiness.

It may be a surprise for some to learn that Ho Chi Minh, considered by them to be an icon of perfidious rebellion and a lackey of international Communism, could bring himself to utter such a profound homage to America. They might be even more surprised to learn that Ho had actually lived in America for a short time and worked for American military intelligence during World War II, spying on the Japanese army in Vietnam. For, although Ho was a Communist, he was first and foremost a Vietnamese nationalist, whose dream was to see his homeland free and prosperous. One of the greatest of the many tragic ironies of the 20th Century is that Ho, America's Communist enemy, could just as easily have been Ho, America's Vietnamese friend, and the bloodshed and devastation that marked three decades of war need never have happened.

Ho Chi Minh left Vietnam at the age of 21, working his passage aboard a French liner. He travelled a lot, living for a time in England4, America, France, Russia and China, and visiting other places, such as Thailand and Hong Kong.

World War I had the same effect on Ho that it had on many young men: It made him sick of the way things were and desperate to find an alternative to the madness that had destroyed the best and brightest of a generation5. Now living in France, Ho became a Communist and founding member of the French Communist Party.

Ho moved on to Moscow and then to China where, from 1925 to 1927, he taught the gospel of Marx according to Lenin. Gradually moving back towards his homeland, Ho founded an East Asian revolutionary movement in Indo-China, which uniquely blended the flavours of European Socialist doctrine with a dash of classical Asian Confucianism. Returning to Vietnam just in time for the arrival of World War II, Ho founded the Vietnamese independence movement, the Viet Minh, which harassed the Japanese in a guerilla war and generally supported the efforts of the Allies.

At the end of the war in 1945, Ho Chi Minh declared Vietnamese independence. At the insistence of Western powers he grudgingly agreed to work alongside the French colonial administration which, even at this late stage, had not yet lost its taste for cocktails and sultry Saigon sunsets. A new relationship with the same old colonial masters was bound to fail though...and it did. Sadly, the same countries which had fought to drive the Japanese colonial adventurers back to Japan now joined forces to maintain the European love affair with exotic living and cheap rubber. The people with the most money to lend the French at this time were, of course, the Americans.

Nguyen That Thanh left Vietnam to wander the world as a young man. Along the way he learned a lot about the way the world works and he learned to write.

Ho Chi Min died on 2 September, 1969, at the age of 79. Contrary to his wish to have his ashes buried in urns on three hilltops after his death, his body was embalmed and displayed in a granite mausoleum in a Communist fashion first used following the death of Lenin.

'Not only is cremation good from the point of view of hygiene, but it also saves farmland', he had said.

Was Uncle Ho a hero? Let history be the judge.

1The epithets 'Pearl of the ___' or 'Paris of the ___' have been used to describe various parts of the world where Europeans have made themselves the comfortable, if unwelcome, guests of people who lacked the means to (or were too polite to) make them go away.2The deaths of Christian missionaries provided the excuse.3This time involving the Americans, who had financed and supported the French, and who maintained until the bitter end that they were 'defending' the southern Vietnamese against the Communist Vietnamese.4Ho Chi Minh's life in London.5This was in the old days, before the people who run things caught on that wars are much better when only the poor and disenfranchised are killing each other, and the 'best and brightest' are safe at home.