The Broadmoor Siren Content from the guide to life, the universe and everything 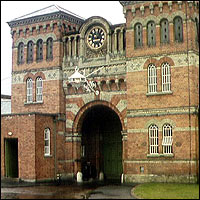 Every Monday morning at ten o'clock the deafening sound of an air-raid siren disturbs the peace over a large area of the leafy commuter belt that is Berkshire, UK. The signal sounds the familiar alternating high-low note, followed by a constant all-clear note five minutes later.

It's not a re-enactment of the Blitz; it's a test of the escape alarm at the local mental hospital, Broadmoor.

Broadmoor Hospital lies on the edge of the small town of Crowthorne, in an area of heathland known as Bracknell Forest. Escapees could presumably run in any direction, and there is a network of 13 sirens covering the surrounding towns of Sandhurst, Camberley, Bagshot, Bracknell and Wokingham. Many units are mounted on high masts, and could easily be overlooked as mobile phone masts. The sirens are connected to the hospital by telephone lines, and it has been known for BT engineers to inadvertently set them off. Many are located in the vicinity of schools, although there is a separate system to alert all local schools should an inmate escape. In this event, each school has a set procedure to follow, which consists of locking the children inside until parents can come and collect them.

Broadmoor Hospital was the country's first purpose-built asylum for the criminally insane, completed in 1863, and it currently houses 500 men and 120 women inmates. It was built under an act of Parliament to reform the poor conditions in institutions such as Bethlehem Hospital, aka Bedlam. Its imposing classical Victorian architecture was the work of Major General Joshua Jebb, a military engineer who is said to have based the building on two other hospitals - Wakefield and Turkey's Scutari Hospital.

One of four maximum security hospitals in the UK1, Broadmoor has housed some of the UK's most notorious criminals and lunatics, including:

The Escape of JT Straffen

The siren was installed following a public outcry at the escape of child-murderer John Thomas Straffen in April 1952. Straffen had a history of mental illness and was sent to Broadmoor after he strangled two young girls in Bath in 1951. Six months later, Straffen went over the wall, with little difficulty, and walked away. In the nearby village of Arborfield he strangled five-year-old Linda Bowyer, who had been out for a ride on her bicycle. He was recaptured by police shortly afterwards.

Straffen was controversially tried, found guilty and initially sentenced to hang, but was reprieved by the Home Secretary, and sent instead to a series of maximum security prisons. He had the distinction of being Britain's longest-serving prisoner, eventually dying behind bars on 19 November, 2007, at the age of 77.

Could It Happen Again?

Thankfully, escapes from Broadmoor have been very rare. The last major incident was the escape of child rapist James Saunders, nicknamed the Wolfman, who went on the run for the second time in 1991. Saunders sawed through a one inch thick steel bar and squeezed out of the window of a shower room on the third floor. He was recaptured two days afterwards.

The alarm was also sounded in 1993 after a stabbing incident inside the hospital, but it has not been sounded in anger since.

For all of this, Broadmoor's security track record is seen to be a good one, and security measures are being constantly improved, including the recent addition of a second perimeter fence. Local residents however will always be reminded on Monday morning at 10 o'clock that every parent's worst nightmare could one day happen again.

1The others being Ashworth in Merseyside, Rampton in Nottinghamshire and Carstairs in Lanarkshire.