Guerrilla Gardening Content from the guide to life, the universe and everything 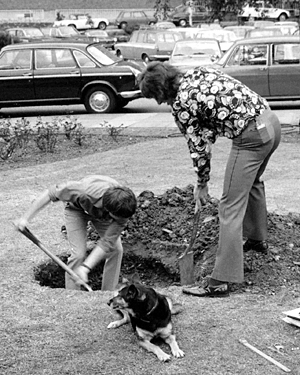 Living in any large city can become an impersonal and soul destroying experience, surrounded by the greyness of concrete, graffiti and those neglected areas that have degenerated into eyesores. Urban living can be a struggle of the spirit, but what is surprising is the variety of ways people find to combat this and regenerate life, colour and a sense of vibrancy into local communities. In cities throughout the world there are networks of such people who call themselves guerrilla gardeners.

What is Guerrilla Gardening?

Guerrilla gardening is the act of reclaiming empty and neglected spaces and illicitly transforming them into unofficial gardens by filling them with flowers, plants or sometimes fruits and vegetables1. The spaces guerrilla gardeners create are not planted and forgotten, but become a long-term commitment that are usually fed, watered and weeded regularly. The spaces chosen for this greening process are typically untended tree pits, borders and derelict areas, in fact any spot of land that guerrilla gardeners can 'take back' into the public domain.

The Origins of Guerrilla Gardening

The heritage of guerrilla gardening can be traced back at least to 17th Century Surrey in England. After the English Civil War the fierce debate about how the country should be governed became a fermenting ground for new ideas and idealistic philosophies. One person who became known for his progressive beliefs was Gerrard Winstanley who, in 1648, established the True Levellers, or as they became better known, the 'Diggers'. Winstanley believed in the connection between people and nature, stating:

True freedom lies where a man receives his nourishment and preservation, and that is in the use of the earth

He put this ideology into practice by digging up common land on Saint George's Hill in Weybridge and cultivating crops. His followers encouraged others to join them and offered meat, drink and clothes in return2.

The contemporary origins of guerrilla gardening began in 1973 in New York when artist Liz Christy and friends named themselves the Green Guerrillas and started to clear some abandoned land on the corner of Bowery and Houston, on the city's Lower East Side.

Guerrilla gardening has now become a global phenomenon with groups active in many parts of America, including Los Angeles and Minnesota, as well as cities throughout Europe, Canada and Japan. The UK also has a healthy network of guerrilla gardeners in towns and cities as diverse as Todmorden, Glasgow and, of course, London.

The leading figure in the guerrilla gardening movement in the UK is Richard Reynolds, who in 2004 set up a blog to record his guerrilla gardening exploits around London. He has also written a book entitled On Guerrilla Gardening: A Handbook for Gardening Without Boundaries4.

Reynolds, a freelance advertising planner is well known to the media and to a lesser extent the police for his guerrilla gardening activities. He has travelled extensively around the world speaking on the subject of guerrilla gardening, leading him to be described as a 'subculture celebrity and public intellectual'5.

It is due to Reynolds' level of commitment that guerrilla gardening has developed a high profile in the UK with teams established in many cities. Richard's dedication can also take at least some credit for guerrilla gardeners becoming active in cities around the world. In fact his blog appears to have become a global focal point with guerrilla gardeners from numerous countries posting photographs and updates of their latest work.

Richard's latest project is the launch of the Pimp Your Pavement Campaign. This is an attempt to encourage both local authorities and the public to embrace the benefits of guerrilla gardening. Richard describes this campaign as:

a way of giving people, particularly newcomers, a very tangible objective – transforming a patch of pavement and taking back responsibility from the local authorities who have plenty of other things to be concerned with on our behalf. Pimp Your Pavement will be a more palatable way of inviting the authorities who are in charge of most of our pavements to participate in this grass roots enthusiasm. In cities around Europe (Zurich, Berlin, Amsterdam and to a much lesser extent London) I've seen how guerrilla gardening can change the authorities view of their responsibilities, and I'm keen that these examples are inspiration to encourage change in more places.

Tools of the Guerrilla Gardener

As well as the traditional gardening utensils of spade, fork, trowel and watering can, guerrilla gardeners have one more tool at their disposal: the seed bomb. In the early days of the movement this was usually made from peat moss, water, fertilizer and seeds encased in a Christmas bauble or a water balloon. The seed bomb is thrown onto areas that are either inaccessible to guerrilla gardeners or where they fear the possibility of legal action if they disturb the ground. Once thrown the seed bomb contains everything for the seeds to germinate and to take hold.

There are now improved designs of the seed bomb which can come in many forms, including commercially available varieties. However, seed bombs can easily be made at home from basic ingredients such as clay soil, peat free compost, organic fertilizers, seeds and water.

The Benefits of Guerrilla Gardening

Although the activities of guerrilla gardeners may be illicit6, and may sometimes appear to be working against the wishes of local authorities, they are as a whole socially responsible, and keen to point out the advantages of what they do. Guerrilla gardening can for instance play a significant role in building a sense of community by bringing together people from different generations and reinvigorating a sense of pride in their local area. This in turn provides a constructive means of self expression as well as being a therapeutic and relaxing social activity.

Guerrilla gardening also provides environmental benefits by creating natural passageways for wildlife, and the increased number of urban plants plays an important part in attracting pollinators such as bees and butterflies. The increase in vegetative cover has been shown to help decrease heat in urban environments whilst the soil provides natural drainage during flash floods.

The economic value of guerrilla gardening also has significance, particularly when it helps to reduce the costs of public maintenance for local authorities.

In the UK some groups have become so accepted they even receive funding from councils as well as local businesses. In Liverpool the John Moore University has set up a scheme to encourage people to take on a plot in their local area and turn it into a community garden.

Although London's Lord Mayor has pledged to create 2012 new vegetable plots by (not surprisingly) the year 2012, the general reception of guerrilla gardening in London is more ambivalent. However, there have been some encouraging responses. When Shaun Canavan, an elderly blind resident of Kentish Town began planting up tree pits in his street, Camden Council lifted more paving slabs to provide him with more space.

Generally however, local authorities tend to be more resistant, citing reasons such as health and safety issues, as well as claiming they have better resources than guerrilla gardeners to manage public spaces. They also claim council workers will dig up plants left by guerrilla gardening networks.

Richard Reynolds is well aware of the views of the London authorities and counters by saying the health and safety issues are minimal8, that even if local authorities do have the resources to manage public spaces they often fail to do so, and that it can be more efficient to hand over some of the resources to local people who are willing to invest time and effort on such projects. Reynolds also argues that local council employees are very unlikely to dig up a well-cared-for guerrilla garden and will leave them to flourish.

Given the increasingly urbanised environments many people are compelled to live in, it can be both refreshing and surprising to see the resourcefulness of some individuals who not only make the most of their surroundings but also take positive steps to add more substance and soul to their community. Guerrilla gardening is seen by some as an essential part of this reinvigorating of urban life.

1It is extremely inadvisable to grow vegetables in public spaces without knowing how clean the soil is. There is the risk you could be using soil contaminated with chemicals or other industrial activity. Local authorities should have some idea which land is contaminated and which is clean, but they are unlikely to allow crop production in public spaces. It is also possible to get the land tested for contamination, but this can be an expensive proposition. For more information check the Environmental Protection website.2Legal action which would have involved the army if they didn't comply meant the Diggers' activities eventually had to stop.3Sadly, Liz Christy passed away at the age of 39 after a struggle with cancer. The Bowery Garden is now known as the Liz Christy Community Garden.4Bloomsbury Press, 2008.5The New York Times.6In fact, in most countries, gardening on someone else's land without their permission, however neglected, is illegal.7Façade gardening as it is known.8Disturbing contaminated soil is one serious health and safety risk that cannot be ignored. See footnote 1.