The Hand of Glory Content from the guide to life, the universe and everything 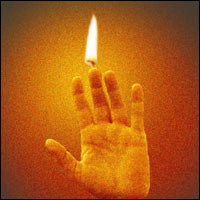 The Hand of Glory, a talisman popular among thieves and robbers during the time of the witch-hunts in Europe, was a dried and pickled human hand believed to possess supernatural powers. The hand was lit like a candle and was supposed to render the inhabitants of a house paralysed, or unable to awake from their sleep.

The creation of the Hand of Glory is an involved practice. First, a hand must be severed from a man who has been hanged as a convicted murderer. It is preferable that the man be not long dead. Some sources reveal that it is preferable that the left hand be the one severed, and by a sharp blade. The moon should either be full or eclipsed. Once acquired, the hand must be wrapped in a cloth and squeezed tightly so as to drain the blood completely from it.

The hand must then be prepared. Sources differ on what ingredients are used in the process, but it is certain that the hand must be rubbed well with a mixture that may be any combination of the following (though salt is usually a constant): salt, saltpetre, crushed black pepper, crushed sesame seed, a few long peppers, and zimat1. The hand must then be buried with this same mixture in an earthen vessel for two weeks. In some cases, the hand must be dried for 15 days.

There seem to be two major varieties of the Hand of Glory. In the one case, the hand grasps a candle between its fingers. In the other, the hand is itself used as a candle. If the hand is to be made to grasp a candle, the latter must also be carefully prepared. The candle must be formed by reducing (boiling) the flesh of a hanged man (it need not be that of the same man from whom the original hand was taken) to produce a fatty substance that must then be mixed with Lapland sesame2 and formed into a candle. The wick is made from the victim's hair.

After the hand is removed from the earthen vessel it must be dried further, either by the sun, if the days be long, or by keeping it in an oven lighted with fern and vervain. Once the hand has been fully desiccated, it is ready to grasp the candle. The fingers of the hand must firmly secure the candle, either in a grasp, or by having the candle protrude from between the second and third fingers of a fist. If the Hand of Glory is used in this manner, its power is said to double. However, the entire hand may also be formed into a candle by treating it with the same mixture used to form the aforesaid candle, and by inserting wicks into the tips of each finger.

Alternatively, the Hand of Glory can also be made to grasp another type of candle. Villains in the 17th Century often murdered pregnant women in pursuit of these candles, which were made from the fingers of unborn children. These candles are prepared in the same manner as the Hand of Glory, and are sometimes used separately from it, possessing mostly the same charm.

Information is lacking to determine the true effectiveness of the Hand of Glory, and as such use should not be readily attempted under the pretext that the object possesses any supernatural properties. It should be assumed that any power the hand was said to possess is entirely confined to folklore and superstition. The ambiguity in the sources as to the preparation of the Hand of Glory is enough by itself to discourage its use, since if the thing were to be improperly prepared it probably would not have any effect. To put all else aside, obtaining a human hand under the proper circumstances in this day and age should prove to be quite a difficult task.

The charms attributed to these items function on the principles of homeopathic magic: the transference of the principles associated with one object to another. In this case, the user of the Hand of Glory seeks to infect his victims with the afflictions of the dead. The dead can not see, hear, move, etc, and so the logic follows that after lighting the Hand of Glory, neither will the residents of the given house be able to stir from their sleep, being as dead. Other stories relate the tossing of dirt from a grave over a house to cause a similar effect, or beating the arm of a dead woman on the ground in front of a house.

The name 'Hand of Glory' may be traced to the French 'main de glorie', or 'mandrogore', and more commonly the English 'mandrake'.

The general outline for a tale concerning the Hand of Glory is as follows:

The tale generally follows this format but then tends to differ depending on the variety of the Hand of Glory being used. In some tales the thumb will refuse to light if there is still a person besides those lighting the hand still awake in the house. In this case, the serving girl is able to wake her master and drive the thieves out. In other cases, the hand is lit successfully and placed somewhere while the thieves go about their work. If this situation presents itself, the serving girl attempts to douse the flame or flames of the Hand of Glory. However, the candle or candles remain lit despite being plunged into water or otherwise wetted or smothered. As the serving girl is inevitably the heroine of these tales, after she fails to douse the Hand of Glory in water, she suddenly recalls the only method to put it out effectively, which is to use milk. After the candles are put out, the house awakens and drives the thieves out.

During the 18th Century homeowners attempted to discourage the effectiveness of the Hand of Glory by smearing the exteriors of their houses with various ointments, among which was the blood of the screech owl, the fat of white hens, and the excrement of black cats.

1Green vitriol or iron sulphate.2Les Secrets merveilleux de la magie naturelle du petit Albert Lyons (1668) gives this as 'Sesame of Laponie'. However, as there was probably no sesame in Lapland in 1668, Sesame of Laponie probably refers to sesame and la ponie, or horse manure.