The No-Eyed Big-Eyed Wolf Spider Content from the guide to life, the universe and everything 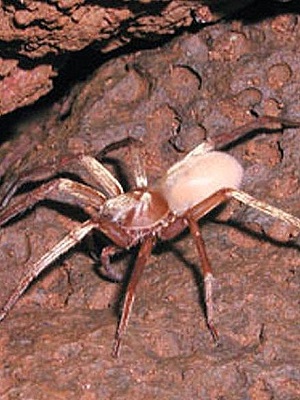 That title sounds like a bit of a contradiction but hopefully when you get to know this most fascinating of endangered creatures you'll appreciate the beauty of the no-eyed big-eyed wolf spider (Adelocosa anops), also called pe'epe'emaka'ole1, or more properly the Kaua'i Cave Spider.

You're unlikely ever to meet a no-eyed big-eyed wolf spider because the entire world population lives in three of six suitable, privately-owned caves on the volcanic island of Kaua'i2, Hawaii. Kaua'i itself is a very beautiful island paradise offering all the wonders one would expect from a Hawaiian adventure and this is maybe why the no-eyed big-eyed wolf spider wasn't discovered until 19713. There are three populations of the spiders which live in lava tubes within the basalt caves and are incredibly hard to spot let alone monitor. They favour almost 100% humidity and there are currently 30 known adult spiders.

The no-eyed big-eyed wolf spider is about three-quarters of an inch long (about the size of a 1p) and quite colourful for a critter that never sees the light of day. It's reddish-brown with a silver abdomen and legs that range from beige to orange. It has three large teeth on its biting jaw and has venom sufficient to stun prey.

The Kaua'i Cave Spider is a member of the big-eyed wolf spider branch of the arachnid family. The spiders possess the big-eyed moniker because they have two big eyes in the centre row of their eight eyes. Nice!

However, at some point the Kaua'i found a rich source of food with the caves of the island and chose to live its life in the total darkness. Over time, evolution kicked in. The spider's eyes, all eight of them, big and small, gradually became obsolete and eventually disappeared altogether, leaving us with the no-eyed big-eyed wolf spider.

Like the regular big-eyed wolf spider the cave dwellers don't spin webs – they chase their next meal. Without the keen eyesight of the surface dwellers they rely on following their prey's chemical signature. Observers can't be certain, but they suspect that the spiders may sometimes just sit around and pounce on passing prey when the opportunity presents itself. For the no-eyed big-eyed, that meal is another endangered inhabitant of their small cave eco-system, the amphipod. These creatures also evolved in the pitch-black caves and look a lot like a tiny see-through shrimp – without the shell. Neither predator nor prey have eyes, so if you could see the chase it'd be interesting.

Happily, the beastie proves no threat to mankind, quite the contrary in fact. The greatest threat to their existence is man and everything he brings to the landscape from agriculture and chemicals to regular pollution. The spider needs dark, moist caves to thrive and due to all of the above its habitat is shrinking as the caves dry out.

Although their numbers are few they are still multiplying and the female carries her egg sac in her mouth until they hatch. However, they don't reproduce in the numbers that regular big-eyed wolf spiders do and only produce around 15 to 30 eggs as opposed to hundreds. Still, the hatchlings are unusually large and are well cared for as they ride around on mum's back clinging on with comb-like spines on their front legs until they are able to hunt for themselves, when they leave home and settle in their own little patch of darkness.

Although these creepies are endangered and difficult to monitor, perhaps they were never great in numbers and were always just a small population of mutants in an environmental nook rather than a great evolutionary turn.

1Hawaiian name.2Kaua'i is known as the garden isle and home of some Hollywood blockbusters, including the remake of King Kong.3By Dr Frank Howarth of the Bishop Museum.