The Vesica Piscis - The Fish as Spiritual Symbol and Bumper Sticker Content from the guide to life, the universe and everything 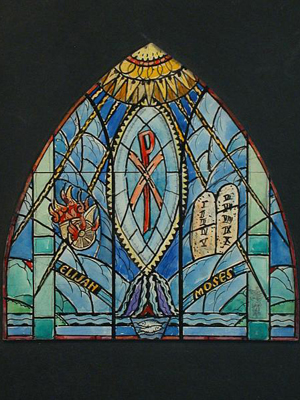 From its earliest times, Christianity - the dominant religion of the West for the last millennium and a half - has been quietly syncretic; that is to say Christianity has taken over and adopted (usually without attribution) the legends, sacred sites, and symbols of older religions, adapting them to fit its own story. From classical times on, everywhere the missionaries went, gods became saints, holy wells became the scenes of miracles, and symbols acquired new meanings. Holidays were reworked to commemorate central events in the life of Christ and his followers - Passover and other spring festivals became Easter (originally the word for a pagan festival), Yule became Christmas, the time of Jesus' birth.

As time went on, the original meanings of these festivals and symbols were lost, and only the Christian designations remained. It is not commonly known today that 25 December was once regarded as the birthday of the god Mithras, and these days holly and ivy are seen merely as attractive Christmas decorations.

The explanations offered for various items of what is now Christian symbolism sometimes differ sharply from those of the older pagan systems. Although the 'Black Madonna' - originally a representation of Isis holding her child Horus, the 'crowned and conquering child' of Egyptian mythology - is not much different from the idea of Mother Mary and her Baby, the symbol of the Fish, the Alpha, the Christ, the Son of God, has come some distance from its original significance as the womb, the nexus of spirit and matter, the great interface of heaven and earth.

Draw a circle. Then draw another circle of equal size over the first circle, so that the centre of the second circle lies on the circumference1 of the first circle. The lens-shaped area that is created by the intersection of the two circles is the vesica piscis2, or 'vessel or bladder of the fish'. If you turn the vesica piscis on its side, and add the two arcs of the intersecting circles on one side to make the tail, you get the fish.

In terms of sacred geometry, the vesica piscis is extremely interesting. The mathematical ratio of width to height of the mandorla, or lens-shaped part of the symbol, is the square root of 3, which is 1.7320508, or approximately 265/153. Pythagoras considered the figure to be holy. Making the figure is important in constructing an equilateral triangle. The proportions of the vesica piscis also play a role in the design of the Gothic arch.

The number 153 figures in the Bible. In the gospel of John (John 21), there is an account of a miraculous catch of fish made possible by the risen Christ. The number of fish caught is given as 153. John's gospel has long been regarded as a Gnostic3 text.

Christian teaching has associated the vesica piscis symbol with Christ from the very beginning, as inscriptions from the catacombs of ancient Rome show. The standard Christian explanation is that the symbol represents an acrostic for the Greek words Iesous Christos Theou Huios4 Soter, the first letters of each word being used to spell the word Ichthys - Greek for fish. The fish seems to have been used by early Christians as a recognition symbol during the period in which they were a persecuted minority.

The association of the symbol with a fish is indeed ancient, but has quite different roots, as will be seen.

The vesica piscis is an ancient symbol known to many mystical religions. Ichthys was the son of the ancient sea goddess Atargatis, also known as Tirgata, Aphrodite, Pelagia or Delphine5. Her name also meant 'womb' and 'dolphin' in some languages, and so the vesica piscis symbol is sometimes associated with mermaids. The idea of a cult of the 'Fish Mother' goes as far back as the Danube Basin in the 6th millennium BC. It has been suggested that the priestly headgear called the mitre, now worn by Catholic bishops, has its source in the shape of the fish.

The association of the vesica piscis with the womb is of great antiquity. Diana of the Ephesians is depicted with the fish symbol covering her genitalia, and there are the famous stone female statues called 'sheela-na-gigs'6 which were once common in Ireland.

On a more intellectual level, the upper circle can be said to represent Pneuma, or spirit, the lower, Hyle, or matter, and the intersecting fish symbol represents Psyche, or the soul - the intersection between spirit and matter.

The Vesica Piscis as Modern Symbol

However people in the past may have interpreted the symbol, the vesica piscis is now firmly identified in modern popular culture with evangelical Christianity, particularly in the United States. The symbol pops up in that country as a magnet on cars, as a keychain ornament, and on signs and bumper stickers - sometimes in its classic form, and sometimes not. As this symbol is sometimes taken to indicate a bias toward Creationism - an opposition to teaching evolutionary theory in public schools - irritated supporters of Darwin sometimes sport their own fish-like bumper stickers.

The persistence of the fish symbol in modern popular culture is another indication that in symbology, as in so many other areas of human thought, nothing is ever really lost.

Geometer's Angle no. 12: Musings on the Vesica Piscis

1Outside edge.2Called by Philip K Dick the 'vesicle piscis'. Don't learn languages by reading Philip K Dick.3Gnosticism is a catch-all term used to describe mystical trends in early Christianity, which were labelled as heresies by the official Church. The common thread seems to have been the belief that there was a form of gnosis, or inward knowledge, that had been neglected by official religion.4Alternate spelling, 'Yios'.5On Cyprus, the Virgin Mary is still known as the Panaghia Aphroditessa.6According to Barbara Walker, in The Woman's Encyclopedia of Myths and Secrets, the sheela-na-gig is a 'naked woman...displaying her vulva, which is shown as a vesica piscis.'