Driving in the Australian Outback Content from the guide to life, the universe and everything 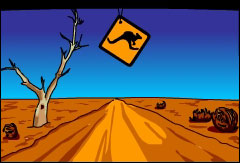 As mentioned in the Australian Driving Etiquette entry, waving to every other vehicle when driving in the outback is common practise, but there is also a whole other lot of knowledge that will make the 'outback experience' a lot easier for first timers. Seeing as most of Australia consists of bugger all with a road running through it, this is a subject that needs an entry to itself.

Some of this entry applies to sealed roads (ie, blacktop); all of it applies if you intend to hit the unsealed roads, which you should if you want to really see Australia at its uninhabited finest. Don't bother going on the tracks though unless you have a four-wheel drive, or you will kill your car.

Essential Knowledge about the Outback Way of Driving

Well, hopefully you've been put off driving in the outback forever, so that it'll remain devoid of seething humanity. If not, all the above advice notwithstanding, enjoy!

1For the uninitiated, these are huge trucks towing two or three trailers full of fuel, cattle, food, beer, and all the other essentials of outback life. They can be up to 53.5 metres long, (if you can't picture that, it's big, especially when one passes you doing silly km/h.) And yes, they do take them down the dirt tracks.2The lovely folk who run the cattle stations (probably the only locals for hundreds of kilometres in any direction). Generally they are the nicest people you'll ever meet, but be aware that living in some of the most isolated spots on Earth for most of their lives can bring out eccentricities in people.3Northern areas of Australia are in the Tropics. Instead of the four seasons as we know and love them, they have the wet, when it rains, and the dry, when it doesn't. During the wet, all the above advice will be superfluous, as you will be stranded somewhere by a flood that has made all the roads disappear, along with most of the rest of the land.