The Christmas Market, Birmingham, UK Content from the guide to life, the universe and everything 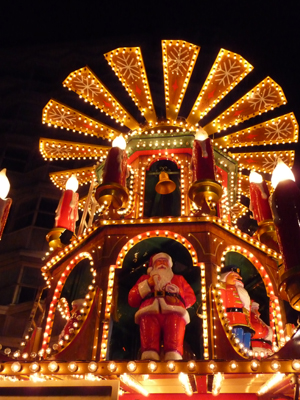 Every year since 2000, the city centre of Birmingham has played host to dozens of stalls in the run-up to Christmas. The stalls constitute the German market, which comes from Birmingham's twin city, Frankfurt. These combine with local stalls, known as 'the Christmas Craft Fair', to create an impressive shopping experience.

The market begins in mid-to-late November and ends just before Christmas; it opens from ten o'clock in the morning until nine o'clock at night, although some stallholders will begin packing up early, especially if trade is quiet. That said, an evening visit is recommended, as the bright lights on many of the stalls lend a more Christmassy feel to the whole event. It can get very busy, especially at weekends. This means that making your way around, particularly near the stalls selling alcohol or food, is a case of pushing your way through wherever you can find a gap - but it does add to the atmosphere.

The market is right in the centre of the city1. The German market section extends from New Street up to Victoria Square in front of the Council House. From there through Chamberlain Square even through Paradise Forum towards the Repertory Theatre and the National Indoor Arena is the Christmas Craft Fair. In this area, don't be surprised if you hear some Brummie accents - some locals get in on the act as well.

In 2008 there were 2.8 million visitors to the market, providing a boost to the local economy to the tune of £67 million. Although it is hardly the only British city to host a German market at Christmas, the Birmingham market has become the biggest German market outside Germany or Austria - the 2009 market saw around 94 stalls. If the Christmas Craft Fair is included, the number of stalls was about 180.

The prospective German stallholders apply to the authorities in Frankfurt who liaise with their Birmingham counterparts through the summer and autumn to organise the market. At the end of the last day of the market, it has become traditional for stallholders to give loose change and unsold food items to local charities.

The stalls sell a range of items including jewellery, 'ethnic' goods imported from all corners of the world, wooden toys, ceramics, brightly coloured woollen hats and gloves (sure to bring you out of the winter blues), Christmas decorations and many other items. You are sure to find some inspiration for Christmas gifts. The goods tend to be a bit different than those sold in shops, so you may even find something for those awkward older relatives.

Perhaps the most prominent stalls though, as you walk around - especially for those less interested in shopping - are the food and drink stalls. These tend to be located towards the back of the market near the Council House, which is probably a canny ploy to make visitors pass the other stalls before they can eat, thereby increasing sales!

A host of food can be found, including both snacks and meals:

The stalls offering beer and hot chocolate charge a deposit of a few pounds for the return of the glasses and German mugs. If you prefer to keep one, don't worry, you won't have to steal it. You're allowed to keep them if you like but you will have to forfeit the deposit.

Children love the brightly-lit helter skelter and carousel in Victoria Square, which they can ride for a small fee.

There is no equivalent Birmingham market in Frankfurt. It's not clear whether one was ever suggested – maybe the natives of the city just don't appreciate a good curry.

1Making it extremely accessible to the many visitors from around the country, especially those travelling by train due to the proximity of New Street Station.