The Gaffney Peachoid Content from the guide to life, the universe and everything 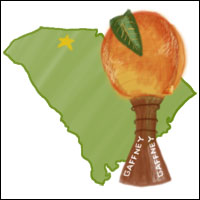 Monstrous injustices exist in the area of public opinion. This is the tale of one of them, and how it was rectified with the help of a determined public works office and 50 gallons of paint.

A Georgia peach, a real Georgia peach, a backyard great-grandmother's orchard peach, is as thickly furred as a sweater, and so fluent and sweet that once you bite through the flannel, it brings tears to your eyes.
- Melissa Fay Greene, Praying for Sheetrock.

As everybody and his cousin knows, most peaches come from Georgia. (The Georgia in the US, of course, not the one on the borders of Europe.) Right?

Cherokee County in South Carolina - where the town of Gaffney, population 12,9681, is located - produces almost as many peaches per year as the whole state of Georgia2. So there.

And those people in Georgia call themselves 'The Peach State'. Pretty Southern girls are called 'Georgia peaches'. What to do about it?

This is a tale of water, paint, and public relations.

If you get in your car in Charlotte, North Carolina - and why not, on a sunny day? - and head south towards Atlanta, Georgia, on Interstate 85, you will see a wondrous sight in the distance as you approach Exit 90. An amazing giant peach looms on the horizon, its full-colour glory accented with a tastefully placed leaf. You will notice a highway sign: 'To view peach, take Exit 90.' This is to prevent you from breaking the law by parking on an interstate to gawk.

The Peachoid, as it is called, is a prime example of novelty architecture: it is a 150-foot water tower that holds 1 million gallons of water. The 60-foot-long leaf weighs 7 tonnes. The Peachoid announces to the world that South Carolina is the true peach capital of the planet. It brings in tourism and is much admired and photographed4. It attracts Japanese visitors, who associate much symbolism with the peach. How cool is that?

In my mind, I'm goin' to Carolina
- James Taylor5, Carolina in My Mind.

The Gaffney Board of Public Works commissioned the Peachoid in 1980. It took 5 months to build. The artist Peter Freudenburg painted the realistic objet d'art.

A thing of beauty is a joy forever - as long as the paint, steel, and concrete hold out.

The Gaffney Peachoid is located in Cherokee County, South Carolina, an easy drive south of Charlotte, North Carolina, which boasts a major airline hub. Car rentals are available at the airport, and international driving licences are honoured6. The local currency is the US dollar.

When visiting South Carolina peach country, it would be a good idea to stop in the neighbourhood of Filbert, South Carolina, at the Sanders Peach Orchard. Dori Sanders, the famous novelist, not only has been known to sell her family's peaches there, but also to offer insightful and often lyrical information on the subject of peaches in general.

1As of 2000. Someone may have moved out.2According to 2009 figures, South Carolina is now outproduced by the glorious state of California, that fruit-growing heaven on the West Coast.3 Gus Kahn was born in Koblenz, Germany, and died in California. His connection with the Carolinas is largely musical.4There is little else to admire and photograph unless you are a historian intent on visiting the backdrop of The Patriot.5Although born in Boston, Massachusetts, James Taylor was raised in Carrboro, North Carolina. He is forgiven.6Those planning to combine peach research with fishing in nearby Lake Wylie should be advised that - as the lake is located in two states - fishing licences are required for both North and South Carolina. Game wardens have been known to board boats for the purpose of licence inspection, and fines are stiff.