Mount Rushmore, South Dakota, USA Content from the guide to life, the universe and everything 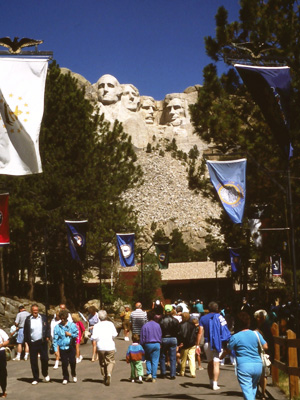 Mount Rushmore is hailed as the world's greatest mountain carving. A memorial to what they call the growth and development of the United States of America.

Located in the Black Hills of South Dakota, the project got underway in 1927 and took 14 years to complete, although only 6.5 years were spent on actual carving. The total cost of the project was nearly $1 million, much of which was raised by sculptor Gutzon Borglum himself.

From left to right, the sculptured busts1 of Presidents George Washington, Thomas Jefferson, Theodore Roosevelt, and Abraham Lincoln - 'the most famous four guys in rock' - represent the American character, its ambitions and visions as a nation.

Interestingly over 90% of the sculpting on Mount Rushmore was done with dynamite.

About 2.5 million tourists visit Mount Rushmore each year; not surprisingly, the summer is the busiest season. In addition to gawking at the busts themselves, visitors can also visit a historical museum and the sculptor's studio, and hike the 'presidential trail'. During the summer months, there are also special programs for children and seminars on sculpting. Many college students work as volunteers or interns at Mount Rushmore during the summer, receiving room and board in exchange for guiding tourists.

1The busts are about 60 feet tall.