Yellow Mountain (Mt Huangshan), China Content from the guide to life, the universe and everything 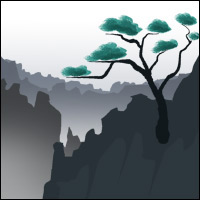 The range of mountains in Anhui province, China, known collectively as Yellow Mountain or Mount Hunagshan1 is a Unesco world heritage site2 of which it is said that once you climb the mountains, you'll never want to climb another. They're not particularly high, with only three of the 72 named peaks rising higher than 1,870m, but hikers amongst the steep slopes find travel there both strenuous and rewarding. In appearance they are a seemingly never-ending series of jagged granite peaks, cloaked with bamboo forest, separated by deep chasms, and dotted with wind-twisted and gnarled pines that cling impossibly to the sheer slopes. The various shapes that can be seen in the face of the mountains and in the pine trees have provided rich fodder for many legends and tales, and give rise to interesting names for the various spots, such as cloud-dispersing pavilion, beginning to believe peak, and welcoming guest pine.

The area is much beloved by painters, and indeed walking through it feels like familiar territory, as if one were inside a scroll painting. The name of the mountains changed from Black Mountain (or Yishan) in 747 AD by imperial decree, though the specific reason and association with the Yellow Emperor Xuanyuan is mixed up in legend. Certainly there's nothing yellow about the appearance of the mountains themselves.

The site's popularity is understandable: many Chinese regard it as sacred and aim to conquer it at least once in their lifetime. It gets very busy, especially during the summer months, although it's always easy to find a secluded spot off the beaten track3.

Trains and buses, from the nearest big cities of Shanghai, Hangzhou and Nanjing, go regularly to the base town of Tunxi (also known as Huang Shan Shi), which also has a small airport. Regular shuttle buses go from Tunxi to the main access point at the foot of the mountain, 50km away.

While it is possible for hikers to take a zig-zag path right up the mountainside from the access point, this tough means of ascent will take between 2 and 8 hours depending on route and fitness levels. Most visitors prefer instead to ascend using one of the 3 cable car routes, leaving themselves more time to enjoy walking up and down the stepped paths on the mountain peaks. Passengers on the cable cars enjoy views more stunning than those seen from the hiking trails, and it is easy to get a few good photos on the way up.

A number of hotels and bunk houses nestle within the mountains. They are busy and expensive during the summer months, while cheap - or even closed - during the colder winter season. This sort of accommodation lacks air conditioning, usually unnecessary on the windy mountain tops, while the presence of large groups of youths can create a lot of noise. The locations also lack much in the way of entertainment, so visitors should take along books or games to amuse themselves, as well as a set of ear-plugs to be assured of some peace. Most visitors will be getting up early to see the sunrise, so don't expect a quiet lie-in.

The mountains lack roads, so porters carry everything that needs to be brought onto and off the mountain, using bamboo poles to ferry their loads of laundry, food and rubbish. Porters suspend two packages, one on each side of a long bamboo pole held behind their heads across their shoulders4, and use a second pole at almost right angles to this to help balance and weight distribution. They dislike having their photos taken; probably because once they get the momentum going for a run up or down a flight of steps any interruption to the flow is unwelcome. They tend to do this physically demanding job for no more than four years at a time. Porters await the arrival of cable cars, and will offer to carry your bags to your accommodation for about £4, or carry you yourself in a sedan chair for about £40.

There are many trails to various viewing points, almost all of them well marked. Many visitors buy or bring a walking stick to help them negotiate the steep paths. A wide variety of birdlife and plant life provides a source of pleasure for many viewers, whilst the beauty of the place attracts many painters.

Watching the sun rise between the peaks is considered a 'must-do' for visitors, and the front of the Beihai Binguan hotel provides a popular spot to do this. Amazingly enough, there's even a branch of the Bank of China there, complete with ATM.

Visitors may find many of the fences in the area covered in rusting padlocks. These intriguing finds are placed there by romantic couples, who believe that if they place a lock on the mountain, and then lose the key, then their union will endure forever and they will never be parted.

The weather can be unpredictable on the mountains, changing with little notice - so visitors should come prepared for all sorts of conditions. Many hotels can supply visitors with padded jackets for cool mornings watching the sunrise. The sunshine in the mountains can be very strong, so the use of sunblock is advisable.

Further information on visiting this area can be found at Mt Huangshan website, which also includes some pretty photographs.

1Generally speaking, the Chinese refer to what is actually a range of mountains in the singular, Yellow Mountain.2Awarded in 1990.3The track is mostly concrete and consists of a series of flights of stairs going up, and then down, and then back up again. And repeat.4Rather like a yoke used by oxen in agricultural settings.