The Case for Despair Content from the guide to life, the universe and everything 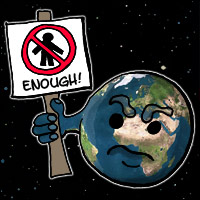 Is it time to abandon hope for the human race? It seems increasingly likely that, by the end of this century, deserts will have expanded, areas of coastline will have disappeared beneath the sea and millions of people will have died of starvation or the effects of war. A three-fold crisis is gathering around us, and it seems unlikely that we have the wit or wisdom to tackle the three elements of global warming, population growth and over-consumption.

The evidence is mounting that the Earth is warming quicker than many scientists predicted. In April 2009, an ice bridge snapped on the Antarctic peninsula that had linked the Wilkins Ice Shelf to Charcot Island, indicating that the ice may be breaking away. Recent reports from Siberia reveal that the permafrost there is melting rapidly. As it melts, methane is released, accelerating climate change even further.

According to an article by Gaia Vince in the New Scientist on 28 February, 2009, many scientists think that the temperature of the Earth will rise by 4°C by 2100, with some predicting that this level will be reached as early as 2050. The Intergovernmental Panel on Climate Change predicted a rise of anywhere between 2°C and 6.4°C this century, and their conclusions are viewed as conservative. In August 2008, Bob Watson, former chair of the IPCC warned that the world should 'prepare for 4°C of warming'.

The consequences of a warming of even 4°C are frightening. As the Greenland ice sheet and parts of Antarctica melt, sea levels would rise, flooding coastal regions with up to two metres of water. This would mean the loss of land in Bangladesh and in Polynesia, while New Orleans and Venice would disappear.

Large parts of the Earth's surface are likely to become desert, with the Sahara stretching into Europe. Global warming will hit the tropics hardest. India, Bangladesh and Pakistan will experience shorter but fiercer monsoons, bringing devastating floods. Yet, as the land becomes hotter, water will evaporate faster, giving rise to drought across Asia.

As glaciers melt, rivers which draw their water from mountainous areas will dry out. These include the Rhine and Danube in Europe, the rivers which rise in the Peruvian Andes and the rivers of the Indian subcontinent, which flow from the Himalayas and the Karakoram Range. Many of the world's great cities will become unbearably hot and people will be forced to move towards the poles.

At the same time as the Earth heats up, the human population is growing. In 2007, the UN Population Division projected that the world's population will probably exceed 10 billion by 2055. From there, it may decline, due to problems of health, poverty and environmental degradation.

If the Earth's population grows from its present 6.5 billion to 10 billion in the coming century, it will be almost 50% harder to feed the world, stop climate change and prevent the exhaustion of resources. Attempts to limit population growth have been hampered by opposition from the Catholic Church, among other organisations. Green groups have been reluctant to discuss the problem of over-population, as it seems like blaming the poor for the world's problems, as the fastest population growth is occurring in developing countries. However, it is surely irresponsible to avoid the issue altogether.

If over-population is considered a threat, it needs to be linked to over-consumption. In an article in The Guardian on 29 January, 2008, George Monbiot points out that the global economy is predicted to grow by about 3% a year this century. This means a doubling of economic activity every 23 years. In theory, global consumption will increase by about 1,600% by 2100. Given that the Earth's resources are finite, this level of consumption is clearly absurd.

However, economists see growth as the only force capable of lifting the poor out of poverty, feeding the world's population, meeting the costs of public spending and stimulating economic development. In 2009, the world's politicians responded to recession by introducing measures designed to stimulate growth. They are simply unable to face the fact that growth cannot continue, because that means telling their people that their way of life must change.

What Can be Done?

If the problems facing the human race are so serious, can anything be done? In the UK, the Government has urged people to improve the insulation of their houses, buy energy-efficient domestic equipment and turn off TVs and computers rather than leaving them on standby. Even if everybody adopted such measures, they seem to be too little too late. More radical steps are needed.

In her article in the New Scientist, Gaia Vince describes a world in which high-rise cities in Scandinavia, Russia and Greenland house much of the world's population. A vast array of solar collectors in North Africa, the Middle East and the southern USA would provide energy.

However, where would the resources to build such high-rise cities come from? We have already reached peak oil supply and other materials are also becoming exhausted. As the Earth's resources dwindle, wars over access to remaining supplies seem likely. In addition, measures to relocate the populations of hot countries to higher latitudes are surely impracticable. Anyone who thinks about the response of local people to the recent waves of immigrants can foresee riots and a growing danger of terrorism.

The respected scientist, James Lovelock, who developed the Gaia hypothesis, thinks that the human race is in trouble. He believes that Earth's population will crash from today's 6.6 billion to as few as 500 million by 2100, with most of the survivors living in the far north and south.

If you look cold-eyed at the future of the human race, the prospects look dire. Some humans may survive the 21st Century, but their lives are likely to be nasty, brutish and short. It is, perhaps, time to despair.