Bill Posters Will Be Prosecuted Content from the guide to life, the universe and everything 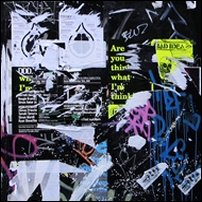 The scene is quite familiar. A small, non-franchised shop on the high street that was there yesterday suddenly ceases to exist. Any clues as to its previous use are quickly removed, and old, yellowed pages of newspaper spontaneously appear in the window, blocking any view of the interior1. You look upwards to see that an 'A1/A3 business to let/buy' sign now juts out from the first floor of the building, but this does little to explain what suddenly seems like the end of an era. Legend has it that this 'A1/A3 business' business is to do with the property's licenses but, since you're not au fait with such things, it doesn't really help. Most people would give up and walk away at this point, but you decide to take a closer look and are rewarded with the cryptic message:

Bill Posters Will Be Prosecuted.

Has the shop's owner done something particularly dastardly? When will the court hearing be? Did he actually look like a Bill in the first place? Further inspection reveals that someone has scrawled 'Bill Posters is innocent' underneath. You are intrigued, and head off to tell your friends about it – maybe you can start a campaign to save the poor fellow. Unfortunately, they all laugh at you, and you spend the next fortnight answering enquiries as to the welfare of 'your mate Bill'.

Having endured for more than a century, this sort of confusion was thankfully ended by a move towards using the phrase 'Stick No Bills'2, though gullible individuals may as a result wonder why anyone would want to attach grown men to a shop window. Alternatives such as 'Post No Bills' may prove even more confusing, and it is likely that an ideal solution to the matter is still a long way off.

Those who view the above as frivolous nonsense will be glad to hear that bill posting is very much a real pastime, and has been for a while. One 'accomplice' recalls meeting their own Bill Stickers during the early 1970s:

The dark night was quiet as we approached the University District of the city. The driver looked carefully around for a deserted back street to park the van, while Bill Stickers himself counted out a few rolled posters which advertised a forthcoming student benefit gig. I held onto the bucket of paste so that it didn't slop onto the floor of the van. We were all dressed in dark clothing, nothing out of the ordinary. I had my long hair tied back and tucked inside my jacket as a hat would have looked suspicious. Once the driver had found an unobtrusive place to leave the getaway vehicle we all stood on the pavement, finalising how the night's work was going to be organised. The plan was that Bill Stickers would make a bee-line for the nearest well-used surface where posters were known to appear by night. The driver was to stay close to the van and I was to act as look out. If we were rumbled by the police, we were to run back to the van, leaving the glue, unused posters and brushes, to make sure we were not caught with the evidence. Obviously, I was going to have the furthest to run so I was pretty nervous.

The driver held station near to the end of the street where the van was parked and I walked further past Bill, to keep a sharp look out at the other end of the section we were fly posting. If the coast was clear I would signal Bill and he would get to work, quickly pasting the wall with a large brush and slapping a poster on top of the wet glue. The posters were applied in a horizontal stretch, so that the walking students wouldn't have to stop to read, but absorb the information as they went past. Also, a run of posters would be harder to rip down by an irate shop owner, or the owners of other suitable surfaces such as bus stops, hoardings or walls as soon as the offending posters were discovered in the morning. Putting up posters was a fairly full time occupation; either they were torn down by a disgruntled ratepayer, or pasted over by the opposition Bill Stickers and his nefarious crew the following night.

If we had been caught in the midst of this fly-by-night action we could have been arrested and charged with an offence contrary to a local byelaw at the time, but I am glad to say that we were lucky to escape detection. The student benefit concert went ahead without any bother. No one in the Student's Union was aware who had printed the posters in the Art Department, no one knew who had passed the posters to Bill, no one even knew who 'Bill' was but everyone was happy with the concert. It raised money. It happened every week. It was a long time ago, but I am sure that nothing really changes.

Bill posting currently carries a £2,500 maximum fine with a £50 'on-the-spot' charge also available, and both the stickers and the company advertised can be held liable. It's therefore a good idea not to bill post on other people's property, or at least not to get caught.

1If you're lucky, the owners may have used some white emulsion on the inside of the window, thus allowing anyone inside the shop to draw little smiley faces by scraping the paint away with their finger.2A development of the equally-confusing 'Bill Stickers will be prosecuted'.