Alexander: The Tireless Conqueror Content from the guide to life, the universe and everything 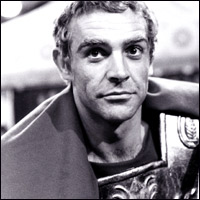 What a wonderful feeling it is to have energy and enthusiasm - to have an efficiently functioning body and the ability to formulate and carry out a plan. From the purely selfish point of view, it's irrelevant to the person expending the energy what they do with it all, so long as they're enjoying it. Scrubbing the floor, building a wall, or conquering the small nation just across the border will all provide a glow of satisfaction if there's sufficient enthusiasm, and energy to burn.

It's a sad fact that not all men and women are equally well endowed with energy and enthusiasm. Those unfortunate enough to be wanting in the energy department might be content with their lot - unaware of their deficit even - if it were not for the accusations of laziness aimed at them by those lucky enough to be richly endowed. And knowing no better - having no experience of the zip and fizz enjoyed by the energetic - those charged with the sin of 'sloth', might just hang their heads in shame. A runner would never criticise an amputee for not running. But unlike measuring and counting limbs, energy levels aren't so easy to assess. The wickedness of the low-energy 'shirker' could be cured, intermittently and in the short term, by medicating them with amphetamines. But drugs of this type can be ruinous to a person's long term health.

Why try to change them at all though? Shiftless people are generally the most harmless. Let them doze and dream. Picking fights, wreaking destruction, enslaving nations, all take a lot of 'get-up-and-go'1. Yes, energy certainly is a wonderful thing. Those who have it, and expend it with great vigour, can dazzle us into dumb admiration - even when closer examination might reveal that it would have been better for the hapless saps on the receiving end of his exploits, if that human dynamo had swallowed a tranquilliser and taken to his bed instead.

There must be dozens to choose from: industrious heroes and villains, marching their armies all over Europe and beyond, making everybody's life a misery - or snuffing them out entirely. Take just one example, as a sort of case study: a Macedonian called Alexander. This particular 'hero', a man of prodigious energy, came from a privileged background. His rich, ambitious parents2 provided him with the best tutors3 money and influence could buy. And he was, by all accounts, a good scholar.

Allegedly a descendent of other famous gods and heroes4, he was expected to be physically and mentally strong: a leader and a conqueror. And being, as he believed, a god and a son of the god Zeus5, he had every confidence in his inability to fail in anything he attempted. Under these circumstances, his attempt to conquer and rule the 'known' world, is not a surprise. That he succeeded is extraordinary. Any deluded idiot can harbour inflated beliefs about their own importance and abilities. This man also had the ability to carry out his plan. He had nerve, intelligence and charisma. And he was ruthless.

His real father (the mortal one) had already laid the foundations and put in place the structures he would require to achieve his megalomaniacal ambitions, so by the time he was a teenager, he was able to take off like a rocket. When he was still only 16 years old, he crushed a rebellion of Thracians, confirming that he was fit to be left in charge of the kingdom whilst his father went to war. At the age of 20, when his father was assassinated6, he was ready to step into the old man's sandals and expand his frontiers to the edges of the map.

It was a bloody business, involving the destruction of whole cities and the deaths of thousands of innocent people. Non-combatants young and old were slaughtered so that this tireless ruffian might achieve his aspiration of world domination - naming cities after himself7 and his horse8 along his gore-strewn way. It's estimated that he and his army, over an eight year period, slaughtered 200,000 men in battle, and about a quarter of a million residents of various towns that they attacked.

Sometimes, thrusting a sword through people, lopping off their head, burning them, or butchering their family in front of them, is just not enough if they've really annoyed the great conqueror. So when the people of Tyre said 'NO!', they got what was coming to them. Most of the 7,000-10,000 murdered there were dispatched in the usual, horrible ways - but for the remaining 2,000 or so, Alexander made a special effort, and had them crucified. Perhaps he would have honoured more of the town's folk with this fiendishly hideous torture, but it's time consuming and the great one was a busy man.

During the course of the 12 years that followed the death of his father, he led his army for thousands of miles, over mountains and deserts, through rivers and forests - but he still had stamina to spare for his wives and lovers. Being a man of some passion, when one of his friends (possibly a long-time lover) died, he was so upset that he had every inhabitant of a town close to his current encampment murdered as a sacrifice to the deceased's ghost.

Just before he reached the age of 33, Alexander died himself. Perhaps he was like one of those fires that, drenched in accelerants, burns too fiercely: a blinding light that quickly fizzles out. Whatever killed him, his death likely provoked a collective sigh of relief from his long-suffering neighbours - the ones that managed to survived his reign of terror, that is.

Saints Preserve Us From Energetic Men

The total death tolls of Alexander's wars are shocking, especially for a time before modern projectile weapons, when most killing was done up close and personal. A brief summary, excerpted from Matthew White's Selected Death Tolls for Wars, Massacres and Atrocities Before the 20th Century:

Surprisingly, this man has been, and still is, regarded as a noble warrior, and a bringer of civilisation - an early imposer of globalisation. The descendants of his own people, if not the great empire he annexed, speak his name with pride. True, history is written by the victors, but even so, knowing the scale of the havoc this man wreaked, we might expect his image to be more realistic: uglier and less romantic. He was clearly a perpetrator of atrocities. We might ask the question: in what way was he any better than that other evil despot and war monger: Adolf Hitler?

There are descendants of his victims who utter his name with contempt, and call him 'the accursed'. On the other hand, there are those, descended from people he conquered, who claim him as their own. Perhaps it's a psychological quirk of people, that they find a way to twist the facts in order to comfort themselves that they spring from vigorous, hardy stock rather than weak, powerless victims. But what's the excuse of modern western Europeans? Normally we take a dim view of genocide and tyranny. Generally speaking, we strongly disapprove of child-killers. So why do we have such a positive view of this particular butcher?

The Cult of Energy

He achieved a huge amount in his short life-time - imposing his will and culture - cutting a great, bloody swath through the peoples of southern Europe, Asia and North Africa. The expenditure of energy on his outrageous, self-aggrandising projects must have been stupendous. And we do tend to admire successful, energetic people. Those who came and saw and conquered, threaten to hypnotise us into uncritical admiration. Where Mr Hitler strayed from this 'heroic' model was not so much in the extent of the death and destruction he wreaked on the peoples of Europe, which seems to be the main reason that we loathe and despise the man, but in failing to win his savage war. He wasted all that energy!

The bloodmasters that are spoken of with respect and reverence, like Alexander 'the Great' and Julius Caesar, didn't waste their energy. If they wanted something, they took it. If they wanted to do something, they did it. They were dynamic! Inexorable! But heroes?... They were abominations: mass murderers, psychopaths. And even now, when we need fear no reprisals for speaking harshly of them, they're still spoken of with admiration.

To be is to do.
- Socrates or Plato.
Philosophers

To do is to be.
- Satre, Descartes or Voltaire.
More philosophers

To be relaxed is just an unproductive waste of time9.

1Julius Caesar, Attila the Hun, Vlad Tepes, the Emperor Napoleon, Adolf Hitler, and all their troublesome ilk, were not lazy men.2Philip and Olympias.3Aristotle, for example.4Too many to mention really, but including Zeus, Achilles, Hercules/Heracles and Europa.5A belief encouraged by his mother, implying that the mere mortal to whom she was married, was not the boy's real dad.6A killing that may have been engineered by the young man and/or his mother.7Alexandroupolis, Alexandria. 8Bucephala was named after his favourite mount, Bucephalus.9Yeah, but it's harmless, innit?