UK Girl Guide Uniforms Through the Years Content from the guide to life, the universe and everything 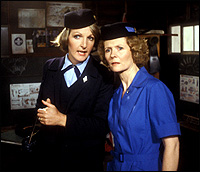 The uniform worn by Girl Guides in the UK have seen many changes since the first girls turned up wearing a mix of Scout uniform and their normal clothing, in 1909, at the Crystal Palace rally. The uniform changes in the earily years were normally down to the fashion changes of the day, then later during the Second World War because material was hard to get hold of. Then, after the war, man-made fibres were available, so again the uniform changed, making it a little cheaper to buy. Finally, during the 1990s, the uniform was changed in order to make it more practical and fashionable for the girls to wear.

Rainbows first started in 1987 for girls aged between five and seven years of age.

Brownies first started in 1914, for girls aged between seven and ten years of age.

Guides first started in 1910, for girls aged between ten and 14 years of age.

The Senior Section is for young women aged between 14 and 25 years of age.

Guiders are aged between 18 and 65 years of age.