Lana Turner - Actress Content from the guide to life, the universe and everything 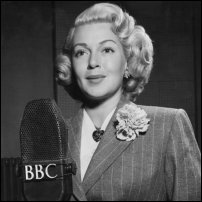 The thing about happiness is that it doesn't help you to grow; only unhappiness does that. So I'm grateful that my bed of roses was made up equally of blossoms and thorns. I've had a privileged, creative, exciting life, and I think that the parts that were less joyous were preparing me, testing me, strengthening me.
- Lana Turner

Born Julia Jean Mildred Francis Turner on 8 February, 1920 or 19211, in Wallace, Idaho, to John and Mildred Turner, she was later to adopt the stagename Lana Turner. Her father was a miner by day and at night liked to gamble. One evening, he came into a lot of money through cards and was so overjoyed that he could now afford to buy his daughter a tricycle that he bragged about it. This move was the wrong one as he didn't return home that night; instead a distraught Turner heard her father had been robbed and murdered. Consequently, she was left to form a strong bond with her mother who accompanied her to California where she would become a film star.

I'll have to ask my mother
– Turner

Turner was a canvas to be painted on, not yet marked by the trials and tribulations of life and so it came to pass that the talented Turner was talked into becoming an actress at the age of 15 by publisher of The Hollywood Reporter WR Wilkerson at The Top Hat Café. He put her in contact with an operating talent agent called Zeppo Marx who in turn introduced her to the director Mervyn Leroy. Together, Leroy and Turner devised the stage name Lana Turner.

At first she had cameo roles and was never certain whether these would end up in a movie or on the cutting room floor. In fact her role as schoolgirl in They Won't Forget, was really just that, but the shot of her walking down the street helped propel her to the dizzy heights of Hollywood's star system. Why? Because she was seen with her breasts bouncing around under a sweater. Although Turner was embarrassed by this shot and reminded of it constantly by being named 'The Sweater Girl', she helped set a trend for the garment through her fans and before long was seen as the real life version of Cinderella, growing up during the depression and struggling to survive to being a commodity that was plucked, preened and paraded around in front of many fans.

Short on playing time is the role of the murdered school girl. But as played by Lana Turner it is worthy of more than passing note. This young lady has vivid beauty, personality and charm.

This film also paved the way for more roles in such films as Ziegfeld Girl, Dr. Jekyll and Mr. Hyde and Johnny Eager and like Marilyn Monroe, Turner was seen as pin-up material.

I made my first movie without ever considering that my walk-on would be anything more than a one-time job. If I could have foreseen everything that was going to happen to me, all the headlines my life would make, all the people who would pass through my days, I wouldn't have believed a syllable of it!
- Lana Turner

However, after all this attention Turner was still not sure whether she really wanted to be an actress. Leroy thought differently though and cast her in The Great Garrick, before loaning her out to Samuel Goldwyn for The Adventures of Marco Polo.

As filming for The Adventures of Marco Polo got under way Goldwyn insisted that she enhance her physical appearance by having her eyebrows shaved off and using artificial ones in their place. After filming had finished Turner was to forever remember the film as her eyebrows never grew back and she had to use false eyebrows for the rest of her life.

Leroy also took Turner with him when he moved to MGM and as a result her pay quickly doubled. From her earnings she was able to buy a house. Another advantage to the move was that she became quite the socialite. 'We had youth, we had beauty, we had money, we had doors open to us', she recalled.

During World War Two, Turner took to the railroads and toured the country selling war bonds. Her promise to those that bought these for $50,000 or more from her was 'a sweet kiss'. 'And I kept that promise – hundreds of times. I'm told I increased the defence budget by several million dollars'.

In 1945 Turner had a new contract drawn up with MGM for which she received $4,000 a week. Under the film company she took part in a number of plays including The Postman Always Rings Twice, The Three Musketeers, and The Bad and The Beautiful.

During her life Turner was romantically linked to a number of men and was married eight times: to Artie Shaw, Steve Crane (twice), Henry Topping, Lex Barker, Fred May, Robert Eaton and Ronald Dante. Her first marriage to Steve Crane was annulled; all the other marriages ended in divorce.

In the 1950s she was pursued by Johnny Stompanato, a dangerous mob associate. Posing as a man called John Steele, Stompanato managed to wriggle his way into her life by sweeping her off her feet with romantic gifts, but when she found out who he really was two months later and wanted to call off the relationship, he turned on her telling her that she would never be able to leave him.

In 1957 Sean Connery was cast by Turner as her love interest in the film Another Time, Another Place. Despite the age difference, of over ten years between them, the couple pulled it off and rumours quickly spread that they were seeing each other off set too with Connery appearing beside her at West End shows and in restaurants. Understandably, Stompanato was furious and sought revenge. He stormed onto the film set in England with a gun and accused her of having an affair with Connery, who reacted by successfully disarming him. Stompanato was soon banned from England by Scotland Yard.

When Turner returned to the family home in America he attacked her and tried to smother her with a pillow. It was not just her fellow co-stars that showed concern either, her daughter Cheryl Crane was so worried that her mother would be killed by Stompanato that she stabbed and consequently killed him on 14 April, 1958. In court the incident was declared a justifiable homicide and Crane was acquitted.

During the 1970s and 1980s Turner spent a considerable time away from the public eye, with her only notable television appearances being in Harold Robbins' The Survivors and Falcon's Crest. She also spent time treading the boards by appearing in Forty Carats and obtained an Artistry in Cinema award from the National Film Society on 25 October, 1981.

In 1992 Turner was diagnosed as having throat cancer, due to heavy smoking. she died on 29 June, 1995. Turner requested that she did not have a funeral, so none were held. Her body was cremated with the ashes being scattered in the sea. Her maid Carmen Lopez Cruz inherited much of her estate.

[She] was capable of brilliant individual scenes, but seemed to lack the temperament or the training to sustain a full-length performance. This made our episodic film just right for her.
– John Houseman, producer of The Bad and the Beautiful

As she got more into the picture her nervousness disappeared, and she effectively made the character's transition from tramp to glamour queen.
– Vincente Minnelli, director of The Bad and the Beautiful