Lamburgers Content from the guide to life, the universe and everything

It was 1984 when the word 'lamburger' first slipped off Mike Moore's tongue and into the headlines. At the time, he was New Zealand's Minister of Overseas Trade1 and was promoting the export of small, ready-to-cook cuts, instead of whole carcasses. 'Added value' was the cry.

Back then, Sue McLeary was executive director of the New Zealand Food and Beverage Exporters Council and was closely involved in promoting meat exports.

She has been reported as saying that the lamburger was a perfect symbol for what meat exporters were trying to do. It could be manufactured in New Zealand. It was a ready-to-cook convenience food. It would introduce lamb to consumers unfamiliar with eating sheep meat and, most importantly, it would give a distinctively New Zealand twist to the iconic American hamburger. What she failed to mention was lamburgers are healthier than beef burgers as they contain far less saturated fat.

Mike Moore was amazed that this symbolic lamburger was taken so literally. But it was, at least in New Zealand. Up until then, for many New Zealand cooks, minced lamb still meant left-over roast lamb that was put through a mincer clamped onto the kitchen bench, and then made into shepherd's pie. Using minced raw lamb was familiar only to people who cooked Middle Eastern and Indian food. Now consumers expected suburban butchers to have minced lamb on display ready to take home to make the new national dish, which New Zealanders hoped would soon be popular the world over.

In the end, the lamburger craze didn't take off in a big way. Beef remained the preferred meat in the world's buns. Even today, neither McDonald's nor Burger King has a lamburger on the menu. However, the word itself still sounds as catchy as it ever did and deserves its place as an original indigenous word in the Oxford Dictionary of New Zealand English. 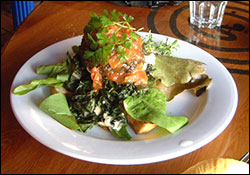 Even if you forego the bun, pickles, mayo and sliced tomatoes, and just keep the freshly grilled or fried, minced lamb patty, you have the beginnings of a delicious meal. However, even in New Zealand, the quality of minced lamb is variable. It can be coarse or fine, lean or rather fatty, and all too often there are bits of tough gristle in the mix.

A good tip is to follow the Indian method. Just add a little plain yoghurt to the minced lamb. This keeps the meat very moist, helps the patty to brown and softens the sheepy flavour. It also helps blend any spices or flavourings right through the mixture. The patties are even better if they are mixed an hour before they are cooked so that the flavours mellow.

The following recipe keeps to flavours reminiscent of Indian cooking, but the yoghurt is also a good addition if you want to conjure up the Middle Eastern flavours of cumin, cinnamon and garlic. Serve with mashed or sautéed potatoes or a rice pilaff. Or simply season the lamb and yoghurt mixture with salt and pepper, and serve the patties with mint sauce, peas and new potatoes.

1In 2000 he was Director/General of the Geneva-based World Trade Organisation (WTO).