'Picking' a Blue Crab Content from the guide to life, the universe and everything 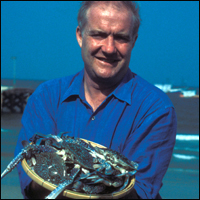 Most blue crabs come from Chesapeake Bay on the eastern coast of the United States and are considered a delicacy throughout the world. Live blue crabs intended for whole consumption or steaming - arguably one of the best ways to eat blue crabs - are purchased in bushels. Primarily, it is the male crabs that are purchased in this fashion and they are commonly referred to as 'jimmys'. The female crabs, referred to as 'sooks' are usually sold to processing plants to be used for 'picked meat'. They are usually sold in cans but also sometimes in jars. The most common use for pre-picked meat is the crab cake; a regional delicacy. Crabs come sized, which is determined by measuring their shell from point to point. The sizes are medium, large, jumbo, and #1 Jimmy. Crabs which are caught right after they've moulted are called soft shelled because the shell has not had time to harden. Often deep fried and served alone, in a sandwich, or even in sushi, soft shelled crabs are a popular treat.

There are many ways to cook blue crabs, and how they are prepared is often dictated by the region of the state you are purchasing them in. In the north-eastern region of the United States, in places like Maine, they are often baked. In the eastern states, in the Chesapeake region - most notably Maryland - they are steamed, and in the southern United States, like Louisiana, they are boiled. When a blue crab is cooked, in whatever fashion, its blue shell becomes bright red, a sure sign that it is cooked.

Regardless of how you cook crabs, there is still one basic strategy to eating the finished product which is referred to as 'picking the crab'. This is often a lengthy process which involves much socializing. Some people don't like the idea of shredding a once living creature into little pieces, but once you get past that part of the experience, it's all great fun, and a wonderfully tasty treat.

It should be noted that in and around the Baltimore Area (and the Chesapeake Region in general) there is a distinct and rigorous process involved in 'picking' one's now prepared Blue Crab, which is as follows:

However, be warned that eating crab in Baltimore or some such, and notably the entire 'picking' process, can prove to be quite painful to the hands and fingers of the practitioner, due to the numerous sharp bits of the exoskeleton combined with the 'Old Bay' Seasoning and steam contained within and without the crab itself.