Filth - What Is It Good For? Content from the guide to life, the universe and everything 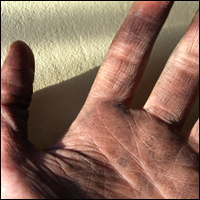 That's the impression many people have. The very idea of filth makes some of us react with revulsion. It sounds like an obscenity, an insult, an affront to everything clean and pure – something that must be energetically fought, using every weapon available. But what is it?

The OED tells us that it's 'rotting or purulent matter ... dirt esp. of a disgusting kind', among other things.

We're not talking good, honest, 'clean' dirt - or potting compost - here. It's dirtier than that! It's the kind of thing that could give you a disease, if you touched it - perhaps even if you approached it too closely. The idea that a child would pick up a handful and shove the festering 'umska' straight into its mouth (which, of course, any curious infant would if they could get within grabbing distance), might be enough to make a conscientious mother feel quite faint. The world is full of it. Step outside the sterile bubble of your home or office and there it is, almost everywhere you look - a threat to human health and well-being. It's a wonder we've survived so long...isn't it?

We are bombarded with advertisements for products that claim to be able to protect us, our children and our homes from the dangers inherent in dirty hands, teeth, hair, clothes, floors, sinks, work surfaces, toilets – anything we might touch or that might touch us, and thereby contaminate us with nasty, dangerous filth. News programmes and documentaries reinforce our fears of contamination: 'scare stories' about hospital acquired infections, legionnaires' disease misting down onto our streets from air-conditioning units, children getting toxoplasmosis from cat faeces in their own gardens.

Perhaps there's a natural human inclination to exaggerate danger on the one hand, and an equally natural inclination to over-react to perceived danger on the other. Some diseases will kill you, so it's quite understandable that many people consider it better to be safe than to be sorry. There was a time, not so long ago, when people feared catching AIDS from lavatory seats, cups and cutlery. Going back further still, anyone unfortunate enough to contract leprosy was no longer called a 'person' – they were called a 'leper', regarded as 'unclean' and segregated from the rest of society. Though leprosy itself is not very infectious, the fear of it is.

There seems to be a definite tendency towards extremism in the human psyche. So maybe it's not surprising that, in our efforts to be clean and to be seen to be clean, we may be going too far. There must be some moderately grubby state on the continuum between filth and squalor at one extreme and sterility at the other, where we could be mentally and physically comfortable.

What's Wrong with Being Clean?

We don't want to contract diseases or host parasites1. A clean environment minimises our risk of coming into contact with things that might infect us, but there are other risks to human health that are caused or exacerbated by our obsession with the removal of dirt. The 'hygiene hypothesis' suggests that allergies that were rare just a generation ago are increasing as a result of our efforts to isolate ourselves from the very things that our immune systems exist to fight.

The number of children suffering from peanut allergy has, reportedly, doubled in the last decade, and cases of asthma have trebled in the last 20 years. Excessive cleanliness is also blamed for increases in eczema, hay fever and even diabetes. Unsurprisingly, the common factor in all these diseases is the involvement of an over-excited immune system.

In a culture that is so obsessed with cleaning and washing, it's unsettling to read that we may also be soaping and scrubbing away protective layers of skin together with the filth, and thereby enabling particles to penetrate and cause allergic reactions.

So, What's Going On With The Immune System?

The immune system has been evolving for billions of years - ever since a small living thing first had the temerity to attempt to take up residence inside a larger living thing. The parasitic way of life has been a great success, but only because parasites are incredibly adaptable. We still host these parasites, just as our ancestors did, and we still have the same defences as our ancestors. Those defences are geared towards the parasites and diseases that plagued us in the past, as our ancestors are those whose immune systems protected them against infection so that they survived long enough to reproduce.

The immune system has grown to be complex with many facets. Broadly speaking, it has two parts: an innate system that attacks intruders, and an adaptive system that remembers individual infections so that old enemies can be quickly recognised and labelled for attack with antibodies. The 'hygiene hypothesis' states that these two parts are in a balance – if the innate system doesn't have any intruders to attack, then the adaptive system starts working overtime, producing antibodies against things it shouldn't: 'allergens' such as pollen, peanuts and shellfish, and even the body's own cells2. Once the body has learned to produce antibodies against allergens, they are remembered as old enemies and the immune system attacks them every time they are present.

The problem may therefore be that, stimulated or not, the immune system simply needs a job. While there are no real enemies, it may have to keep itself in training by engaging in battle with harmless, everyday materials. When it overreacts, we experience diseases such as hayfever or dust mite allergy, the symptoms a direct result of our body desperately fighting an otherwise harmless substance.

Whatever the specifics, it would seem that our fastidious cleanliness may have triggered the law of unintended consequences.

Can It Be Fixed?

What we need is a modicum of a challenge – something to keep our immune systems focused on the real enemy. We need some muck in our lives: not too much, just enough to keep us fit. A little something to inoculate us, so to speak – to prevent gratuitous attacks by the body's defences against itself, or innocuous substances that represent no threat.

Some of the answers suggested by science might be enough to put you off your breakfast. A few decades ago, it was noticed that people infected with hookworms didn't suffer from conditions ranging from asthma to Crohn's disease. So some courageous British scientists at Nottingham University infected themselves with the larvae of these worms to see whether they would suffer any harm. They survived and the worm 'cure' caught on.

Another idea, not quite so repellent as the hookworms, is to use bacteria found in soil to make a vaccine. Far more agreeable than either of the above, however, is the suggestion that children who grow up with dogs and cats have a reduced risk of developing allergies3.

The simplest suggestion of all might be to seize the excuse to be just a little bit more of a slob. Ignore the media scares and the adverts for cleaning products – if your table has more germs than your toilet seat (as the adverts suggest) and you still survive the day, you can feel vindicated in your decision. Spend your money on something more indulgent. Don't worry. Be happy!4

1Although we may think of parasites and infectious diseases as two different things, the viruses and bacteria that cause diseases are also parasites. Prion diseases, on the other hand, although infectious (and morbidly fascinating), are not parasitic.2Of course, some people are genetically predisposed to this sort of thing, and diseases such as asthma and eczema may run in families.3It's worth noting, though, that cats and dogs may make things worse for children who have already developed asthma or eczema.4And if you do catch the lurgy from a dirty telephone, well that's life. We all have to die of something.