Uxmal - The Mayan City Content from the guide to life, the universe and everything 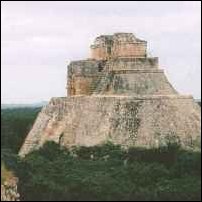 Uxmal1 is the ruin of a Mayan city, located in the Yucatan province of Mexico. It has been a UNESCO World Heritage Site since 1996. A powerful city during its heyday, it has become a firm fixture on La Ruta Maya2 due to its accessibility and its distinctive architecture.

Architecturally, Uxmal is the classic example of the Puuc style. The buildings themselves consist of carved stone façades over a concrete core, usually with a decorative geometric frieze above head height. The concrete core was a definite technological advance over earlier Mayan building styles, and allowed the Puuc peoples a greater degree of freedom in their architecture. Another distinctive feature of Puuc is the preponderence of Chaac faces. Chaac was the Mayan god of rain, and important to all the Mayan peoples, but Puuc takes this to the extreme, probably reflecting the region's reliance on rainwater rather than cenotes3. Chaac's face, represented by owl-like ringed eyes and an elephantine hooked trunk, features on many of the buildings, often stacked in columns at the corners.

Several smaller sites around Uxmal are linked to it by raised roads called sacbes, and also reflect the Puuc style; Kabah in particular takes the fascination with Chaac masks to the level of obsession, with the rectangular building called the Codz Poop being covered literally without a gap by hundreds of faces in such profusion that it becomes hard to tell how the eyes and noses relate to each other. Labna is another nearby site that demonstrates the Puuc style well and, along with Sayil, makes up the remainder of La Ruta Puuc and the UNESCO site. The Puuc style is also visible at several minor sites in the region, and its influence can be seen at Chichén Itzá.

Like most Maya sites, Uxmal consists of a collection of temple-pyramids, palaces, ball courts and other important structures. The homes of most residents would have been made of wood, and have not survived. The names by which the buildings are now known were given to them by European settlers, and are of highly variable accuracy.

The Governor's Palace is a rectangular building in three sections, with a very long façade. Raised on a platform, it was clearly a palace or other important structure, and its decorative frieze is the longest known Mayan example.

The Nunnery is a quadrangle, four decorative walls surrounding an open square4. Although looking like a single structure at a casual glance, each of the four sides is actually quite different and they were probably constructed over the course of several centuries. The name is a misnomer, referring to the layout that reminded the Spanish who first saw it of a cloister. It was more likely a noble residence, like the similar (but smaller) House of the Birds and House of the Turtles nearby at the site.

The Pyramid of the Magician is unusual in that it has an oval base rather than a square one. As was usual with Maya temple-pyramids, it was enlarged several times, and it is only the fifth and final phase that has the unique oval structure. Since the final stage was built off-centre, the fourth temple can still be accessed, giving a curiously asymmetric look to the finished structure. According to a legend frequently trotted out by tour guides, the magic midget Itzamna built the entire structure in a single night. Nowadays, the ruin is the centre of an elaborate son et lumière (sound and light) presentation.

A lot of restoration work has been done on the site. Black Spiny-tailed Iguanas (Ctenosaura similis) laze on well-kept lawns around the Nunnery, and a tangle of cables around the Pyramid of the Magician betrays the workings of the light show.

Little is known of the history of the site. Legend has it being founded by an individual named Hun Uitzil Chac Tutul Xiu in 500 AD. It appears to have been most active during the Late Classic and into the Postclassic - roughly 700 to 1100 AD. It achieved quite a degree of political power in the region, particularly while in alliance with Chichén Itzá, and reached its apogee from around 850 to 950 AD. From the dates, it is likely that Uxmal benefited from a power vacuum caused by the collapse of the Mayan powers in the lowlands to the south. It was certainly well positioned for the Posclassic recovery, as the centre of Maya power shifted northwards towards the Puuc region.

One of the few rulers of Uxmal that we know by name is Chan Chak K'ak'nal Ajaw, or 'Lord Chac'. He ruled around 890 - 910 AD, and supervised the construction of many of the most impressive buildings at the site. However, unlike many of the lowland Maya sites, we do not have a comprehensive list of rulers of Uxmal, partly because the Puuc style did not lend itself to glyphic carvings, and much of the governing may have been done by a council of rulers (Mul Tepal) rather than an individual lord.

Uxmal remains, therefore, one of the most impressive and mysterious of Mayan sites.

1Pronounced oosh-MAAL, and usually translated as 'Built Three Times'.2A loose term for any tour of the restored Mayan cities in the Yucatan, Guatemala and Belize.3Sink-holes leading to a natural underground reservoir that are the primary source of water for most of the Mayan region.4Actually slightly trapezoidal.