Chichen Itza - the Mayan City Content from the guide to life, the universe and everything 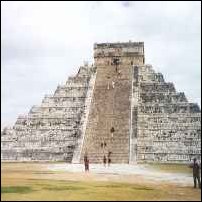 Chichén Itzá is the ruin of a Mayan city, situated in the Yucatán area in the east of Mexico. It has been a UNESCO World Heritage Site since 1988 and was voted one of the New Seven Wonders of the World in an internet survey in 2007.

The site is one of the most famous Mayan ruins, and is divided into two unequal sections known as Chichén Viejo and Chichén Nuevo (the old and new sections). It is also one of the more mysterious sites, with an unsettled debate as to how it shares characteristics with the far-distant Toltec civilisations of the Mexican highlands. The name translates roughly as In the Mouth of the Well of the Itza (the Itza being a branch of the Mayan people).

Chichén Itzá has existed since at least 600 AD, although it first rose to prominence towards the end of the Classic period, at around 850 AD. Circa 1150 AD, a new and larger wave of building took place, probably due to an alliance with immigrant tribes known as the Xio and Cocom. These were offshoots of the Toltecs from the north, and for a long time archaeologists believed that this was simple conquest. More recent evidence indicates that the links between these two civilisations may be more complex. Sometime around 1221, several of the buildings were burned. This almost certainly indicates a civil war, and Chichén seems not to have ever fully recovered from this. It remained a place of religious ceremony, but by 1400 AD was virtually deserted. Although never totally abandoned, it became a ruined ghost-town, and remained that way until the arrival of the conquistadores.

'New Chichén' is the larger and better preserved section. Its main pyramid-temple, known as El Castillo or The Temple of Kukulcan, is one of the emblematic ruins of Mexico and nowadays sits amid well-manicured lawns and seas of tour groups. Like many Mexican pyramids, it was built over an older, smaller pyramid. This has had the effect of preserving the inner pyramid, which at one time was open to tourists.

When discovered, this inner pyramid was topped with a seat made of red stone inlaid with jade markings. This has become known as The Jaguar Throne, and was considered enigmatic at the time as it seemed both to show Toltec influence and to predate the arrival of the Toltecs.

Although the design of the Temple of Kukulkan is simple - a plain stepped pyramid with a stairway on each face - it seems to have great numerological significance. Each face has 91 steps which, combined with the single step at the base, gives a total of 365 steps. At the autumn and spring equinoxes, the shadow of the pyramid is cast onto the balustrade of one of the staircases, giving the impression of a serpentine body that links to the carved snake-head at the bottom.

There are several Ball Courts at the site. The main one is the largest that has ever been found, and probably the largest to have existed. It is also notable for the quality of its carvings. One of these shows a ball player being beheaded, and constitutes the primary evidence that losing teams were sacrificed.

The Temple of the Warriors is a very unusual structure for the Maya. A low, broad pyramid is flanked by an L-shaped pillared cloister called the Thousand Columns. This would originally have been roofed and probably used for viewing parades. On top of the pyramid is an altar in the shape of a reclining figure known as a Chac Mool. All of this is strikingly similar to features found in Tula, the Toltec capital.

There are also several raised platforms. One of these, Tzompantli, features skull carvings that are again highly reminiscent of the Toltecs of central Mexico.

The Sacred Cenote seems to have been a place of sacrifice, as well as the main water source for the city. Jewellery and human remains have been found in its depths, which the Mayans believed was an access point to the Underworld.

Chichén Viejo ('Old Chichén') is, as the name implies, the older part of the ruins, possibly dating back as far as 400 AD. It includes a unique, domed temple, and is clustered around a now-dry cenote. It is situated a little distance from the main site, and nowadays has a more overgrown feel to it as the surrounding jungle has not been cleared as extensively and is less packed with tourists. Chichén Viejo is smaller in extent than Chichén Nuevo and lacks the Toltec style, making it more typical of other Mayan cities in the Puuc style. It does have some unique buildings, notably El Caracol ('The Snail') a domed building looking for all the world like a modern observatory (and sometimes described as one, though it should not be confused with The Observatory at Palenque). Other well-known buildings go by the Spanish names of Las Monjas ('The Nunnery') and La Iglesia ('The Church'), and the Mayan name Azab Dzib ('The House of Mysterious Writing').

Many parts of Chichén Nuevo appear to show a heavy influence from the Toltecs, another indigenous Mesoamerican people with their main city at Tula (just outside modern Mexico City). Examples include the carvings of warriors on the Thousand Columns, which are reminiscent of the Atlantes at Tula. It is sometimes claimed (though highly disputed) that this may be due to the arrival of a Toltec king, perhaps called Quetzalcoatl, in 987. This is based on Tulan and Mayan legends that describe such an event. Other similarities between the two cultures include a much greater emphasis on human sacrifice in Chichén Itzá than at other Mayan cities, and the predominance of the cult of Kulkulkan (known as Quetzalcoatl to the Aztecs and Toltecs).

More recently, this theory has run into trouble as revised dating has placed Chichén Itzá earlier than the Toltecs, suggesting that influence may have run in the opposite direction to that indicated by mythology. Chichén Itzá is now seen as a continuation and development of the Mayan styles, and it may be Tula that shows foreign influence. If so, much of Mayan culture appears not to have made the transfer, including worship of Chac.

As things stand, therefore, it is clear that there is a strong link between Tula and Chichén Itzá; what is not clear is the direction of the influence or its cause.