The India-Pakistan Conflict Part 1: Origins Content from the guide to life, the universe and everything 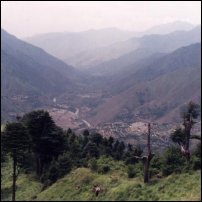 The conflict between India and Pakistan has been going on for decades - ever since both received independence from Britain in 1947. In 1999 it reached its most dangerous point when some Afghan Mujahideen, backed by the Pakistani military, crossed the Line of Control in what is Indian-administered Kashmir. The conflict reached a point where countries such as the US and Britain became concerned that nuclear conflict might be an outcome, since both India and Pakistan had weapons that were capable of carrying nuclear warheads and both had previously tested nuclear missiles. This five-part Entry presents some background history of the Indian nation with specific concentration on the 'Line of Control' in Kargil.

The region of Kargil lies at the foothills of the Himalayas. It is considered to be one of the most inhospitable areas, surrounded by mountains and hills which can vary in height from 12,000ft to 18,000ft above sea level. During the winter the temperature can drop as low as -60° celsius.

The town of Kargil, consisting of a majority Muslim population, lies on the 'Line of Control' which faces the Pakistan-occupied Kashmir region of Baltistan Zanskar and is spread over 14,086 sq km. A national motorway, 1A, connects it to the Indian-administered Kashmir capital of Srinagar. The region, part of the Leh Ladakh region of Kashmir, offers a huge advantage to anyone occupying any of the hills or the mountains, as they would be able to oversee the complete area without being spotted.

The British Raj in India

By the 1800s, the Mughal (a member of a Muslim dynasty of Mongol origin that ruled large parts of India from 1526 - 1857) Empire was in decline. The British were setting foot in the country, with the creation of the British East India Company.

In 1819, the princely state of Kashmir was captured by the Sikhs, enabling it to be a part of the Punjab region. Then, in 1846, it was re-taken by the British East India Company and handed to Maharajah Gulab Singh, who ruled the states of Jammu and Kashmir, in response to his assistance in the war in Afghanistan (relating to the Opium War).

In 1857 there were murmurs of discontent in the native army of the East India Company. When rumours began to spread that the cartridges being used in guns contained pig and cow fat grease, the authorities ignored it. The situation was ignited when one of the Indian soldiers, Mangal Pandey, was executed. Soon it led to what became known as 'The Great Indian Mutiny' or 'The Sepoy Mutiny'. The massive outcry that followed enabled the British government, under liberal politician Viscount Palmerston, to take control of the subcontinent from the company.

From the early 1900s, and more so after 'the massacre of the innocents' at the Golden Temple in Jallianwallah Bagh, Amritsar, in 1919, there were calls and movements aimed at forcing the British to 'Quit India'.

In the 1930s, round table talks in London, which Mahatma Gandhi attended, one of the questions that kept being asked was what would happen to the princely states such as Kashmir after independence? At the same time, some Muslims began to feel they should have an independent state of their own. This idea gained momentum when Mohamed Ali Jinnah resigned from the Congress party, of which Jawaharlal Nehru was a member, and joined the Muslim League.

As World War II broke out in 1939, the question of an independent, united India was put on hold even though some in the country felt it was the right time. Gandhi disagreed with them and insisted it was the wrong time. What still remained to be sorted out was the question of the princely states. When the war ended in 1945, the Labour party came to power under the leadership of Clement Atlee. Atlee appointed Lord Mountbatten as the last viceroy to India. His main task was to grant independence. He was handed the job because of his knowledge and experience of the region during the conflict, and his position as the Supreme Allied Commander in South-east Asia.

Within two weeks of his arrival, the viceroy had met the Muslim leader Jinnah at least six times. Although they disagreed on a lot of things, they agreed on one point: the need to move rapidly towards independence.

Jinnah warned the viceroy that if a speedy division of the country didn't take place it would perish. In return, Mountbatten expressed his concerns that the division would lead to bloodshed and violence. The Muslim leader reassured him that once the 'surgical operation' had been completed all troubles would cease and the two countries would live in peace.

Mountbatten, in his position as viceroy, also met leaders of the Congress party, including the Mahatma. He went as far as to assure Gandhi that partition of the country would be the last option, but it soon became likely. The 'father of the Indian nation', Bapu, as everyone called him, proposed an idea to the viceroy. He would ask Jinnah and the Muslim League to form a government and hand power to them. The viceroy replied that he would consider this so long as the members of the Congress party accepted it. Gandhi assured him they would. Sadly this was not to be and partition became a reality.

The job of drawing border lines went to a barrister in England, Sir Cyril Radcliffe, who knew nothing about India, or even where the states of Punjab or Bengal were. At the same time Nehru and Jinnah were unable to agree on where the border line would be, and Gandhi was totally opposed to it. Therefore the plan for partition lay squarely on the viceroy's shoulders.

The lines that would soon be drawn up would separate thousands of people, many would be displaced, and the lands divided. This led to riots pitting Hindus against Muslims, and slogans such as 'Death to Hindus' and 'Death to Muslims' could be heard. The Mahatma and others soon began to appeal for peace. In the meantime, Nehru came up with the idea that the viceroy should be appointed as the First Governor General of India. This idea was also suggested to Jinnah, who had been informed he had a limited time to live as he was suffering from terminal cancer. Instead, he rebuked it by taking up the position himself, and at the same time insisted that Pakistan should receive its independence first, and then India, and that India change the words to its national anthem as both sounded similar.

Finally, it was decided that Pakistan would be awarded its independence on 14 August, while India would receive it on 15 August — at midnight. This meant time was running out for Sir Cyril, who was sitting behind closed doors amid tight security, to complete the redrawing of the map of India which now showed two separate states — India and Pakistan.

As Sir Cyril continued drawing the map, a mass migration between the two sides began. The division of the country did not just mean the division of lands but also property, families, furniture and small items such as kitchen utensils as well; for many it was unbearable. Riots exploded throughout the cities, towns and villages, and began to spread like wildfire, as did fanaticism. Many Hindus thought the Mahatma, who was campaigning for peace and was against the division of the country, had given away too much to the Muslims. It was at this time that some people began to hatch a plot to assassinate him. Many people were not even aware that the land they owned and worked on would soon become a border line, or, in some cases, not the country they had hoped to be living in.

On 14 August, 1947 the state of Pakistan came into existence, and India received its independence at midnight on 15 August. However, some princely states, such as Junagadh, Hyderabad and Kashmir, remained undecided, even though some had either joined India or Pakistan. While everyone in both countries celebrated their freedom from over 200 years of colonial rule, Gandhi, on a fatal fast, sat in his ashram (a commune or communal house whose members share spiritual goals and practices) spinning cloth.

A mass migration started from both sides, which was soon followed by riots, and millions were misplaced. The Hindus and Muslims began to kill each other. Once again, the Mahatma walked to towns and villages to preach peace and peaceful coexistence. And, as more and more people became misplaced, refugee camps were set up in various parts of India by the governor general's wife.

The Assassination of Gandhi

On 30 January, 1948, as Gandhi walked alone towards a prayer platform outside Birla House in Delhi, a Hindu fanatic by the name of Nathuram Godse stepped forward from the crowd which was cheering for the 'father of the nation', paid his respects by touching the Mahatma's feet, pulled a gun and shot him three times. The dying Gandhi looked up at the sky and breathed his last words: 'Oh god! Oh god!'

The old man who had achieved peace between the rioting Hindus and Muslims just a few days before, and who led the freedom fight, was now dead. Since the assassin was not known, the governor general of India, Mountbatten, instructed the troops to be put on full alert as he feared riots again. But there were none.