Aircraft of the Isle of Wight: 1960 - 2000 Content from the guide to life, the universe and everything 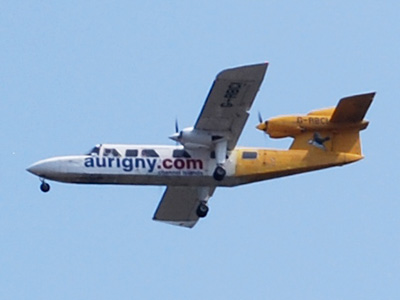 In 1949 John Britten and Desmond Norman, one-time apprentices at the de Havilland aeronautical engineering training school, formed a partnership with the aim of building new aircraft. Their first plane, the BN-IF Finibee, made its maiden flight on 26 May, 1951. Although not as successful as they had hoped, it still survives, and is in the Southampton Hall of Aviation. The partners then, for a time, abandoned the idea of building planes, concentrating on converting training aircraft into planes that could be used for crop-spraying. They also designed crop-spraying equipment, creating the Micronair Rotary Atomiser. As another string to their bow, they formed a company called Cushioncraft, to build hovercraft. This, in 1972, was taken over by British Hovercraft Corporation1.

Britten and Norman, based in Bembridge on the Isle of Wight, were still interested in building aircraft. When they noticed that there were no low-maintenance, rugged aircraft capable of using short runways on the market, they decided to make one of their own. The BN-2 Islander was designed in 1963, and made its maiden flight in June 1965. A few days later it appeared at the Paris Air Show. The Islander, a twin-engined plane, with accommodation for nine passengers, soon became popular. By 1968 more than 200 had been made. These well-designed aircraft provided a reliable service in at least 27 different countries. They are still being built today, with over 900 assembled using the original design. The Islander now boasts the longest production run of any post-war British aircraft.

Different variations were tried. The first, the BN-3 Nymph, was a smaller, single-engined version. Only two prototypes were built. Neither made it into commercial production. On 11 September, 1970, the BN-2A Mk III made its maiden flight. It was a three-engined, 17 passenger plane, and was soon named the Trislander. 81 Trislanders were built. An American version is currently being made by the International Aviation Corporation. This plane is known as the Tri-Commutair and are the main aircraft servicing the Channel Islands. They are also popular with numerous American airlines. The Trislander was the first and, so far, the only three piston-powered passenger air transport.

In 1971 the first Defender was built - a larger, military version of the Islander. Over 200 have been built so far. Other ideas were the BN-4, an even larger Islander capable of carrying 21 people, and the Mainlander, a three-engined STOL prop-jet for up to 100 passengers, yet nothing came of either design. Sadly, John Britten died in July 1977. New models were designed in 1981, 1991 and 1994. By 1998 over 1,200 Islanders had been built. They are still being produced at Bembridge.

Desmond Norman also established NDN Aircraft, at Sandown, Isle of Wight, in 1976. This company produced the NDN-1 Firecracker. This plane first flew in May 1977, but did not win a production order. In 1983 a turbine version made its maiden flight, and three were built. They too failed to make any impact. In 1981 the tandem-seated NDN-6 Fieldmaster was built and flown as a crop-sprayer. Oil-pollution clearance and fire-fighting versions, known as the Firemaster, were designed as well. At least five were built. NDN Aircraft changed its name to Norman Aeroplane Company and, in 1984, the NAC-1 Freelance was built, based on the BN-3 Nymph. Only this prototype was assembled.

In 1976 Britten Aviation Technical Services was established at Sandown. This company tried to develop a twin-engined pleasure aircraft called the Sheriff, but it failed. Wight Engineering at Shanklin built parts for the Edgley EA7 Optica surveillance aircraft. This was not a commercial success.

In 1983 ARV Aviation was established at Sandown Airport by Richard Noble2. The company designed the Super Two, a small, light plane with a two-stroke engine. Thirty were sold in total before 1991.

In 1985, the British Hovercraft Corporation3 was renamed Westland Aerospace. The East Cowes workplace now concentrated less on building hovercraft and more on building composite engine nacelles4 for the de Havilland Dash-8 and wings for the Short S330. Within ten years, over 60% of the world's turboprop nacelle production took place at East Cowes. Aircraft supplied included the Dornier 328, British Aerospace Jetstream 41, the Saab 2000, the C130J Hercules (in 1993) and in 1995 the Dash 8-400 series. They also provided components for turbofan nacelles for the French SNECMA CFM 56-5C2, the McDonnell Douglas MD-11, as well as building parts for the Boeing Globemaster, Boeing 747 and 737.

As Westlands, they provide helicopter structures for the Westland EH101 Merlin as well as equipment for the Wessex, Sea King, Lynx and Puma5. They also make long-range fuel pods for the Boeing Chinook helicopter. In 1983, the company won the highly sought-after contract to construct the Mast Torque Sensing System for the revolutionary Bell-Boeing V-22 Osprey tilt-rotor aircraft.

In 1994, Westland Aerospace was taken over by Guest, Keene and Nettlefold, to form GKN Westland Aerospace. Since then the East Cowes workers have been working on the huge fan cowl doors for the Airbus A330 and the tailcone for the Canadair CRJ-700. In 1998 Lockheed Martin ordered nacelles for the C27J transport.

The Isle of Wight has had considerable success with its aircraft industry. This is especially notable considering the small size of its companies. It may not have produced many world-changing aeroplanes such as the Spitfire, Harrier or Concorde, but it has played a significant part in aircraft history, culminating in the SR.A1, the Princess and the launch of the Prospero satellite.