Horndon-on-the-Hill, Essex, UK Content from the guide to life, the universe and everything 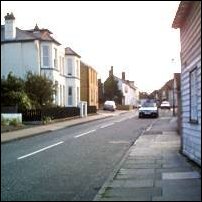 Horndon-on-the-Hill is a small, rural village mostly built on the top of a hill, and surrounded by fields and farmland. It has a population of around 2,000 and is situated in Essex, about 20 miles east of London.

Looking along the road from the top of the hill, the combination of assorted buildings, which include weatherboarded cottages and brick houses from many different eras over the centuries, allows them to flow together in a natural way.

The Domesday Book lists Horndon-on-the-Hill as Horninduna. This name appears on a Saxon coin of Edward the Confessor (1042 - 1066AD) and suggests that Horninduna was once the site of a late 10th Century, royal Anglo-Saxon mint - one of just three in Essex.

All the main buildings are situated on the main road at the top of the hill, indicating that Horndon was once a linear village. The road at the bottom of the hill is now a dead end, due to it being blocked off when the A13 was re-routed in the 1980s. There is a turning point, about a mile before the end of the road.

For a small village, Horndon has many historical buildings, including its pubs, churches and school; there is also a Thurrock Heritage listed building. There are two pubs: The Bell Inn and The Swan. Both were built during Horndon's prosperous wool trading era to accommodate the many travelling pilgrims, wool merchants and tradesmen; they have both retained their original names. A book about historic Essex, published in 1979, states; 'In this village there are more than a dozen buildings, including the church of course, which are listed as of historical and architectural interest'1. Whether all those buildings remain is uncertain.

Philip Conrad Vincent, inventor and designer of the Vincent motorcycle, stayed with his uncle at High House during the school holidays. In his factory, which he purchased in 1928, he later produced the Vincent motorcycle. His slogan 'The World's Fastest Standard Motorcycle' was backed up by numerous wins in motor racing and the setting of world speed records. The factory ceased production in 1955. To motorbike enthusiasts, the Vincent Black Shadow series is considered a classic. Vincent is buried in Horndon's churchyard. In recognition of Vincent's success, Thurrock Heritage awarded High House with a listed building status. The commemorative plaque states:

Philip Conrad Vincent, 1908 - 1979. Inventor and designer of the legendary Vincent motorcycle lived in this house.

Now known as the Woolmarket, this is a 16th-Century building with three small casement windows underneath an old tiled roof, with timber gable ends. It was built as 'pillared market house' - an auction room for the wool trade - where sales were held and attracted buyers from overseas. There was also a second storey, which was used as a Manor courtroom.

In the 15th and 16th Centuries, Horndon (or Horninduna, as it was known then) was a thriving wool-trading village. It was situated on the main route from East Anglia to Kent and the Channel ports (also with easy access from nearby Mucking and Fobbing), where many travellers - including Dutch - moored their vessels; as well as ferries crossing the Thames, to and from Tilbury. It was an ideal place for wool trading, which brought many travelling merchants and traders to the village.

When the wool industry started to decline in the mid-17th Century, the owner, William Kingston, used the Market Hall to house poor widows and as a public meeting place until its closure in 1955, due to being ruled unfit for further habitation.

In 1969, the local authority granted £10,000 for its restoration. Upon completion it was renamed the Woolmarket, and is now used as a village hall for various meetings and functions.

The Bell Inn, dating from the 15th Century, has won numerous awards for its food, wine and beer. There is a residents' area of 16 rooms, which have names such as the Josephine Suite, the Anne Boleyn Suite, and the Madam du Barry Suite.

This pub has the rather unusual custom of attaching a hot cross bun to the ceiling beams each Good Friday. This practice started in 1901, when Jack Turnell became the new landlord of the Bell and marked the occasion by hanging a hot cross bun from a beam in the saloon bar/restaurant. This tradition has continued, with another added to it: the oldest available villager hangs the 'bun'. Due to rationing during the war years, the 'buns' from that time were made of concrete.

There is a darker side to the Bell's history. During Mary Tudor's troublesome reign, a local landowner, Thomas Higbed, was accused of heresy. He was put on trial, found guilty and sentenced to be burned at the stake. This execution took place in an area at the rear the Bell.

A plaque on a wall at the Bell Inn states:

'This just shall live by faith' [Hebrews 10:38]. On 26 March, 1555, Thomas Higbed, a gentleman of Horndon House, was burnt at the stake in the courtyard of the Bell Inn for his Protestant faith.

Built in the 15th Century, around the same time as the Bell Inn, the Swan takes its name from the wild swans on the Thames marshes. In Horndon's busy and prosperous trading times of the 15th and 16th Centuries, the courtyard and stables of the Swan would be full of coaches, carts and wagons; the vehicles of travelling traders. The stables in the Swan's courtyard, which could house up to ten carthorses and four shires, were later demolished to make way for a car park.

There is very little recorded of the Swan's 500-year history. The interior is of a traditional design, with the walls displaying decorative china plates and jugs (of both china and copper). A leather hot-air balloon hangs from one corner, with the coats of racing greyhounds on a nearby wall, and the usual pictures.

In contrast to the traditional decor of the rest of the pub, the ladies' toilets are painted purple and lilac, with grapevines and bunches of grapes stencilled as a border around the top of the walls. A small chaise longue2 sits opposite the wash-basins, which have a curtain below them and a large, wooden-framed mirror above. There are a few black-and-white, framed pictures of naked and semi-naked men; pleasantly sensual, though not pornographic.

Hill Top Hotel and restaurant is, as the name suggests, situated at the top of the hill. It is next to High House, the listed building, and between the two pubs. However, it is unknown whether it is still a functioning hotel.

The parish church of St Peter and St Paul was built in 1315 and stands on the site of a much earlier construction. The oldest part of the present building was consecrated in 12303. Inside the church, there is a wonderful 15th Century belfry frame constructed of large timbers jointed by wooden pegs. In the days before clocks or watches, it was the bells of St Peter and St Paul that sounded at dawn, signifying it was time to rise, and rang again at dusk, for curfew.

It is alleged, though not proven, that Anne Boleyn is buried in the churchyard. This story stems from Anne's parents having connections with nearby Corringham.

The Wesleyan Methodist chapel was built in 1890. In October, 1990, the community celebrated its centenary of worship in the current Chapel. The first meetings were held in 1866 and the first wooden weatherboard building was constructed in 1885. Although the Methodist history goes back further than that, it was in 1850 that one woman started delivering tracts4.

The original building of the Church of England primary school was built in 1847, as a National School. Over the years, as the local population grew, more classrooms - both permanent and temporary, mobile ones - were added. More recently, new permanent buildings have been built on the old school site to accommodate approximately 200 pupils. The original building is used as the school's nursery, rather than part of the actual school. At some point in the past, there was a private schoolhouse for the children whose parents could afford to pay for their education. Little is known about the schoolhouse, other than it existed, as it was purchased and converted into a private dwelling.

Horndon currently has just two shops, the Village Butcher and Country Fayre, which comprises a newsagent, general store, off-licence and a post office. The latter is attached to the shop, but situated at the rear.

While most of Thurrock has had its traditional red telephone boxes replaced with their modern counterparts, Horndon is one of the few places that still has the old red ones.

Although most of the gardens of the local houses are of a reasonable size, there are self-managed allotments available to provide extra growing space. Plot holders from outlying areas, as well as locals, grow their own fruit and vegetables.

Horndon has a large recreation ground, locally known as 'the rec', which has a children's park and play area, as well as huts used for Brownies, Guides and Cub Scouts, etc. It is also the venue for Horndon's cricket club. During the Feast and Fayre weekend, a section of the rec is used as a car park for visitors to the village.

A locally-established and well-known firm of father & son blacksmiths took over an area formally occupied in the 1950s by some old stables. Although they are situated in a rural area, the blacksmiths are not farriers5: they are more of the artistic type, mostly contracted to design and make metal fencing and gates.

Originally founded by Royal Charter in the 13th Century, the Feast and Fayre was revived in 1974. Every year since then, on the last weekend in June, the main road of the village is closed for its annual Feast and Fayre, which attracts many visitors. Each year, a different theme is used for the two-day event, which includes craft stalls from local charities and organisations as well as home-made cakes, street entertainment, music, a couple of barbecues and a fun-run, as well as locals and visitors dressed in the chosen theme.

1Reference: Around Historic Essex by Stan Jarvis.2A reclining chair with a long seat that supports the outstretched legs.3The church is locked when not in use.4Leaflets or pamphlets containing a declaration or appeal, especially one put out by a religious or political group.5Those who shoe horses.